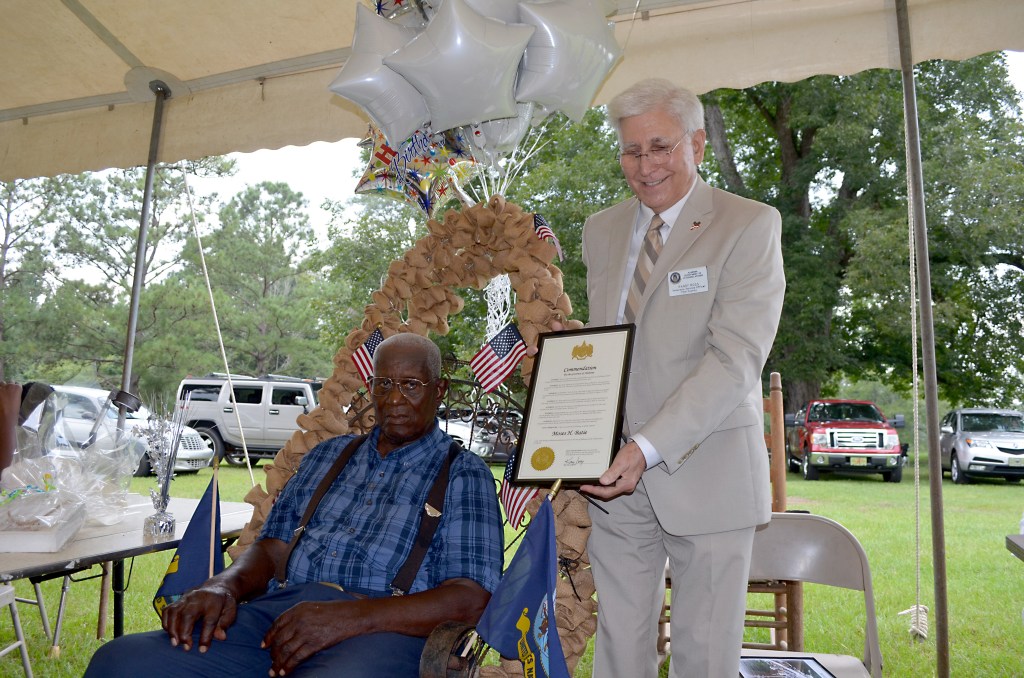 Batie said that’s the way he has lived his life, one day at a time and making the best of each day as it comes.

A large crowd gathered on a hot, first day of August to wish Batie the happiest of birthdays.

One-by-one his birthday guests paused to remember special times with him.

A highlight of the afternoon was the presentation of a commendation by Governor Kay Ivey to Batie. The presentation was made by Pike County Veterans Affairs Officer Randy Ross.

“Governor Ivey has recognized Mr. Batie for his honorable and faithful service to the state of Alabama and the United States,” Ross said. “Mr. Batie enlisted in the United States Navy on March 24, 1945, and served aboard the USS Chief, which was a minesweeper in the Pacific Theater during World War II. On September 8, 1945, the USS Chief sailed to Japan and swept for minefields in preparation for the arrival of occupation forces following Japan’s surrender on August 15, 1945.”

Ross said Batie and his crew remained on occupation duty in Japan until March 10, 1946, when the USS Chief steamed for San Francisco arriving on April 19, 1946. Batie was discharged from service on April 29, 1946, and returned home to Pike County and the farming way of life.

“Moses Batie had a strong desire to serve the people of Pike County and was elected to the Pike County Commission and served three terms,” Ross said.

Brenda Debose, vice president of the Pike County NAACP, presented Batie with a certificate of appreciation for his dedication as a member of the NAACP and a Fighter of Injustice.

“Through his courageous spirit and God’s blessings, Moses was elevated to the position of public servant,” Debose said. “In 1984, he along with Jerry Henderson were the first African Americans elected to the position of Pike County Commissioner. We celebrate Moses Batie and his accomplishments on his 100th birthday.”

One by one, family members and friends congratulated Batie on a long and meaningful life.

“Right about now, you should be enjoying the fruits of your labor relaxing on the beach in the Bahamas,” one friend told Batie, who responded that he was right where he wanted to be. “This is it!”

M. Sue Elliard’s wish for Batie was that the Good Lord be with him on every corner he turns. “May He wrap you in His arms and may you be forever young,” she said. “Happy 100th Birthday!”