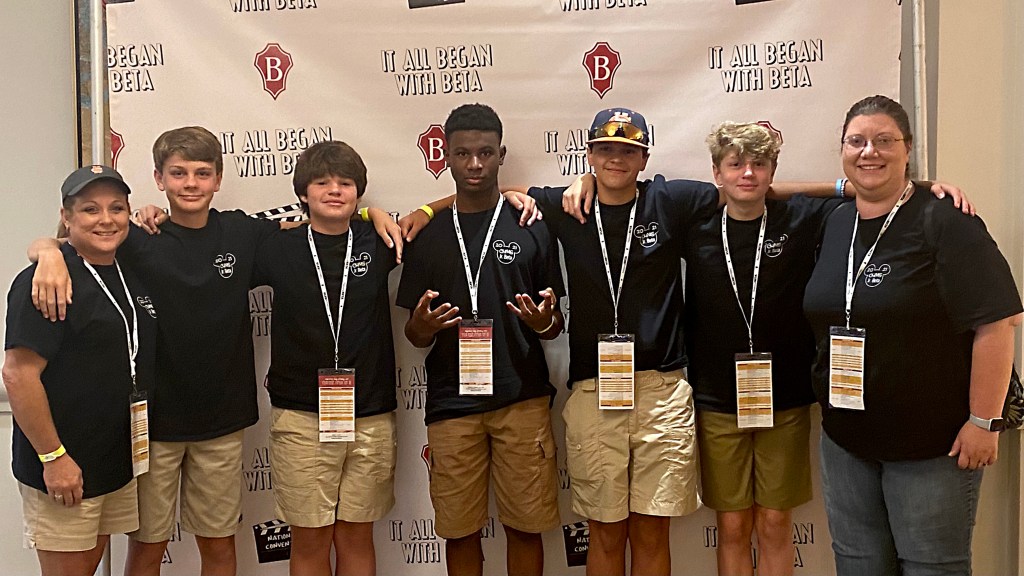 Pop quiz time. Choose one of the following.

b.)    Be an outstanding student

A number of Charles Henderson Middle School students have chosen “d” and five of that group spent part of their summer representing Troy in the annual Quiz Bowl competition at the Junior Beta Club national convention in Orlando.

In a challenging 2020-21 school year defined by the fight against the COVID-19 pandemic, the traditional Quiz Bowl format – which typically includes in-person, face-to-face completion – had to be adjusted. All non-essential travel was kept to a minimum.

“This year we took a written test virtually,” CHMS science teacher and Junior Beta Club co-sponsor Karen Kerfoot said. “I think it was a timed, 45-question test back in February. It covered social studies, science, math, grammar, just a wide range of things.”

When the compiled results came back the results were eye-popping.

“We found out we won the state,” Junior Beta Club co-sponsor Mandy Nolin said. “Then you go on to the next round. You have to finish top five and we were fourth on the written test.”

Those results, which were released in early June, qualified the team for a spot in the national competition – which presented a great opportunity but a big problem, too.

“We weren’t planning on attending Beta Conference this year,” Nolin said. “We would have had to raise quite a bit of money and with COVID we just decided not to make the trip.”

The team’s performance changed that.

“With the help of our school system, the help of our parents and a lady that helped coordinate everything, we worked to put together a good trip really quickly,” Kerfoot said.

Heather Templin, Wes’ mom, appreciated the teamwork it took to get the boys to Orlando.

“Our sponsors are very active and working very hard. With the excitement of the team’s success the school system jumped on it and was very supportive and made just an extra effort to make sure the boys got down there to participate and experience it,” she said.

“The competition was at a Disney World hotel, but we stayed more in the Universal area. The National Beta Club as a whole sponsored all the people involved for a night at Universal. It was a trip to remember.”

The team finished eighth in the country, adding to a season that included a state championship. Just as noteworthy as their performance, the boys represented themselves and their school very well.

“It was a good group of guys. They’re good friends, they get along well. I know one of mine was one of them, but honestly each of those guys that went down there was just really well-mannered,” Heather Templin said.

The five participants – Frigge, Lowery, Johnson, Templin and Branson, who was the alternate – aren’t just good students. They are all multi-sport athletes who didn’t mind shattering some stereotypes with their performance. Forget the “dumb jocks” or “nerdy brainiacs” labels.

In fact, Templin said their athletic background probably helped the team in the Quiz Bowl format.

“I think with our competitive backgrounds playing sports I think it definitely helped us,” Templin said. “If a guy knew the answer, he jumped on the question before the other team did. We were a little bit nervous, but at the same time we partly knew what we were doing.”

He said there was a bit of strategy involved among his teammates.

“Most of us had our subjects that we were better at, but if somebody knew it we would just answer it ourselves,” Templin said.

In general, Lowery was strongest in history or geography. Templin’s specialty was math. Johnson was strong in sports questions and Frigge had strengths in grammar and language arts categories.

Kerfoot sees the benefit of the boys’ athletic background to their performance in the classroom.

“I think it gives a drive, definitely. They are driven. They don’t just sit there,” she said. “They are all honor roll kids. They have to be. To be in Junior Beta Club you need 3.5 GPA or higher, plus complete community service every month.”

The benefits work both ways, too. CHMS football coach Fred Burden said all of the boys are hard workers.

“It does make a big difference when you have a lot of smart guys on your team. It helps us to learn our plays and be able to execute like we should,” Burden said. “Those kids that are on that Quiz Bowl, they are they are some of the leaders on our football team. It’s a pleasure working with them.”

Johnson and Lowery were eighth graders last year and have moved on to the high school. Templin, Frigge and Branson are rising eighth graders and have another year at CHMS.

Kerfoot and Nolin expressed pride in all the Junior Beta Club students who participated virtually in the state convention. Demondre Dubose was the state champion in 8th grade social studies.

From the 2019-20 school year, which ended prematurely due to the COVID outbreak, Ansley Watkins finished 9th nationally for Digital Arts and the CHMS Robotics teams was 3rd in the state.

These outstanding results helped solidify one thing: “We will be attending the State Convention in the 21-22 school year in Birmingham and then on to Nationals in Nashville,” Kerfoot said. “We are very proud of our Junior Beta Club.  We not only compete in the various competitions, but we do community service also. This year we will be selling yard signs to help raise money for nationals.”

The theme for the 2021-22 Beta Conventions and the school year is Beta Together.

“We want to extend the theme to our community, helping Troy to be Beta Together, too,” Kerfoot said. “We look forward to asking the local community to come together in support of all Trojans with a community yard sign fundraiser, showing that truly, “We are Trojans!”