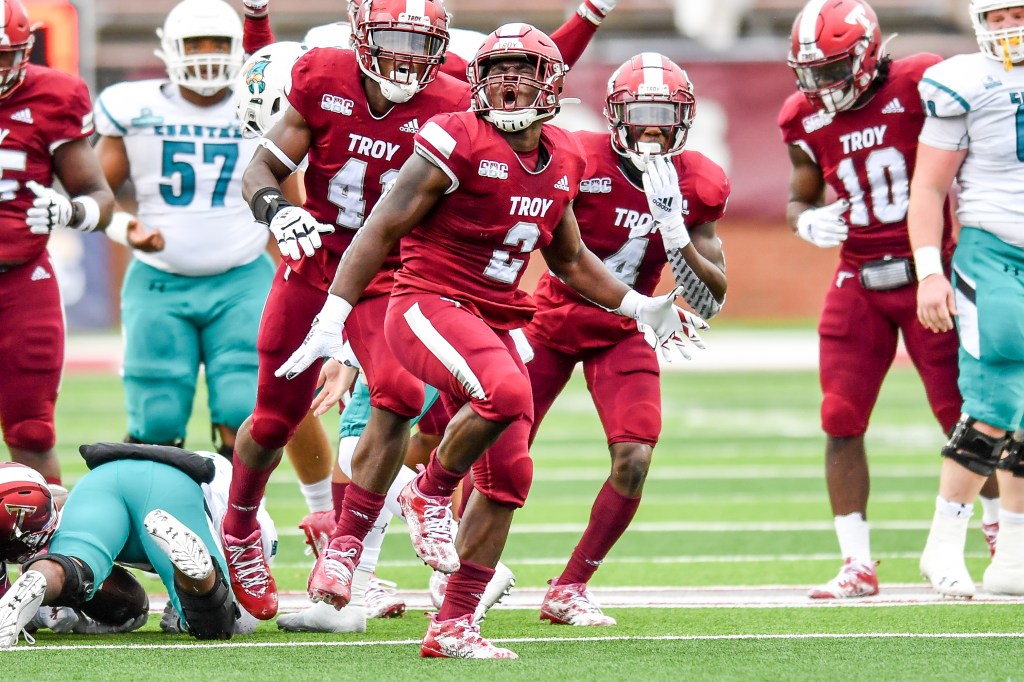 One day after earning a slot on the Butkus Award Watch List, Troy’s All-American linebacker Carlton Martial has been selected to the Bronko Nagurski Watch List, the Football Writers Association of America announced Tuesday. The award is presented annually to the nation’s top defensive player.

A preseason All-American for the second straight season, Martial most recently was named the No. 41 player in the country by Pro Football Focus after he led the nation in tackles last season and his combined total for the 2019 and 2020 seasons are also first nationally.

A native of Mobile, Ala., Martial, who checks in at 5-foot-9, recorded 113 tackles in 2020 and has 239 tackles since the start of the 2019 season. He finished 2020 with 10.0 tackles for loss and was one of just nine players nationally to rank in the top 50 in both tackles and tackles for loss following the regular season. Martial broke up a trio of passes and intercepted Coastal Carolina’s Grayson McCall (one of just two on the year) to set up a late go-ahead score for the Trojans in the season finale.

In 2019, he was named to the PFF All-America Second Team and became just the 12th player and first underclassman in the last 20 years at the FBS level to finish a season with at least 100 tackles, 15 tackles for loss and three interceptions. He closed the year with 126 tackles, the most by a Troy player since 2000, and 18.5 tackles for loss, the fifth most in a season in Troy history, and three picks. Martial was the only player in the country to rank in the top eight nationally in tackles (10.5) and tackles for loss per game (1.54).

Martial has twice been named to the All-Sun Belt First Team and was a semifinalist for the Burlsworth Trophy in 2020, which is presented to the nation’s top player who began his career as a walk-on.