The walls come tumbling down … 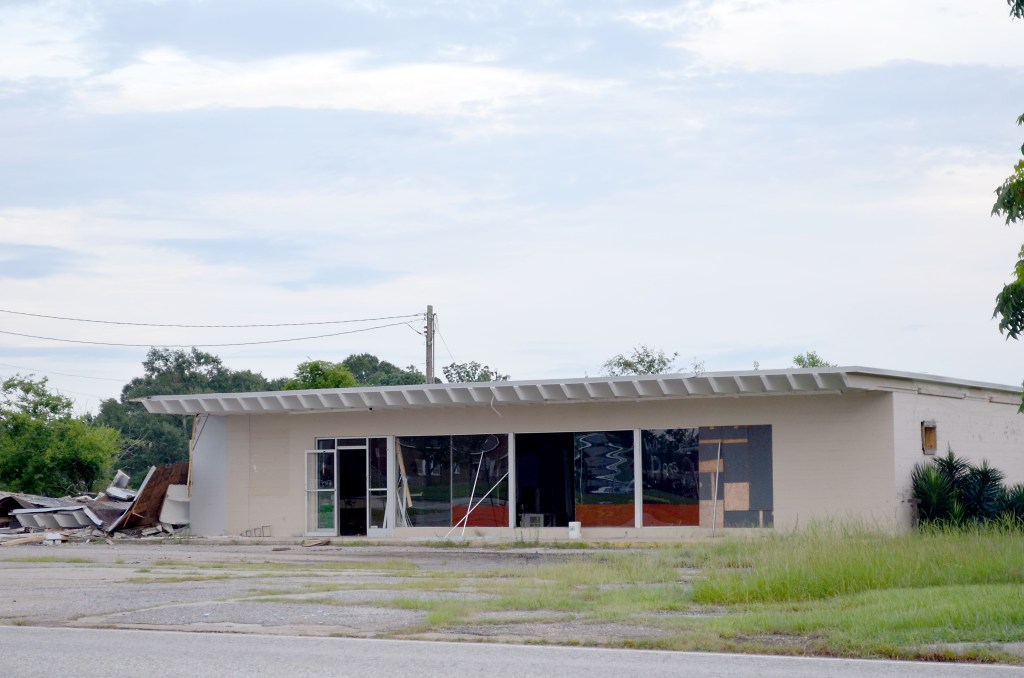 Jaine Treadwell | The Messenger The former Jr. Foods Store kept the streets of Brundidge from rolling up at sunset. The store was a 7-11 market and at the time stayed open 24-7 much to the delight of the townspeople.

The former Sheffield Service Station and the Jr. Food Store on South Main Street in Brundidge are now only memories for those who frequented both back during the 1970s and going forward, but not too forward.

It has been a long time since either building has been used for its original purpose.

The Shell Service Station was first owned and operated by Colon Sheffield. He moved to Brundidge with his wife and five daughters around the late 1950s.

The Sheffield (Shell) Service Station was a full-service “gas station.” Customers stayed behind the wheel while an attendant pumped the gas at around 31 cents a gallon, washed the windshield and checked the oil and water.

Customers who needed an oil change, tires changed or rotated or work done “under the hood” had only to pull into one of the two bays, sit on an out-front lawn chair and enjoy a bag of salted peanut in a bottle of “co-cola” during the wait.

Elise Floyd of Troy, one of the Sheffield girls, remembers helping out her dad by collecting money from the customers and running errands when she was old enough to drive.

She said the Shell Station provide work opportunities for men around town. Among them were Clarence McCray, Johnny Reynolds and Punch Moultry.

Floyd said the “filling station” was a busy place for customers and a gathering place for men in the community as was the Jr. Food Store that located on the South Main Street scene some time later.

The 7-11 market brought nightlife to Brundidge. In the early 1960s, most stores closed their doors at sunset. Having a store open until “late” night was new and exciting. The Jr. Foods, as it was called, became a gathering place for the community and for the purchase of snack items and a grab-and-go place for groceries.

Before and after football, basketball and baseball games at Pike County High School, the Jr. Store was a busy place.

In the summer, kids and adults alike stocked up on snacks when the Little League teams were playing.  The Jr. Foods was the concession stand for spectators and for little boys to enjoy the dugouts.

The Junior Foods Store was also a “canteen” of sorts for the teenagers in town.

“We went to the Jr. Foods to get things to eat and to drink during the summer and after school, too,” Michelle said. “The Jr. Foods had video games and we would ride or walk down there to play. They had pinball machines, too.”

Bundy said the video games were popular with the boys and the girls.

“We spent a lot of quarters playing Donkey Kong, Pac Man and all the other popular video games,” she said. “The Jr. Foods Store was a fun place for young people to go back then. It was what we did for entertainment.”

The new Pike County High School Athletic Complex will bring the community together in a different way from the Shell station and the Jr. Foods but the memories of those iconic businesses will linger as reminders of the good ol’ days on South Main Street in Brundidge.