For the love of the game …and the man, or godfather 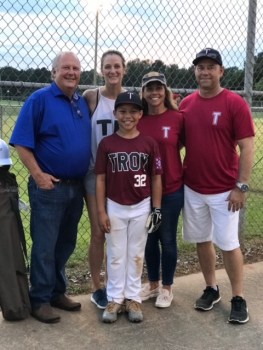 A younger Garrett Whitaker is pictured with his parents, Shondra and Steve Whitaker, right, and his godparents, Mike and Cathy “Cat” Lott. 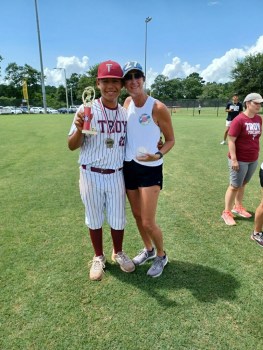 When Garrett Whitaker (above) blasted his 27th homer in the Dixie Youth Baseball Ozone State Tournament on July 13, he immediately presented the ball to his godmother, Cathy “Cat” Lott, in memory and honor of his godfather, Mike Lott.

The day was July 13, 2021. The place was a hot, grassy baseball field in Andalusia, Alabama. The Troy Americans had just won the Dixie Youth Baseball Ozone State Tournament in dramatic fashion and secured a berth in the Ozone World Series in Laurel, Mississippi.

Garrett Whitaker of the Troy Americans had hit a two-run homer in the 4-2 win over AUM. With the Trojans clinging to a 4-2 lead, Garrett had been called in to pitch the last inning of the state championship game. With two outs, the bases loaded and the count full, the game hung in the balance of Garrett’s next pitch. The fans on both sides held their collective breaths. Garrett struck the batter out with a sizzling fastball and the Troy fans went wild.

As the Troy Americans stood victorious on the field during the closing ceremony, Garrett’s name was called and he was presented his home-run ball.

Garrett accepted the ball, walked over and presented the ball to his godmother, Cathy Lott. Then, he returned to join his teammates, the Alabama Ozone State Champions.

The homerun that Garrett hit in the championship game was the 27th of the 12-year-old’s baseball career. The number 27 was significant in that it was the number that his godfather, the late Mike Lott, wore during his pitching career at Troy University. At Garrett’s request, he wears number 27 in honor and remembrance of his godfather.

Garrett said, he knew, if and when, he hit homerun 27, he wanted to give the ball to his godmother in remembrance of and love for his god-father.

“It was a very special moment,” ‘Cat’ said. “In all that excitement for Garrett to think of Mike. I couldn’t stop crying.”

Almost from the time, Garrett was born, he and Mike Lott bonded. Their relationship was special from the first time they were together.

Cathy and Garrett’s mom, Shondra Whitaker, had been close friends for years so Cathy was the natural choice as Garrett’s godmother.

“When Mike and I married, he became Garrett’s godfather,” Cathy said. “I could not imagine that a man and a child, who are not blood re-lated, could be closer than Mike and Garrett.”

Cathy said, as a very little boy, Garrett would chase her out of bed so he and Mike could sneak in sweet treats, sometimes even popsicles.”

“Mike was a great storyteller,” Cathy said. “He would tell Garrett funny stories that Garrett liked so much. We thought Mike made up all those stories but we learned later, from his friends, they were actually true. Mike and Garrett loved being together from the time Garrett was a baby.”

Garrett’s memory is filled with the times he and Mike Lott spent together, goofing around, arm wrestling and, of course, throwing and pitching balls. As he got older, Garrett said he spent a lot of time with his godfather at Troy University baseball games. Mike had been a pitcher for the Troy Trojans and a team leader. He instilled Trojan pride in his young buddy.

Even before Garrett was old enough to play recreation ball, his godfather was tossing balls around with him and hitting flies, hops and skinners to him, giving him batting tips and, of course, the how-to’s of pitching.

Shondra Whitaker said Garrett loved Mike Lott and Lott was a very positive influence in his life, and not just in baseball, but in all aspects of life.

Garrett said he wears the number ‘27’ in memory of and love for his godfather.

Mike Lott died on September 26, 2019. Cathy gave Garrett his godfather’s framed number 27 jersey that he wore at Troy State University. She wanted Garrett to have the jersey to hang on his wall.

“I miss Mike every day,” Garrett said. “I want him to be proud of me and what I do. Every day when I wake up and look up and see Mike’s Number 27 jersey, I’m reminded that I had the best godfather in the world.”

Garrett Whitaker will wear jersey number 27 in the Ozone World Series beginning August 6, in Laurel, Mississippi. He knows that his godfather will be proud of him, win or lose. Either way he will respond with dignity.