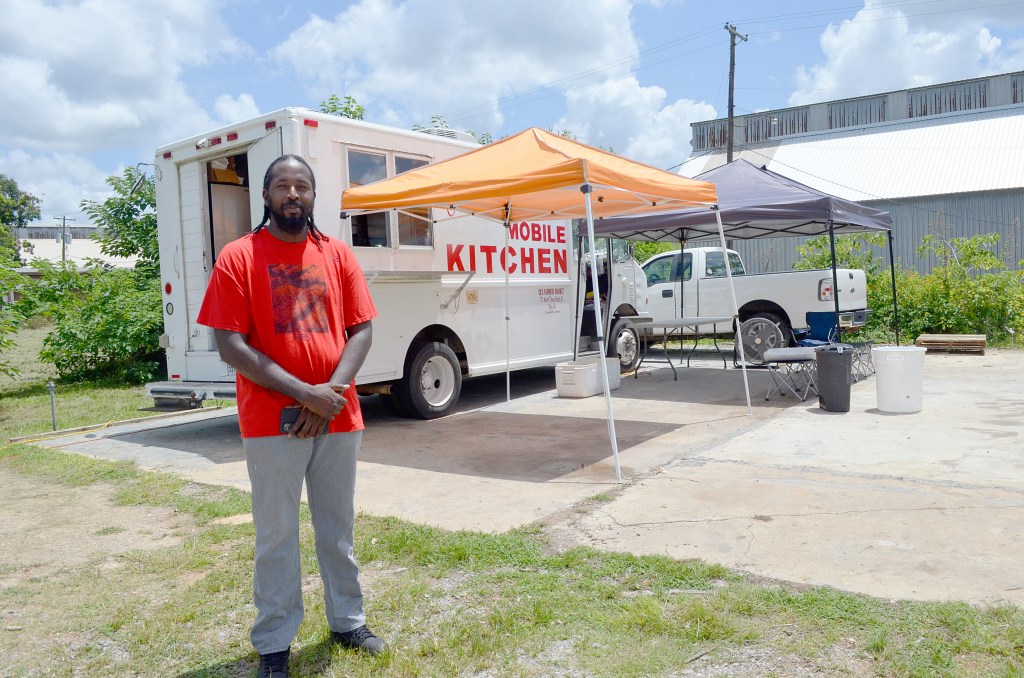 If you can’t stand the heat, get out of the kitchen.

As hot as it was on Friday, Jermaine Johnson was as cool as the center seed of a cucumber.

“We don’t buy the pickles we fry; we make our own pickles,” Johnson said has he dumped a “frying” of fresh, hand-cut cucumber pickles into a wire basket and then over into the hot fryer. “Our fried green tomatoes, our fried onions and our fried potatoes are hand-cut, too. The fried okra is the only thing we don’t hand-cut.”

The time was noon and already customers were arriving at OT’s Country BBQ Mobile Kitchen located in back of CB’s Farmers Market on North Three Notch Street in Troy.

“I cook to order,” Johnson said, as he battered catfish. “People don’t want to be handed a cold plate of food and they don’t want any soggy fried food. If several people are together, I want to get their food out so they can eat together. “

Many of Johnson’s orders are take-outs and some customers take their orders only as far out as their cars.

“They just sit right out in their cars and eat,” Johnson said, laughing.

Johnson’s mobile kitchen has been at the North Three Notch location for about a year. He moved when the downtown location where he was located sold.

“I’m happy out here,” he said. “We’ve got the Farmers Market out front so if I need anything, I just go out to the market and get it—onions, sweet potatoes, green tomatoes, collards, just whatever.”

Johnson said his menu is basically a meat and two or three at lunch. It’s the kind of food that sticks to the ribs and will carry over until suppertime.

His Friday menu includes his famous fried vegetables and most always collards.

“Our customers like collards,” he said. “They like turnips, too. But collards are the most ordered vegetable. There have been times when my mama has helped me wash, by hand, 300 bundles of collards just to get by.”

On Saturdays, the menu includes his famous barbecue and baked beans.

“Both days, it’s just me in here cooking,” he said. “My daughter helps by taking orders and she knows how to work it so that we get people’s orders out in time and together if they need to be. We don’t want to have one person having to wait on the other’s food to get ready. That’s not good business.”

“Cooking is heredity,” he said. “I inherited my love of cooking from my mama, Betty Jordan.  She runs the Farmers Market. She is one of the best cooks anywhere around. She ‘puts up’ a lot of the fruits and vegetables I use out here. And, collards. Nobody can cook collards like my mama. The best food in the world is food that’s home cooked or home-made. Out here, at the Farmer’s Market and OT’s Mobile Kitchen, we’ve got both.”

The Mobile Kitchen is open from noon until 8:30 p.m. on Fridays and Saturdays. During the week, Johnson is on the road “grocery shopping” for the fresh fruits, vegetables and fish for the week.

“Cooking is the easy part’ it’s the cleanup that gets me,” Johnson said. “Nine hours of cooking and cleaning up, are tough on my feet. Some Friday nights, I go home and rub my red, swollen feet. Other times, I just sit there. I can’t do anything but just sit. But, come Saturday morning, I get up and do it all over again.”

Johnson said, if, two years ago, someone had told him that he would be cooking in a mobile truck for a living, he would have said they were crazy.”

“But there’s no substitute for work and I enjoy it,” he said. “People are good to come eat with us and as long as they keep coming, I’ll keep cooking.”