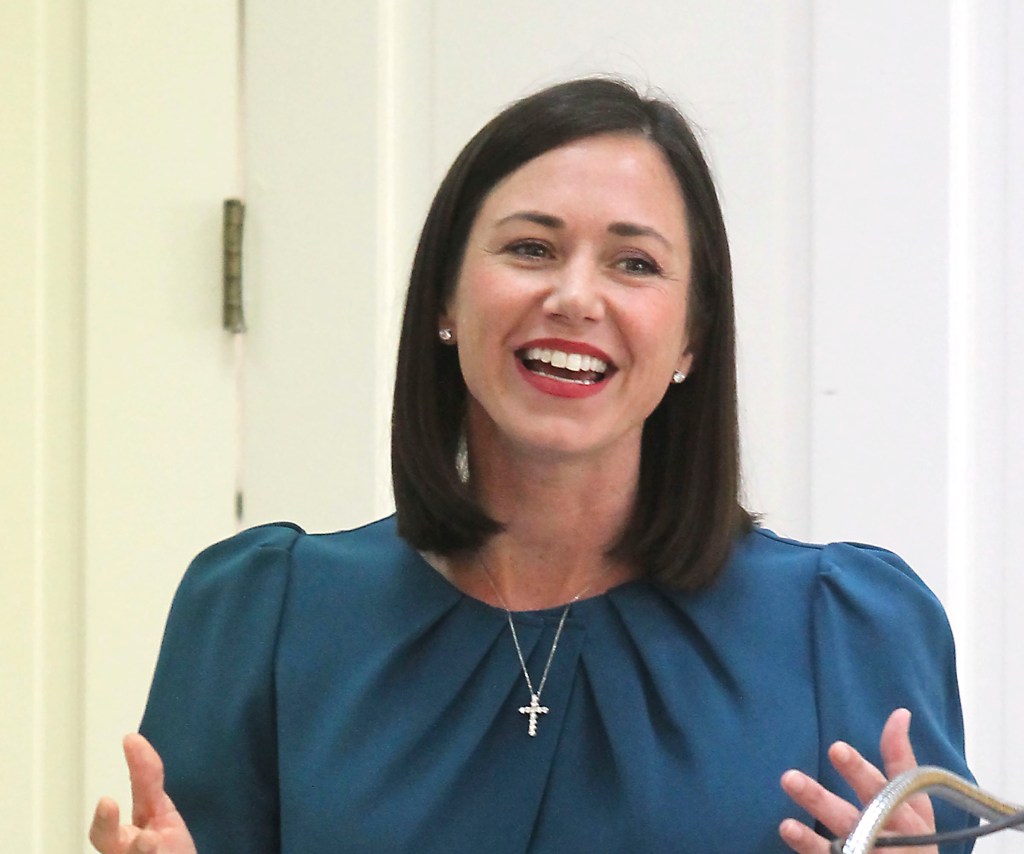 Huck Treadwell | The Messenger Katie Britt, candidate for the U.S. Senate, spoke to the Troy Rotary Club on Tuesday.

A little more than a month after launching her campaign for the U.S. Senate seat being vacated by Sen. Richard Shelby, Katie Boyd Britt told the Troy Rotary Club her campaign is gaining momentum.

Britt served as Shelby’s press secretary and managed his campaign in 2015, and in 2016, Shelby named her as his chief of staff. In 2018, Britt left Shelby’s office to serve as the Business Council of Alabama president and CEO. She announced she was seeking the Republican nomination for her former boss’ seat on June 8.

“Running for office is not something you can’t plan for,” Britt told Troy Rotarians. “Running for U.S. Senator on any given day is a tall order, especially in this political climate.”

Britt said she talked about the possibility of running for Senate with her husband, Wesley Britt, a 6-foot, 8-inch former University of Alabama offensive tackle that was drafted by the San Diego Chargers in the 2005 NFL Draft and went on to play for the New England Patriots. She said they prayed about it and talked with their children, Bennett and Ridgeway.

“It was our children that convinced me to run,” Britt said. “My son said he wanted to talk with me privately and gave me a list of reasons of how and why to run my campaign. My daughter said she wanted me to do this. She told me ‘God will walk with you.’”

Britt grew up in Enterprise and is the daughter of two small business owners, Julian Boyd and Debra Boyd. She graduated from the University of Alabama and also holds a law degree and doctorate from Alabama. Britt said her experiences growing up as well as serving under Shelby in Washington, D.C., and as the leader of the BCA, had helped prepare her for her campaign for the U.S. Senate.

“Living next door to Fort Rucker, I saw the sacrifices of the service people and their families,” Britt said. “As [Shelby’s] chief of staff, I had a front row seat to see the challenges and opportunities for the state. As president of the BCA, I had to bring people together to improve the state. And from may parents, I know what small business owners can do if the government gets out of the way.”

When Britt announced her campaign, she created a three-way GOP standoff for the U.S. Senate with U.S. Rep. Mo Brooks and former U.S. Ambassador Lynda Blanchard.

After announcing her candidacy on June 8, Britt had just three weeks of fundraising left in the second quarter before the June 30 deadline. Britt and her campaign were able to raise $2.24 million over the three-week span, giving her campaign a lot of momentum early in the race.

The news of Britt’s fundraising gained the attention of former President Donald Trump, a supporter of Brooks.

Trump released a statement stating, “I see that the RINO Senator from Alabama, close friend of Old Crow Mitch McConnell, Richard Shelby, is pushing hard to have his “assistant” fight the great Mo Brooks for his Senate seat. She is not in any way qualified and is certainly not what our country needs. For Mitch McConnell to be wasting money on her campaign is absolutely outrageous. Vote for Mo Brooks!”

Brooks posted on his Facebook page, “We’re being outraised 3:1 by a DC puppet.”

After speaking to Rotarians, Britt said she wanted to diffuse the rhetoric coming from her opponent by focusing on her campaign and getting her message out.

“It’s really unfortunate,” she said. “My opponent has been on the ballot for 40 years and he has chosen to perpetuate falsehoods about me. That shows two things. One, he has no accomplishments to stand on. And, two, he knows our campaign is gaining momentum, and people are excited to see something new.”

Britt said she planned to take a grassroots approach to her campaign, by getting out and meeting people face-to-face.

“I want people to know I’m the right leader at the right time,” Britt said. “I want to identify the problems and be the kind of leader that works with people to create solutions. We raised $2.24 million in three weeks and 94 percent of that money came from Alabama. People are excited about our campaign. I want to build on that momentum. I can’t wait to get out and meet people across the state.”