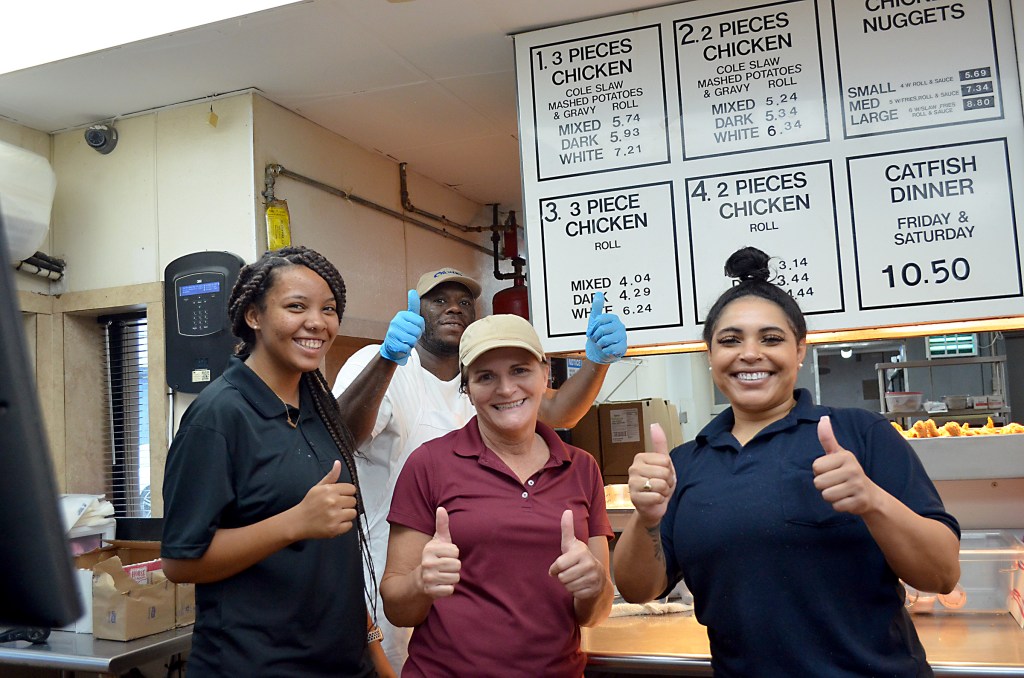 Jaine Treadwell | The Messenger Patsy Gibson, center, and the Crowe’s crew gives thumbs up to Crowe’s Chicken Tenders. Crowe’s in Brundidge is a finalist in the Bama’s Best Chicken Tenders Contest sponsored by the Alabama Farmers Federation’s Poultry Division. Contest judges will visit the four finalists this week and taste-test their chicken tenders.

Judges will visit the four finalist restaurants for Bama’s Best Chicken Tenders Contest this week. The contest is sponsored by the Alabama Farmers Federation’s Poultry Division.

Crowe’s Chicken in Brundidge will be the first of the four finalist restaurants visited.

“The judges will be here at 10:45 Wednesday morning and, for sure, I’m a little nervous,” said Patsy Gibson, owner of Crowe’s Chicken in Brundidge since February, 1999.

“But I started working as a cashier for Mr. Sherrill Crowe when I was 14 years old,” she said. “Nobody showed me anything about cooking chicken. I learned everything I know by watching. If you’ll watch the cook, you can learn.”

And, Patsy Gibson has learned well. Crowe’s Chicken tallied more than 1,600 votes in the initial Bama’ Best Chicken Tenders Contest. Every day, cars wind around and around Crowe’s Chicken drive-thru at lunch and suppertime to get a box of Crowe’s chicken “nuggets.”

If Patsy Gibson has any “best kept’ secrets about Crowe’s chicken tenders, she’s not saying.

“We just do what we’ve been doing for years, cooking the best chicken we can,” she said. “Being in the contest has been a good experience. Everybody has been excited for us. We’ve even gotten some balloons and chocolate candy.”

The balloons have deflated and the chocolate has all been eaten. Now, it’s show-time.

“The judges will be here Wednesday morning and they have told me not to do anything special,” Gibson said. “So, we’ll fry the chicken tenders the same way we’ve been doing it for 20 years and serve the tenders with the same sauce …. and hope that’s good enough.”

“But, we’re honored and excited to be among the finalists,” she said. “Win or not, we’ll keep doing what we’ve been doing and hope that people will keep coming. COVID-19 has been tough. We don’t have enough workers, so we close early on Sunday so we can get some rest. We’ve just taken it one day at a time. We could not have made it without our customers’ support. We are so thankful for them.”

The judges will also visit the Chicken Shack in Luverne around 12:30 on Wednesday. On Thursday, the judges will visit J’s Hole in the Wall in Bryant and Bobby’s Restaurant in Eva on Thursday. Judges are expected to spend one hour at each restaurant.

The winner will be announced by press release the week of July 19.