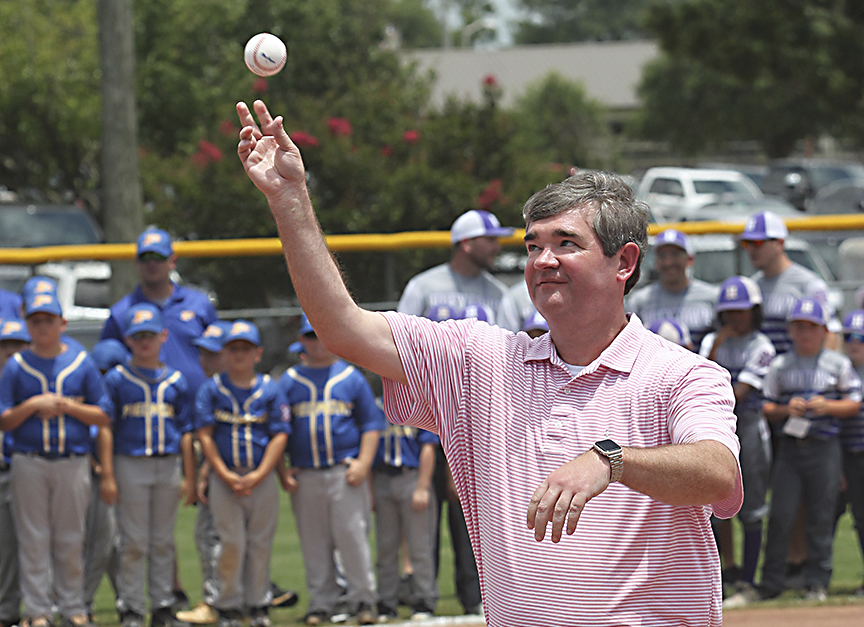 Troy Mayor Jason Reeves was on hand to toss out the celebratory first pitch and said the crowd may have been the biggest he had ever seen at the opening of a state tournament.

Reeves went on to ask the crowd to enjoy themselves while in Troy and hopefully come back in the future to visit Troy again.

But, Reeves also said the tournament was about a lot more than baseball.

“This can be huge for the economy,” Reeves said. “If you look at the number of people here, many of them will stay here, eat here and shop here. We have 25 teams in this tournament and parents, grandparents, relatives and brothers and sisters are coming to see them play.

“This tournament allows people to come see our community. It’s not just helping the economy when people stay and shop, it’s the exposure we’re getting from the tournament. The people visiting here will get to see more of our community and maybe learn something about us they didn’t know. It’s a wonderful opportunity for us to make an impression on people from all over the state.”

Dixie Youth State Director Charley Bell said hosting a tournament was a competitive process. He said Dixie Youth usually had three to four cities competing to host each tournament. He said facilities played an important role in the final decision of what city would win the tournament bid.

“[Troy Parks and Recreation Director] Dan Smith and his staff work extremely hard working with state and national organizations to host these tournaments,” Reeves said. “We try to host one of these tournaments every few years. Dan always has a needs list and a wish list for the recreation department, and every year we look at that list. We’re continually trying to do things to improve our parks and our services.”

Smith said this tournament would have a tremendous impact on the economy.

“For a tournament of this size, and I’m basing my estimate on a super regional we hosted a few years ago will be about $200,000 for 25 teams. This is one of the largest tournaments I can remember. I know the hotels, restaurants and store in the area will benefit from the influx of so many people.”

Bell said one of the reasons the bidding for tournaments is so competitive is because of the economic impact.

Smith’s estimate was for the direct impact for the tournament.

But, Bell said the tournaments also have an indirect impact on the economy as well. He said the money spent during the tournament will stay in the community, and long-term the impact for a tournament this size could multiply out to about $1.5 million.