Kids get edZOOcated: Children learn a lot from Animal Tales 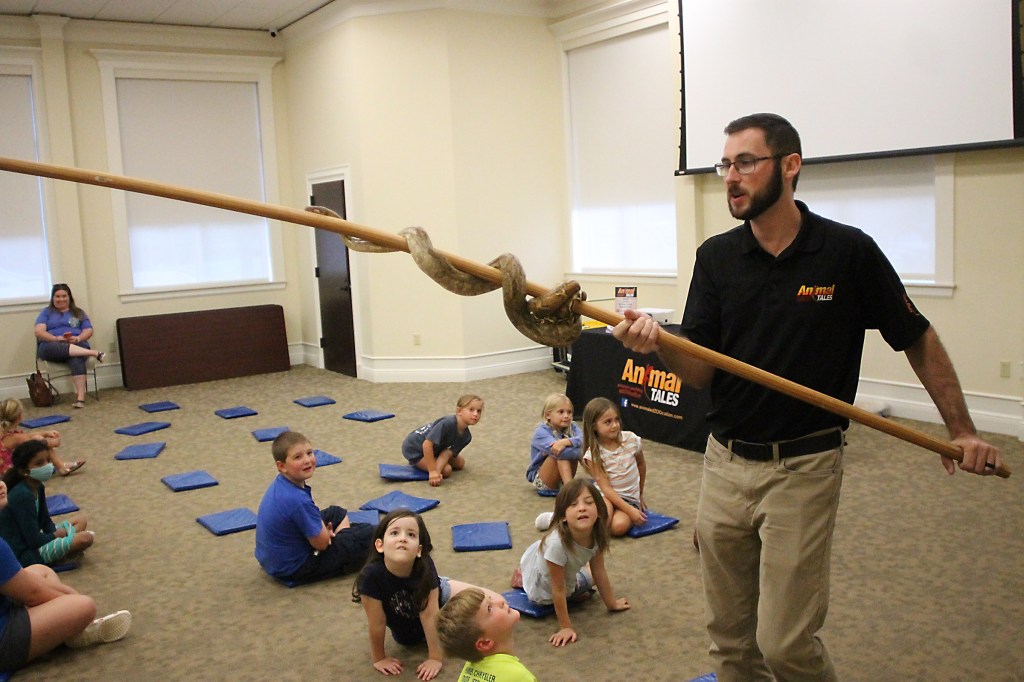 Huck Treadwell | The Messenger John Ham, southeast director of Animal Tales, shows children at the Troy Public Library’s Tails and Tales Summer Reading Program a Hog Island boa constrictor. Ham showed the children a variety of animals and discussed where they came from and told the kids some interesting facts about each animal.

Children got to learn a few things about a creepy scorpion, a jumping rodent and a grape-eating bird at the Troy Public Library’s Tails and Tales Summer Reading Program.

John Ham, the southeast director of Animal Tales, brought quite a few interesting critters to the library to bring some oohs and aahs to the children attending the Tuesday afternoon program as well as educate the kids on a few facts about the animals.

Ham brought Bobo, an emperor scorpion, which originates in Africa. Most of the children decided to keep a good distance from the scorpion until Ham shined a black light on it and the bug glowed in the dark, then they inched a little closer for a better look.

Ham also brought a long-tailed chinchilla from South America, a giant African bullfrog, a Von der Decken’s hornbill from east Africa and a black and white tegu from Argentina.

Ham told the children that tegus had been outlawed as pets in many states, including Florida, because they grow to about three feet in length. He said pet owners would let them go and they could easily survive in the Florida climate. He said because tegus were omnivores, they ate everything from alligator and bird eggs to vegetables in the garden. He said they had become quite the pests in Florida.

For the grand finale, Ham brought out what the children had been anticipating the whole program … a snake. He brought a Hog Island boa constrictor. Ham said the boas were quite common as pets in the United States. The boas come from two small islands, the Hog Islands, in Honduras. So many were taken from the islands in the 1980s and 1990s to be sold as pets, the species almost became extinct in the wild. But, Ham said they are plentiful as pets because breeding programs had been introduced in the United States.

Summer Readers competing in the Top Reader Program must maintain a reading log with each book title and number of pages read. All reading logs must be turned in by 4:45 p.m. on July 13.

There will be first, second and third place prizes awarded to the 4- and 6-year-old age group, and first and second prizes will be awarded by age group for children 6-11 years old.

A Top Reader Party will be awarded according to the total number of books read.

There will be first, second and third place prizes awarded to the Young Adult age group.

Prizes and invitations to the Top Reader Party will be awarded according to total number of books read. Books read must be level appropriate.