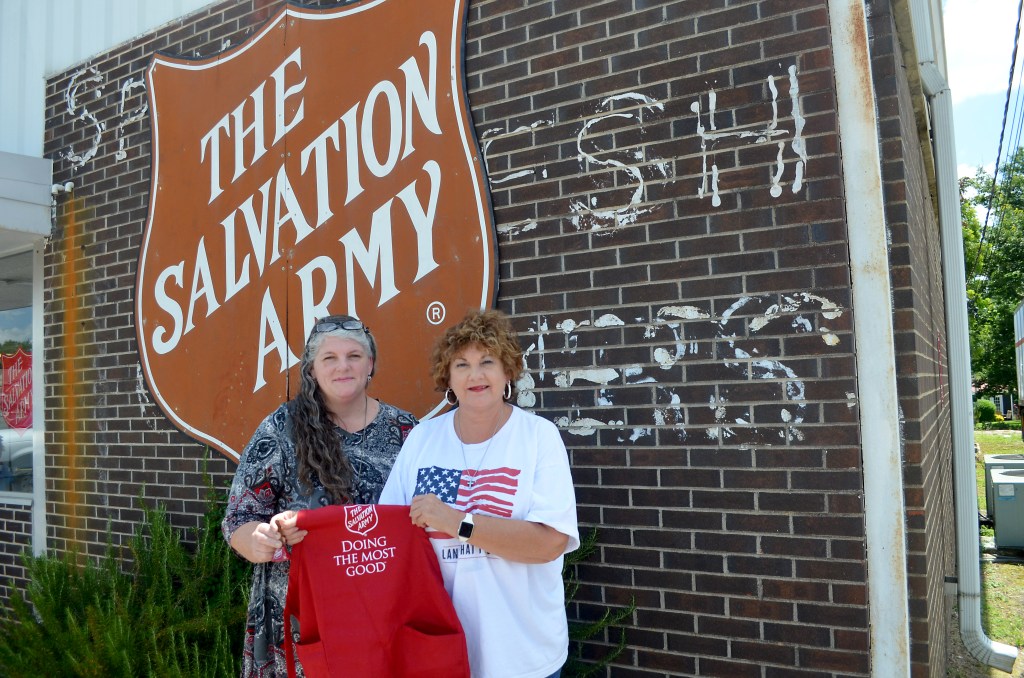 Jaine Treadwell | The Messenger Donna Kidd, left, is the newly appointed director of the Salvation Army Thrift Store in Troy. She replaces Kim May who retired as the director in June after 14 years. The “changing of the guard’ has gone smoothly, thanks to May’s leadership and the comradely of the employees and staff and the great customer base.

For Donna Kidd, the transition from employee at the Salvation Army Thrift Store in Troy to director has been relatively smooth.

“I had been working here since August and Kim May, director, had prepared me,” Kidd said. “I been accepted into the ‘family’ here so, thankfully, I didn’t panic.”

And, if Kidd had panicked, it would have been understandable.

She had been a stay-at-home-mom with four children and was a preacher’s wife so she was stepping into unchartered waters.

“Only one of our children was at home and the chance to work at the Salvation Army Thrift Store was a good opportunity,” Kidd said. “I wanted to give it a try.”

Kidd soon realized that her life as a mom and preacher’s wife had prepared her to serve others.

“As a preacher’s wife, I was aware of the struggles that people go through and of the hardships,” Kidd said. “I was aware of the needs people have so I was able to understand and handle those situations here better.”

Kidd said God definitely had a hand in hand in her employment with the Salvation Army.

From the beginning, Kidd said she was right at home at the Salvation Army Service Center on South Brundidge Street.

“Kim, the employees, everyone at the service center was so accepting of me,” Kidd said. I felt at home and among friends. They were like my church family. They were my little biddy work family.”

From August until May’s retirement in June, Kidd benefitted from May’s 14 years of leadership experience. She learned about the operation of the Thrift Store and the programs offered.  She rang the bell during the Red Kettle Campaign and learned about the Empty Bowls fundraiser and the camp stew sale. She enjoyed the employees and the friendships they shared. She settled in as an employee and she was happy doing just that.

However, when Kim May announced her intention to retire in June, she already had in mind who her replacement should be, Donna Kidd.

“I had seen what Donna could do and how well she worked with the employees and customers and they liked her,” May said. “She wanted to learn and she did thing rights. She understood the hardships that people were going through. And, her husband, like mine, was willing to help if and when needed.”

But, May told Kidd there would be rough roads and difficult times but she had the abilities and caring spirit to handle whatever came her way.

Now, a month into the directorship of the Salvation Army Service Center in Troy, Kidd said she knows that she made the right decision in accepting the director’s position.

“The employees and customers are wonderful and I can’t say enough about Donna Jones,” Kidd said. “She knows what I need to know and Kim has been so helpful through it all. I have her home phone and she will answer. No one knows more about the operation of the Salvation Army Thrift Store than Kim. The advisory board has been right here to help. I could not have asked for more.”

Kidd added with a smile,” but I do stay prayed up.”

May said she had no doubts that the Salvation Army was in good hands.

“I know the staff and their dedication,” she said. “And, our community never lets us down.”

May is taking some time off before going to work for Woodman Life. She was asked to stay on as a member of the Salvation Army Advisory Board and she agreed,

And, she’s just a close as a phone call. Her heart is, and always will be, with the Salvation Army for the good that it does.