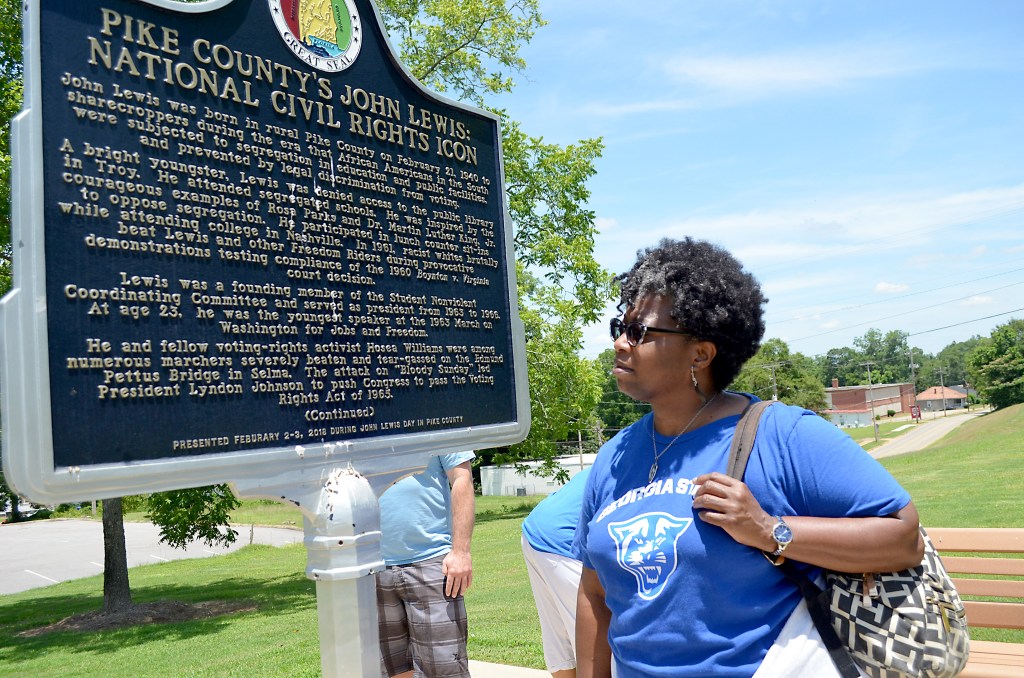 The City of Troy was a planned stop for a group of students and faculty members from Georgia State University Friday. The group was on a journey to learn more and to know more about the man Dr. Martin Luther King, Jr. called “the boy from Troy.”

John Robert Lewis was an American politician, statesman and civil rights activist and leader who served in the United States House of Representatives for Georgia’s 5th congressional district from 1987 until his death in 2020.

The group from Georgia State wanted to know more about Congressman Lewis who grew up in the red clay fields of Pike County and went on to be one of the “Big Six” leaders of the groups who organized the 1963 March on Washington and who lead the first of three Selma to Montgomery marches across Selma’s Edmund Pettus Bridge.

Gertrude Tinker Sachs, department chair, George State University Department of Middle and Secondary Education, said the group was made up of students and faculty members who wanted to know more about the man who, as a youngster, preached to the chickens, and, as a man, had a profound love for people and worked diligently for equal rights for all people.

“Our first stop was at the Legacy Museum in Montgomery,” Tinker Sachs said. “It was not an originally planned stop but the Troy Tourism Office suggested it. We were appreciative. It was very enlightening.”

The tour group, Tinker Sachs said, wanted to know more about Congressman John R. Lewis, who was born in Pike County and was educated at Bethel School in Banks and Pike County Training School in Brundidge.

The group’s first stop was at the Troy Public Library where they viewed the historical marker that honored Pike County’s John Lewis: National Civil Rights Icon.

“I’m in awe of the man,” a student said as she viewed the marker.

“I’m sure we all are,” said Larry Earl, curator for Project Crenshaw. “He has a profound love of people and that was evident in all that he said and did.”

The group’s second stop was at Troy University to have photographs taken at John Robert Lewis Hall. At the dedication ceremony, Troy University Chancellor Dr. Jack Hawkins, Jr. said it was the right thing to do to name the university’s centerpiece building “for a great man.”

Those words, “a great man,” were spoken many times by the group of students who came to “know more about John Lewis.”

The last stop on the Troy tour was at the Lewis’ home place in rural Pike County about five miles down the Gardener Bassett Road.

Rosie Tyner, Lewis’ sister, welcomed the group to the site of the old home place and spoke about her brother, John, and his love of humanity.

“John came from humble beginnings but he aspired to achieve to do more,” Tyner said. “And, he did more. He believed in democracy and the ideals of it.”

Tyner shared with the group her brother’s desire to reach out to others in search of equality for all.

She, laughingly, said that, yes, he did, as a youngster, preach to the chickens. Later, he inspired and motivated huge numbers of people to also achieve and do more.

And, there’s a chicken yard with a very productive brood even without a sermon being preached.

Before leaving, the group gathered in the shade and listened intently as Earl made a plea for human equality and expressed his desire for a way to be found for all to live free and equal.

“Every life matters,” he said and expressed the need for all people to treat others like they would like to be treated, to have love for each other like John Lewis’ family has for each other and others.

Tyner expressed, not as an after-thought but as an often-thought, her wish that the old home-place had been left as a lasting tribute to John R. Lewis and as a reminder of his desire for equality for all.