Carlton Joins the Half Century Club at TB&T 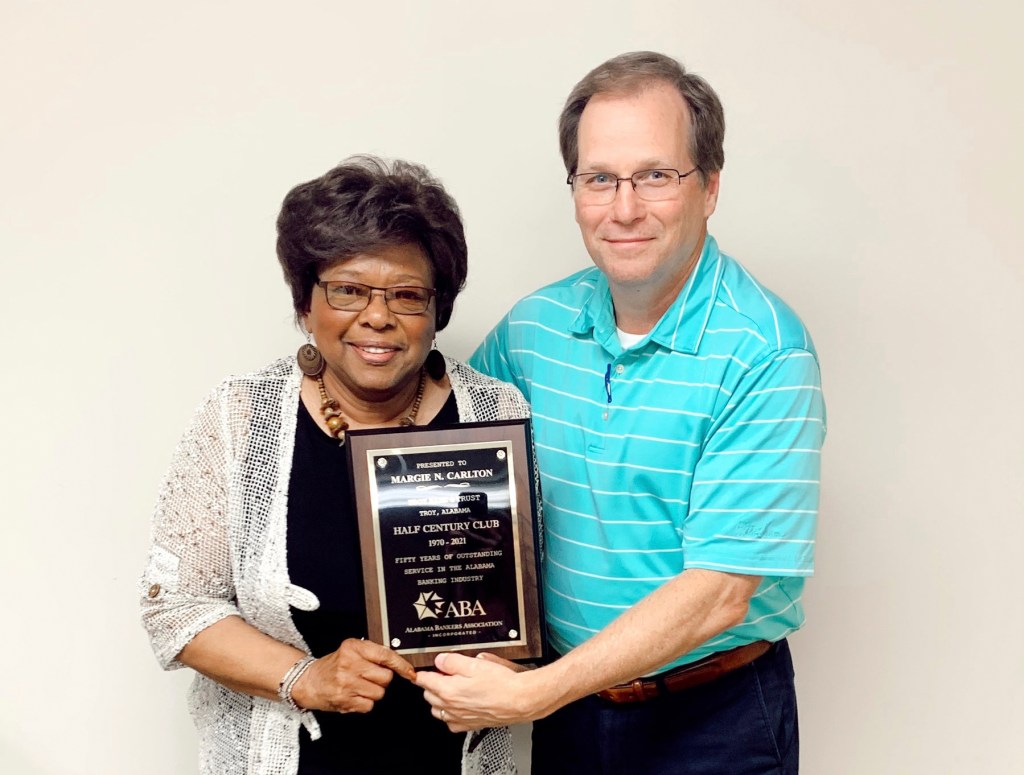 Submitted Photo Margie Carlton will retire this week after working at Troy Bank & Trust for 51 years. She is one of five TB&T employees with 50 or more years of service. She is pictured with Jeff Kervin, TB&T president and CEO.

For 51 years, Margie Carlton has gotten up every workday and gone to work at a bank.  After this week, she plans on sleeping in, then rocking in her new rocker and enjoying a cup of tea.  At least, the first day of her retirement she will rock and sip tea.

Margie joins five other Troy Bank & Trust employees who have membership in the “Half Century Club” sponsored by the Alabama Banking Association. She began her banking career in 1970.

When asked what has changed the most in banking, she quickly says it’s the technology.  “When I started, we used adding machines and pencils.  Now everything is done with computers,” said Carlton.  “Customers have changed too.  They know a lot more about banking now,” she said.

Margie has worked with many area bankers during her tenure in the field.  Jeff Kervin, President & CEO of Troy Bank & Trust, remembers meeting Margie for the first time.  “I met Margie when I started in banking in 1985, and she doesn’t look like she has aged at all,” he said.  “We go back a long time!”

“I think I will miss my coworkers and my customers the most,” said Carlton.  “But I will not miss getting up early!”

Troy Bank & Trust is an independent community bank headquartered in Troy, Alabama, with 14 locations in five Alabama counties.  With 115 years of service to the communities we serve, we try every day to truly be “the only bank you’ll ever need.”