It all adds up at Troy University math camp 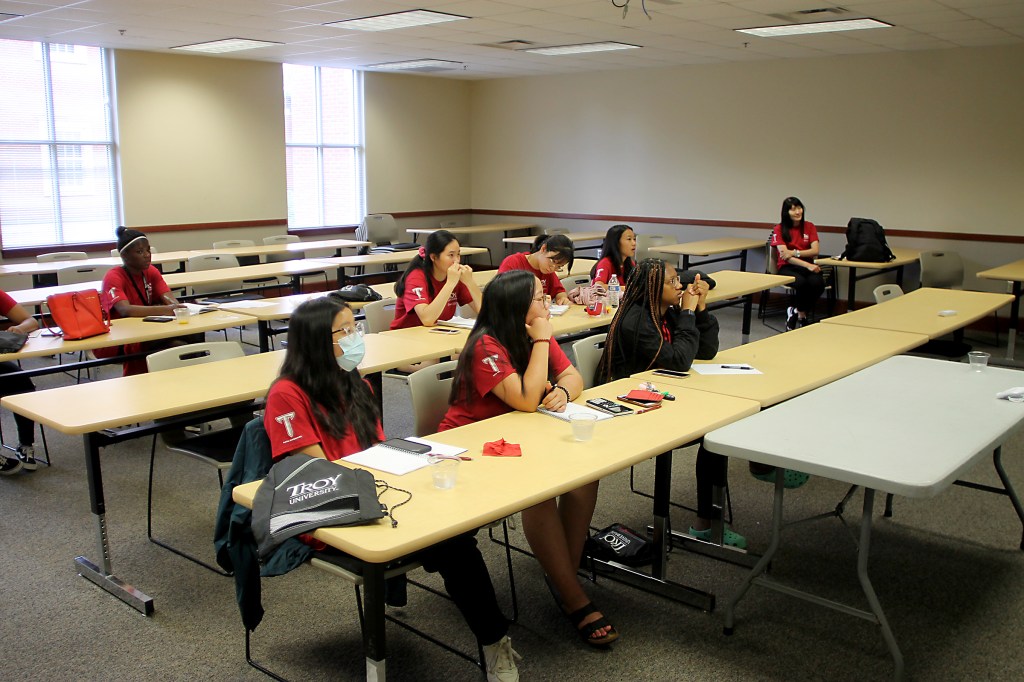 Huck Treadwell | The Messenger Students attending the Girls Get Math with Data camp at Troy University learn ways to approach math problems on the ACT test.

At the end of the day, it all adds up for students at Troy University’s first Girls Get Math with Data camp.

“This is an extension of a camp we have for seventh and eighth grade girls,” Dr. Ken Roblee, chairman of Troy University’s Math Department, said. “We do math and basketball camp, Mathsketball, which is a partnership with the athletic department. It teaches students about how statistics are used in the real world.

“Dr. Huijun Yi and I wrote a grant for the American Math Society for the camp. It’s for 10th and 12th grade girls. We want to encourage them to pursue a career in math and show them what career opportunities there are in math.”

Roblee said the Girls Get Math with Data camp exposes the students to the uses of math in real world applications that they may have never seen before.

He said girls at the camp heard form a speaker from the Alabama Department of Public Health who talked about how the department used statistics. He said the campers also visited the Troy University Athletics Department as well as the university’s Sports Information Department to learn about how statistics were used in athletics.

“We wanted to do a lots of ‘hands-on’ teaching by getting them in the computer lab and giving them an introduction to R,” Roblee said. “R is a statistical programming language that is being used in a lot of careers. We wanted to give them some exposure to that. We wanted to expose them to as much as possible to how math is used in everyday life.

“We try to introduce them to ideas they may not have seen in high school,” Roblee said. “[On Thursday] we did ACT prep sessions because math is a big part of the ACT. We’re showing them how to think through the problems.”

Roblee said he was pleased with the number of students that attended the camp in the first year. He said they plan to apply for a grant for the camp next year as well.

“We got a lot of experience with this camp and we learned a lot about how to recruit students to the camp,” Roblee said. “We plan to apply for the grant from the American Math Society again next year and we’re going to set a goal of 20 students. But, we hope to recruit more than that.”