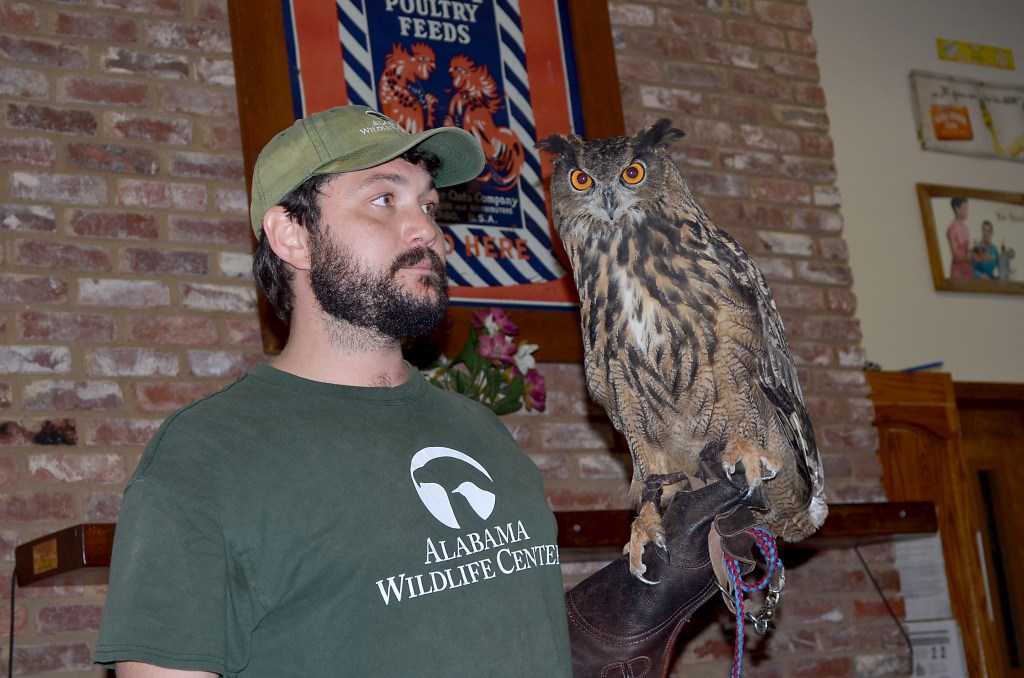 That exactly the program that “Tupper” had planned for the Brundidge library’s Summer Reading Program Thursday that features weekly Tails and Tales.

The Alabama Wildlife Center is a wildlife rehabilitation and education center located in Oak Mountain State Park in Pelham.

“It is the largest center of its kind in the state,” Arnold told the children. “At the wildlife center, we treat native birds from all across the state that have been injured or orphaned.”

In Alabama, there are more than 100 different species so the Alabama Wildlife Center has many opportunities to treat native birds.

Some of the birds that are brought to the center are not able to return to their natural habitat so they remain at the Alabama Wildlife Center.

“Birds are injured in a lot of different ways,” Arnold said. “They sometimes fly into windows and are hurt. Others are attacked by other birds – hawks, owls and falcons. Some birds are hit by vehicles and millions are injured in cat attacks. We also get many small birds at the center that have been separated from their mothers and daddies and cannot get food.”

Arnold brought with him three birds that are residents of the Alabama Wildlife Center. They have been injured in such a way they are not able to return to their natural habitat.

Arthur is a falcon that has a broken wing. Arnold said Arthur is fast and agile and is a daytime bird.

Rocket is a Red Shouldered Hawk that would naturally live near water. Princess is an Albino Turkey Vulture that, Arnold said, is nature’s garbage collector.

“The vultures feed on dead animals, live insects and decaying vegetable matter,” Arnold told the children. “Imagine what it would be like if we didn’t have these birds that collect that kind of garbage.”

Garneshia Lampley, Tupper’s children’s librarian, thanked Arnold for a very informative and entertaining program for the children and adults in attendance.