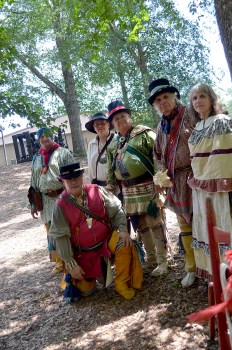 Thunder on the Three Notch will return to the Pioneer Museum of Alabama Saturday from 10 a.m. to 5 p.m. A re-enactment of the Battle of Hobdy’s Bridge will take place at 2 p.m., but re-enacrtors will demonstrate the daily life of both settlers and Indians (above) that lived in the area all day. 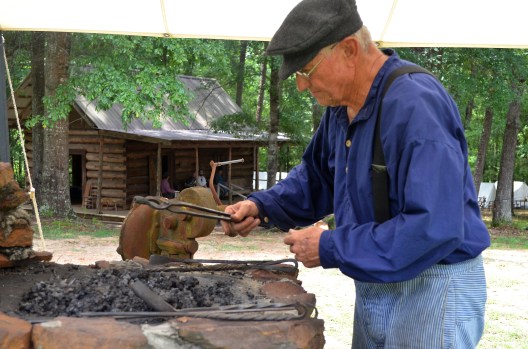 The Battle of Hobdy’s Bridge is familiar history to many members of the older generations of Pike County. For the younger generations, maybe not so.

But, this weekend at the Pioneer Museum of Alabama, history came alive in an interesting and rather personal way.

Bob McLendon, local historian and re-enactor, organized a re-enactment of the Creek War of 1836 titled Thunder on the Three Notch.

The Creek War of 1836 was fought along the fringes of the Three Notch Road that ran through the homeland of the Creek Indians and where the Battle of Hobdy’s Bridge was fought here in Pike County.  One belief is the wagon road was so named because the surveying crew cut sets of three notches in trees along the way to mark the route to follow.

In the eyes of the United States Government, the Creek War of 1836 had been over for months when one of its largest battles was fought on the Pea River at Hobdy’s Bridge.

On Friday, a host of re-enactors playing the roles of both the settlers along the Hobdy’s Bridge area and the Creek Indians, brought the Battle of Hobdy’s Bridge to life for a large gathering of interested spectators, including those from Georgia, Montana and Michigan, as well as across Alabama.

“We’re actually simulating the Battle at Hobdy’s Bridge,” McLendon said. “We couldn’t do a historical re-enactment because we don’t have the terrain here, so we’re commemorating the battle. It was the last battle fought in the Creek Indian War in Alabama.”

McClendon said two battles occurred at the site of Hobdy’s Bridge, the first in February 1837 and the second a month later in March.

“The battle happened during settlers’ expansion into Alabama,” McLendon said. “The Indians were being moved out to the west, to Oklahoma. These Indians were traveling south to join the Seminole tribe and were attacked at Hobdy’s Bridge. A large number of indians were killed, but most escaped and continued on to Florida.”

The Battle of Hobdy’s Bridge was a bloody one and many different accounts of the battle have been recorded.

An account by local historian John Phil McLaney pointed out that the land that had been promised to the Indians was being taken from them.

Emotions were running high on both sides at the Battle of Pea River,” McLaney said. About 250 settlers were involved but very few soldiers. They were led by Brigadier General William Wellborn. The Creek Indians were camped about a mile north of Hobdy’s Bridge. Wellborn sent part of his force up the east side of the river and he moved up the west side with his command.

The idea was to sandwich the Creek Indians and defeat them. The Pea River was at flood stage and the settlers had to wade in water knee deep to chest high to get to the fight. The battle was a fierce one that ended in hand-to-hand, Indian fashion fighting.

“The ‘soldiers’ were given only 24 cartridges and were told when those gave out to get ready to fight with Bowie knives. The fighting lasted for three hours and 52 minutes and it was constant. The last 45 minutes were hand-to-hand combat. When the battle was over, there was no more Creek Muskogee Nation, McLaney said.

The men who participate in Thunder on the Three Notch shared their thoughts on the Creek War of 1836. Ben Ferguson of Walton County, Florida and Dale Cox on Dothan said the Creek Indians were living on land they had been given and were living much as the settlers in the area. They lived in wood houses, raised cows and other animals, planted gardens and were living a peaceful kind of life when they were forced from their homes.

The women tended to household chores-cleaning, cooking and spinning. They played music and the children played yard games. Then came the Thunder on Three Notch.