Tupper’s kids go on cattle drive with the Brannens 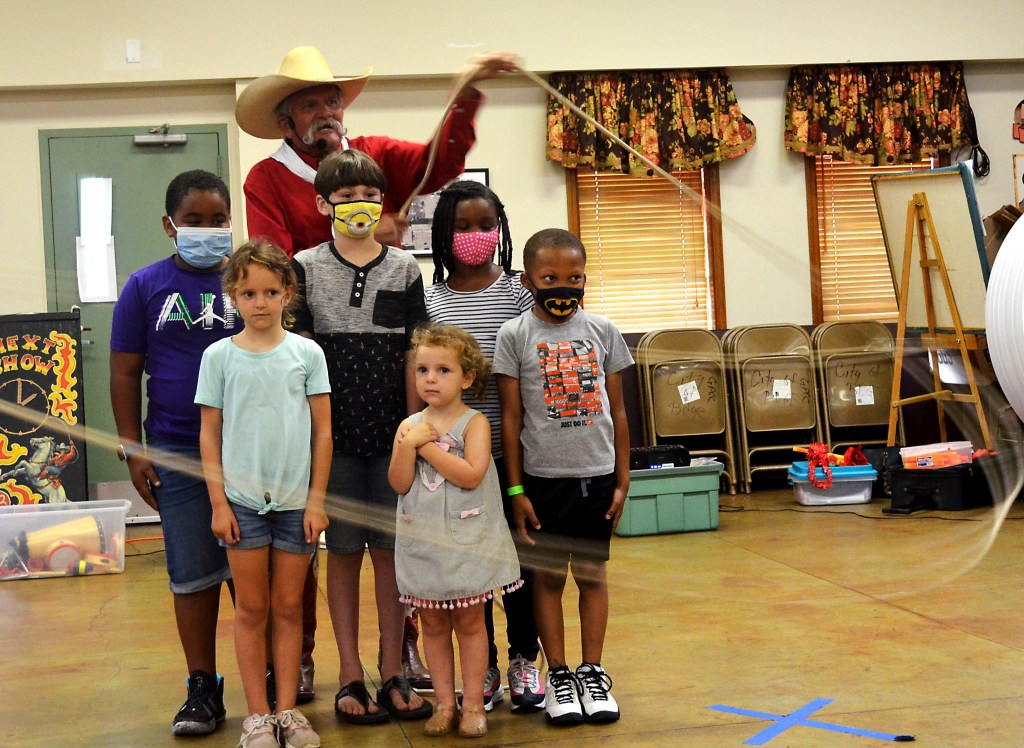 Bruce Brannen, above, shows children at Tupper Lightfoot Memorial Library how a real cowboy would twirl a rope.

When Bruce Brannen cracks the whip, his wife, Vernelle, does not flinch.

The Brannens brought their Wild West Show to Brundidge Thursday as a special event of the Tupper Lightfoot Memorial Library’s Tails and Tales Summer Reading Program for children.

The youngsters and parents in attendance held their collective breath as Cowboy Bruce cracked his whip and snapped a flower that Vernelle held between her teeth.

Vernelle said she trusts her husband’s skill with a whip and with good reason. Bruce Brennen is a master with a whip. He trusts his own abilities and he enjoys sharing the stories of the Old West with children and adults.

Bruce Brennen is a showman and he brings the flavor of the Old West to life with his whip and his stories,” Lampley said.

“He creates stories with the theme of the program,” she said. “He brings to life stories of animals that related to each theme. He brought to life animals that were a part of the Old West and the children really enjoyed that.”

On Thursday afternoon, the Brannens took the children on a cattle drive with each assuming a costumed position on the drive.

“The point man is the cowboy that rides near the front of the herd,” he explained. “The point man determines the direction and the speed and gives the other cattle something to follow.”

Dressed for their parts that cowboys led the cattle on a merry drive. At the end of the drive, they all joined in singing “Home on the Range.”

“Most all children enjoy learning about the Old West,” Brannen said. “Vernelle and I enjoy sharing our interest in the cowboy way of life with them.”

The Wild West Show was one of several programs planned for Tupper’s summer reading program.

Next Thursday, Tupper’s program will be Birds of Prey. Showtime will be 2 p.m. at Brundidge Station in downtown Brundidge.