Honey bees no match for a Hoover vacuum 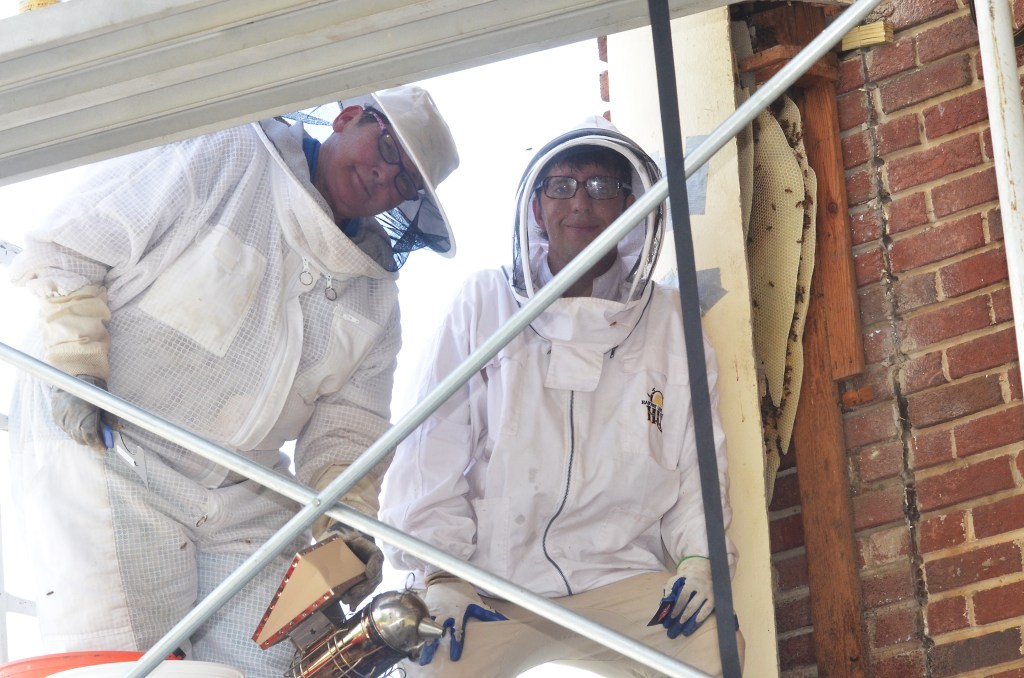 David Oty, left, and beekeeper Anne Niles removed a hive of bees from inside a column at Brundidge United Methodist Church. Niles said it was the most difficult removal she had done. The hive had about 40,000 bees. (Below) Niles and Oty prepare to vacuum the bees out of the column.

Had the honey bees held their buzzing, they might have gone unnoticed at historic Brundidge United Methodist Church and continued their honey-making inside the concrete column on the church portico.

Mike Richards, a member of the church building committee, said the bees had made their way inside the column through a seam in the concrete and had been there for two months or more before they were discovered.

“We realized right away that removing the bees, probably thousands of them, required a professional,” Richards said. “The builders of the church back in 1919, had formed the columns with wood and wire mesh and then the plaster. To get inside the column would require opening a section of the column, removing the bees, finding the queen among them and relocating the bees.”

That required more expertise “and nerve” than the church building committee members possessed. So, they called a professional beekeeper.  Anne Niles of Happy Horse practices the removable and relocation of bees in addition to pilates for performance horses.

Niles’ assistant David Oty arrived at BUCM early to prepare the site for the removal of the bees, thousands of them. The section of the column that had to be removed had been marked. Appropriately, a buzz saw cut, first, through the plaster then through the wood framework. There was no way to remove the bees from the tall, dark column so Niles and Oty vacuumed the bees from their hive.

“This was one of the most difficult relocations that I have done,” Niles said. “We were there from 8:30 a.m. until 4 p.m. and we were working the entire time.”

Because the hive was inside the tall column, it was not possible to attempt to locate the queen among, what Niles estimated to be, 40,000 bees.

“But, I’m sure we got the queen with the vacuum,” she said. “I could tell by the way the bees reacted, how they milled around the vacuum exhaust with her pheromones coming. I’m sure she’s in there.”

Niles said she is confident the queen will be successful in the establishment of a new hive.

“We left bees behind but we brought a lot to Ozark with us,” she said. “We couldn’t save a lot of the honey but, in a about a month, the queen will have raised a new swarm and ‘those are my bees!’”

Niles said her sister first interested her in saving bees. Then, she got bitten by the bee-bug while watching videos. Now, the removal and relocation of bees is a “pleasurable” pastime for her.