Down on the honey bee farm 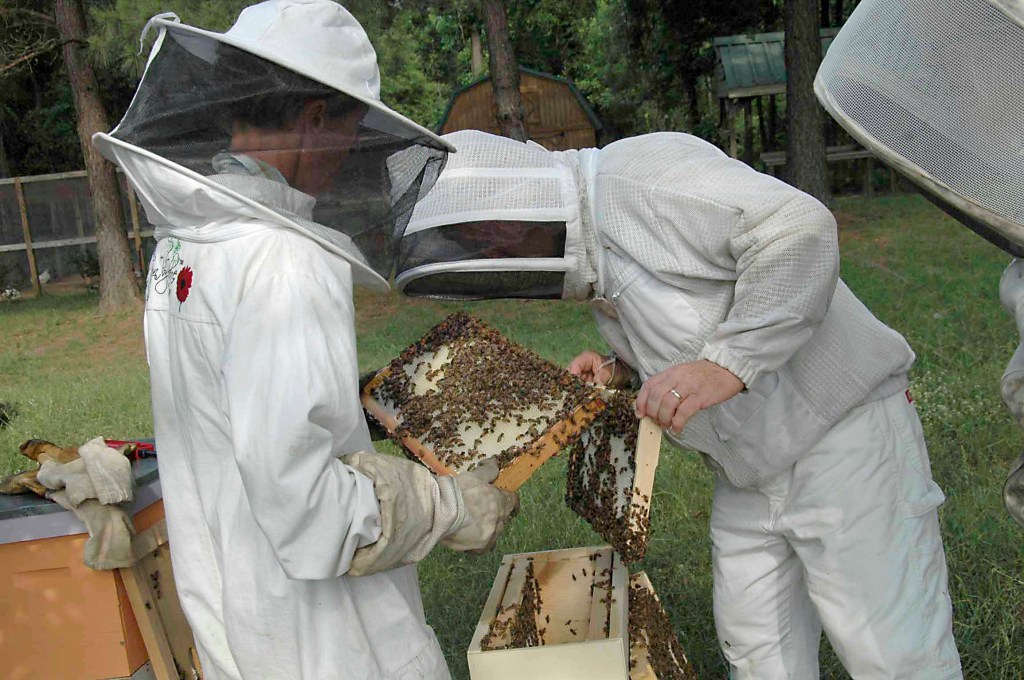 Many refer to Mike and Ann Bagley as beekeepers.

And they are. However, “honey farmers” better describes the couple that lives and raises honey bees on a stretch of picturesque farmland in rural Pike County.

Just how long they have been honey farmers, the Bagley’s aren’t quite sure. Around 2005, maybe, or ’03, is about the time Mike became interested in beekeeping.

“I didn’t know much about beekeeping but found it very interesting,” he said. “I first got information from the Alabama Beekeepers Association. Then, I started reading books about bee-keeping and watching videos. The more I learned, the more fascinated I became.”

Bagley learned that all worker bees are female. Male bees are called drones and their only job is to mate with a queen. Other than mating and foraging for food, most of the colony’s complex activities, such as raising young, storing food or even making a new queen, all take place inside the hive.

Mike passed along what he learned from his studies with his wife. Ann shared her husband’s fascination with bees and beekeeping. Soon, they decided to try bee farming on a small scale, at first.

Because all bee activities take place in the hive, that was the beginning place for any honey farmer. So, it was for the Bagleys.

Getting to honey bee farming requires a monetary investment and an investment in time.

The Bagleys needed and purchased hives, frames, a smoker, bee suits, gloves, feeders, queen extruder, bees and a queen.  Armed with all they needed, they were in the honey bee farming business, which the tentatively called Tennille Road Homey Farm.

For the Bagleys, beekeeping was a learn-as-you-go process. What they learned that encouraged them as honey farmers was there was a good, local market for the sweet, sticky stuff as a health aid.

“Honey is sweet and it’s just good tasting,” Ann said and added that honey is thought to be good for a variety of ailments, including as a good cough suppressant.

Because bees pollinate from local plants, it also is thought that honey improves seasonal allergies in both the spring and in the fall.

When the Bagleys began to harvest and bottle the honey from their hives, the demand was greater than they had thought. Many said they preferred honey over syrups, for the taste and its medicinal qualities.  The market for local honey was especially good. So, with the bee hives in their backyard, protective suits on the racks, and honey lovers knocking at their door, the Bagleys had earned the title of honey farmers.

Now, closing in on two decades down the road, business remains good at Mike and Ann Bagley’s Tennille Road Honey Farm, where the honey is made locally by some very busy bees.  The Bagleys had a barn built to house their up-graded honey-making operation. The barn includes an outdoor space for family and friends to gather on special occasions and warm summer nights.

Business remains good at the Tennille Road Honey Farm and the Bagleys are looking forward to another good “harvest” season when the autumn leaves start to fall.

Mike and Ann Bagley have earned the right to be called honey farmers. When their harvest is in the bottles and honey lovers are knocking at their door, they know all the stickiness of their labor has been worth it all.