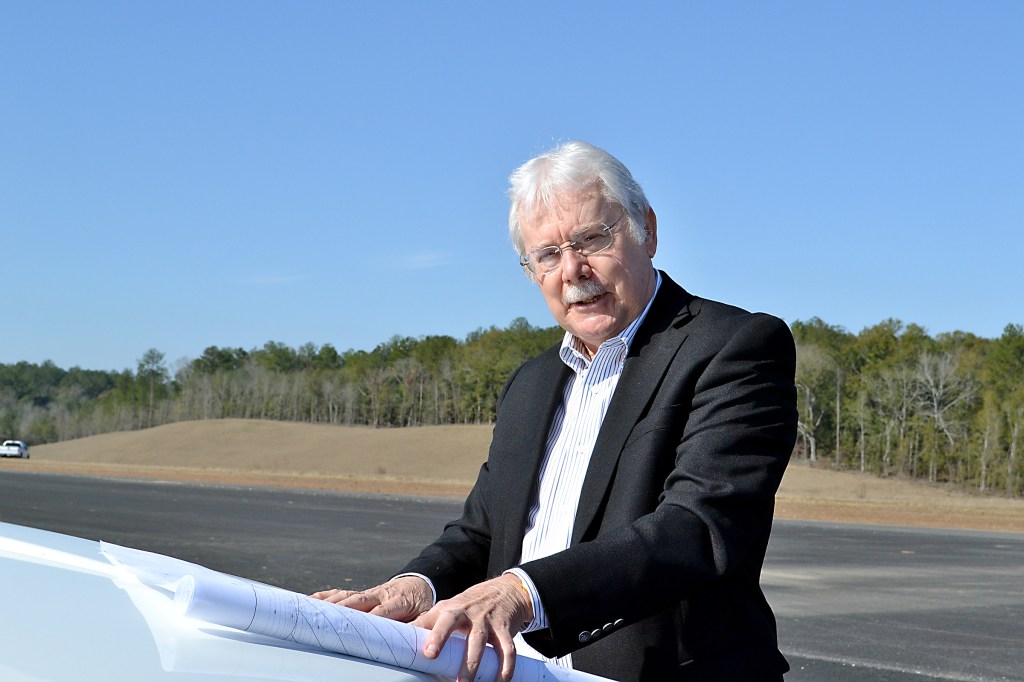 File Photo Former Troy Mayor Jimmy Lunsford died on Tuesday. Funeral services were held on Friday afternoon. People that knew him best remembered him as a visionary for the City of Troy as well as a compassionate and caring person.

The City of Troy and all Pike County are saddened by the death of former, longtime Troy mayor Jimmy Lunsford but his impact will continue to be positively felt and enjoyed for many years to come.

Well known is the impact that Lunsford had on the economic growth of Troy and the county as well. His 30-year tenure in service to the City of Troy was marked by economic and community growth including key industrial growth including CGI, Lockheed Martin, KW Can, Lowe’s, Miltope and Sikorsky Support Services and, also, for his service on the Pike Medical Foundation.

But it was not just Lunsford’s positive impact on the economy and the medical community that set him apart, he was a good leader, a good guy and he left his hand-print on most everything in the Troy.

“I was fortunate to have known and worked with Mr. Lunsford during my 18 months as the CEO at Troy Regional. Having him on the board was a great experience because of his absolute love for this Facility and our team. I have been involved with boards in differing capacities most of my adult life, but not one where folks like Mr. Lunsford truly cared so much and were so passionate. His passion for the hospital and this community was palpable and he will be greatly missed. The TRMC family prays for God’s mercy for Ms. Faye and the entire family.”

Marsha Gaylard, retired Pike County Economic Development, Corporation president, worked with Lunsford when he was mayor and also with PCED.

“One of Jimmy’s great characteristics was that he was such a people person,” Gaylard said. “He had a way of connecting with everyone, which made him such a great mayor for the City of Troy. That ability carried over into economic development which he was extremely involved in for the City and Pike County. His way of interacting with people was one of the reasons he was such a great leader and economic developer. He will be greatly missed by so many people that loved him.”

Johnny Witherington had the honor of serving with Lunsford on the Troy City Council and was a close friend of the mayor.

“What I admired most about Jimmy was his strong leadership abilities,” Witherington said. “He had the unique ability to reach out to anyone in the community. It didn’t matter where they lived, what they had, who they were. Jimmy could relate to them.”

“Jimmy was a great communicator,” Witherington said. “It was that ability to communicate that made the change of government such a smooth transition. People trusted him to lead Troy forward no matter the form of government. And he did exactly that.”

Witherington said Lunsford was a man of the people. He was not apart from them.

“No matter who or what the problem was, Jimmy was equally interested,” Witherington said. “He never walked away from anyone or from any issue. He had the unique ability to put things together. He was a good salesman. He had worked for Liberty National so he had a ready-made back-ground and he knew how to approach people and how to get his ideas across. He put together a team that benefitted, not only Troy, but the entire county.”

Speaking with 20 years of experience working with Lunsford on the city council and many more years of friendship, Witherington said Lunsford was a difference maker.

“That was one of Jimmy’s unique talents,” he said. “He was a smart man and a people person. He had a great sense of humor. He had empathy for people. He honestly cared and that goes a long way when running a city and leading people. That’s what made Jimmy unique and successful as our mayor and as a man. He will be greatly missed.”

Mack Gibson, who served as chairman of the Cultural Arts Board when Lunsford was mayor, said Lunsford was a good friend.

“But, then, he cared about everybody and he treated everybody the same. Jimmy was always the same and always positive and forward looking,” Gibson said.

When the cultural arts center was coming to fruition, Lunsford asked Gibson to serve on the board.

“I served and Jimmy did everything he could to support our efforts,” Gibson said. “He saw the vision but, then, he had that same kind of vision for everything in the city. Jimmy strongly sup-ported the arts and anything and everything that would make Troy different in a positive way from other little towns.  He was not only a great mayor for Troy, he was respected throughout the county, state and beyond. He was a great leader and a great Trojan with a vision for our city.  What an asset we have lost, such a loss.”

“Mayor Lunsford was instrumental in providing this community with a new public library,” White said. “He understood that as our library patronage continued to show growth and diversity, a larger, more technically advanced library was needed if we were to meet the information needs of this community.”

White was tasked with working with the library board, the city council, and, especially, with  Lunsford in planning, designing, and constructing a new city library facility.

“We were able to complete this project, from initial design to grand opening, in about 15 months,” White said. “It was one of the most rewarding experiences of my life, and Mayor Lunsford made it possible. I will always be grateful to him.”

Sheila Jackson, Troy director of Tourism, was hired by Lunsford during his first administration. They quickly became friends and have remained friends.

“Jimmy Lunsford loved people and everybody loved him,” Jackson said. “I don’t know of any-body that didn’t like him. Anything that he could do for anybody, he would do. He never met a stranger. He could talk to anybody about anything. He was really interested in what others had to say and he was a good listener. Jimmy Lunsford will be missed dearly but his legacy will forever live on. Rest on, dear friend. Rest on.”