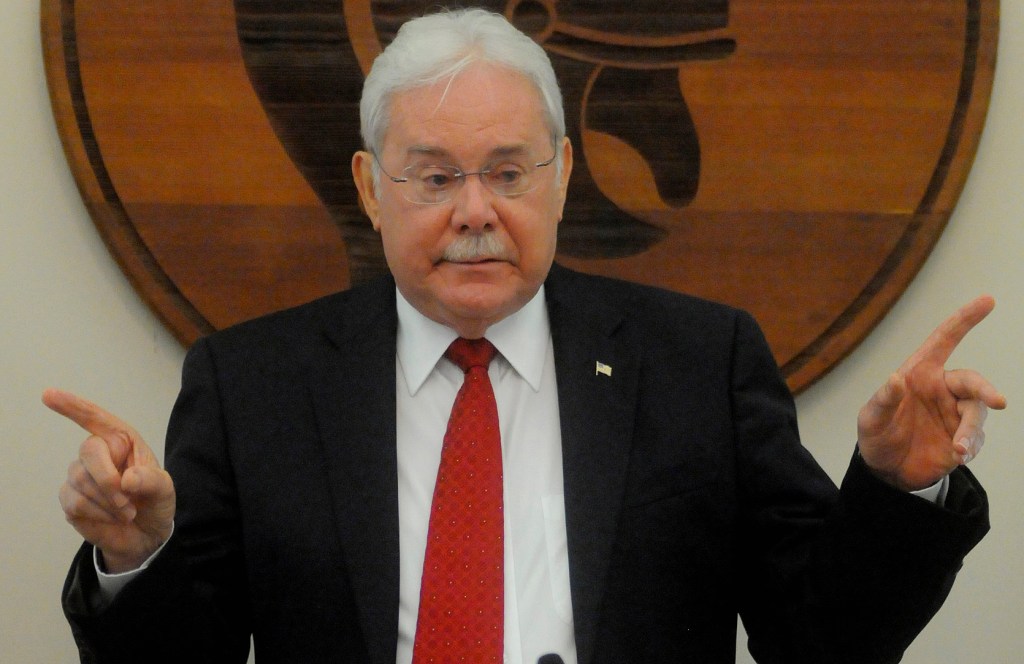 Troy Mayor Jimmy Lunsford announces that he will not seek reelection at a meeting in Troy, Ala., Friday, June 1, 2012. (Messenger Staff Photo/Thomas Graning)

The death of longtime, former Troy Mayor Jimmy Lunsford on Tuesday, May 25, 2021, left close friends “heartbroken and without words” and sent a wave of deep sadness all across Pike County.

“Mayor Lunsford devoted his life to this community and left an indelible impression on it and its people. We are saddened and shocked by his loss. We pray for Miss Faye, Jim, Holly and their family and thank them for their service of sharing him with our community, which has forever been changed by his service.”

Lunsford served Troy as its mayor for nearly 30 years and, just down in highway in Brundidge, was Lunsford’s counterpart, Mayor Jimmy Ramage.

“Jimmy and I served together as mayors all those years,” Ramage said. “He was the mayor of Troy but his heart was always in Pike County, too. Any time, we had something going on in Brundidge, he was here. He positively impacted a lot of lives. Jimmy Lunsford was a difference maker. His death marks the end of an era and he will be missed.”

Sherrill Crowe, who served on the Troy hospital board with Lunsford, said he couldn’t say enough good things about his friend.

“Jimmy was as good as they come,” Crowe said. “He had a great personality. He could talk to an executive on Wall Street as easily as he could to a farmer plowing the field. He was a people person. He had that gift and that’s why he kept being re-elected mayor. You couldn’t help but like Jimmy Lunsford. We will all miss him and his influence will be missed all around the county.”

Lunsford served Troy as one of three city commissioners from 1982-1985, and served as mayor 1985 when the city shifted its form of government.

Lunsford’s 30-year tenure in service to Troy was marked by economic and community growth, including the recruitment of several key industries including CGI, Lockheed Martin, KW Can, Lowe’s, Miltope and Sikorsky Support Services and by the expansion of existing industries.

Lunsford led the push to increase recreational opportunities that culminated in the construction of a modern sportsplex facility, a larger library, a senior center complex and the establishment of several parks and walking trails.

A retired Alabama National Guard major, Lunsford attended the University of Alabama and Auburn University Montgomery before joining the Alabama Development Office. After leaving ADO, Lunsford entered the life and health insurance business, serving 28 years in the Troy area. In addition to his civic and political duties, he served on the Board of Trustees of the Troy Regional Medical Center and on the Board of Directors of Southeast Alabama Gas District and also on a number of statewide governmental boards and agencies.

Lunsford was instrumental in the negotiation of the sale of then-Edge Regional Medical Center that resulted in the establishment of a $15 million trust fund to benefit the citizens of Troy, the construction of a state-of-the-art elementary school and the strengthening of the city’s partnership with Troy University.

[Editor’s Note: See the weekend edition of The Messenger on Saturday for more information on the legacy former Mayor Jimmy Lunsford left behind.]

BOGO at the Book Nook