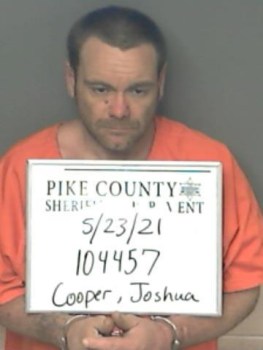 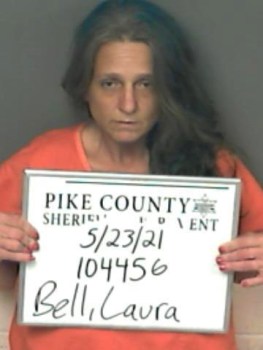 A Pike County man is in jail after allegedly beating his mother and step-father in the face with a stick on Sunday afternoon.

According to Pike County Sheriff Russell Thomas, Joshua Keith Cooper, 36, County Road 1114, was charged with second-degree domestic violence, assault, second-degree assault and unauthorized use of a vehicle. Cooper is currently incarcerated in the Pike County Jail under a $52,000 bond.

Deputy David Thomas said deputies responded to a call of a delusional man on County Road 1114 in the Mount Moriah Community. While in route, David Thomas, said deputies received a second call from a neighbor informing deputies the man had allegedly assaulted his mother and step-father and fled the scene in his mother’s vehicle.

David Thomas said after deputies questioned Cooper, they learned he had been awake for three days and had recently smoked ICE and No Show, a synthetic marijuana, around the pool at his residence with Laura Bell, 44, County Road 1114.

David Thomas said Bell barricaded herself in a closet and deputies had to force their way in to take her into custody.

“The deputies did a fine job responding to the situation and getting medical attention for the victims quickly,” Russell Thomas said. “They were also able to quickly apprehend the suspect. I also want to thank the Alabama State Troopers, the Troy Police Department and District Attorney’s Office for assisting.”