Troy falls to No. 13 Clemson 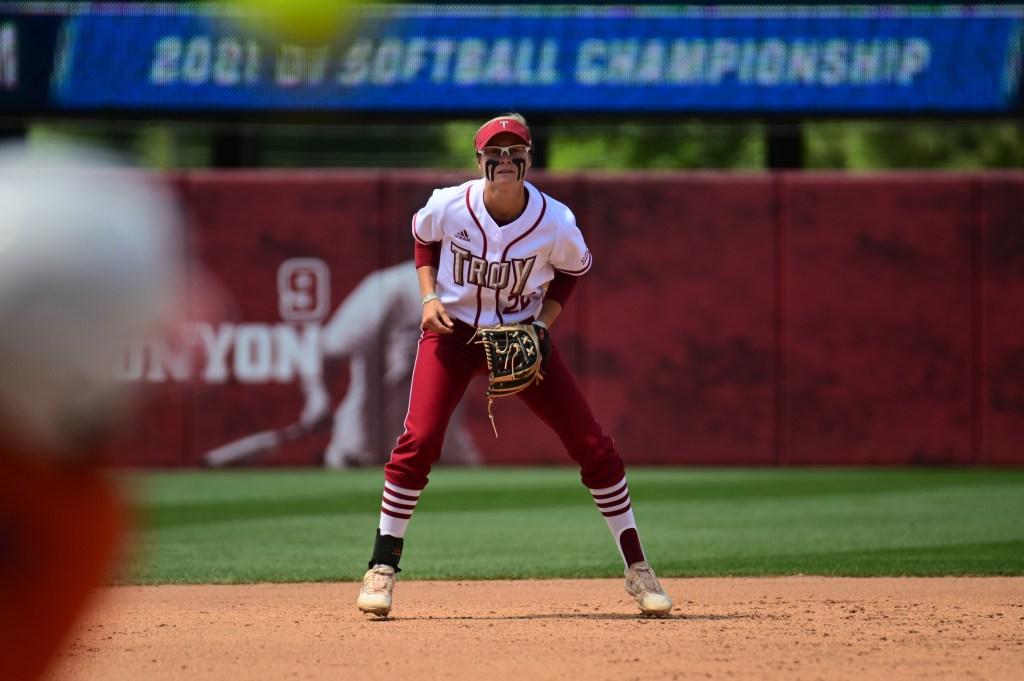 Troy University shortstop Logan Calhoun and the Trojans will return to the diamond today at 1:30 p.m. in the NCAA Softball Tournament.
Photo by Austin Bigoney

TUSCALOOSA – Making its first appearance in the NCAA Softball Tournament in 25 years, Troy fell to No. 13 Clemson, 8-0, in the opening round of the Tuscaloosa Regional Friday afternoon at Rhoads Stadium.

Clemson (43-6), the ACC regular season champion, hit four home runs, including back-to-back shots in the third inning and USA Softball Collegiate Player of the Year finalist Valerie Cagle stymied the Troy (36-16) batters through her four innings in the circle in addition to hitting a pair of home runs.

“It was a tough game in every aspect today,” Troy head coach Beth Mullins said. “Clemson is a great team, and we just didn’t make adjustments quick enough. This game doesn’t define us. We will be ready to get back out there tomorrow and play Troy Softball.”

The Trojans, the No. 3 seed in Tuscaloosa, had their chances against the Tigers with multiple runners on base in the top of the first inning and again in the fifth inning; Troy had a runner on base in each inning Friday afternoon.

Katie Webb was responsible for both of Troy’s hits in the game with a pair of singles, while Jade Sinness reached twice on a pair of walks.

The Tigers scored all the runs they would need in the home half of the first inning thanks to a 3-run homer off the bat of Alia Logoleo – it was the only hit of the frame following a hit batter and a walk. Clemson doubled its lead in the third on the back-to-back home runs from Cagle and Marissa Guimbarda before Cagle, who entered the game with 15 homers on the year, hit her second of the game if the fifth to end the game after five innings.

Cagle (27-5) earned the win in the circle for Clemson after striking out 10 batters over her four innings of work with just one hit and three walks.

Leanna Johnson (20-8) was saddled with the loss for the Trojans as she allowed six runs on five hits; five of the seven outs she recorded were via the strikeout.

• The game marked Troy’s first appearance in the NCAA Tournament since 1996 when in won an NCAA Play-In series against SE Missouri to advance to the Tucson Regional.

• Katie Webb’s two hits marked her 19th multi-hit game of the season and team-leading 30th of her career.

• Kelly Horne extended her team-leading reached base streak to eight games after drawing a walk.

Troy will take on the loser of the Alabama-Alabama State scheduled for Friday evening in an elimination game Saturday at 1:30 p.m.

The winner of that game will play again immediately following the contest against the loser of the morning contest (Clemson vs. the winner of Alabama-Alabama State).