Paramore to run for House 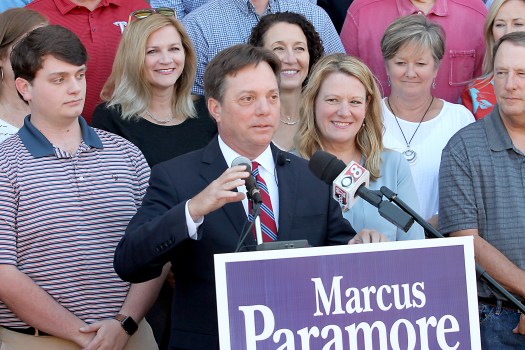 Huck Treadwell | The Messenger Marcus Paramore, center, announced he will seek the Republican nomination for election to the Alabama House of Representatives District 89. Paramore made the announcement Thursday on the steps of Troy City Hall. He is flanked by his son, Bradley, left, and wife, Leigh Anne, on the right. Paramore currently serves at the president of the Troy City Council.

Marcus Paramore announced he will seek election to the Alabama House of Representatives District 89.

Paramore currently serves as the president of the Troy City Council. He was elected to the council in 2012 and is in his third term on the council, the second as president. Rep. Wes Allen is the current incumbent for House District 89, which serves Pike County and part of Dale County. Allen will vacate the seat for to run for Alabama secretary of state in 2022.

“I’d like to announce that I’m seeking the Republican nomination for District 89 in the Alabama House of Representatives,” Paramore said from the steps of Troy City Hall. “The People of Pike and Dale counties want lower taxes, better paying jobs and a greater quality of life. I want to make District 89 a great place to work, worship and play.”

Paramore said while on the city council, he had focused on economic development and jobs. He said during his time on the council, he had helped bring more than 700 new jobs to the area through new industries, like Kimber, Rex Lumber and Universal Precast. He also said many jobs had been created through expansions from local industries, such as Lockheed Martin, Golden Boy and KW Plastics.

He said the city had also focused on retail development, such as the new shopping centers at Park Place and Trojan Marketplace.

He said having a diverse industrial and retail base had helped the economy in Pike County. He also said he was a strong supporter of small business because that was the backbone of the economy.

Paramore said he was a pro-life candidate and would defend the Second Amendment. He said he was also a strong supporter of police and fire departments as well as other first-responders.

Paramore and is wife, Leigh Ann, are residents of Troy and members of Park Memorial United Methodist Church. They have two adult sons, Bradley and Cody.

Paramore is the Director of Government Relations for Troy University. He previously worked as a staffer to U.S. Rep. Terry Everett.

Paramore earned a bachelor’s degree in economics and a master’s in sport and fitness management from Troy (State) University. He currently serves as chair of the College and University Governmental Affairs Representatives. He is a member of the Troy Rotary Club, the Business Council of Alabama and was recently appointed to the Board of Janice Capilouto Center for the Deaf.