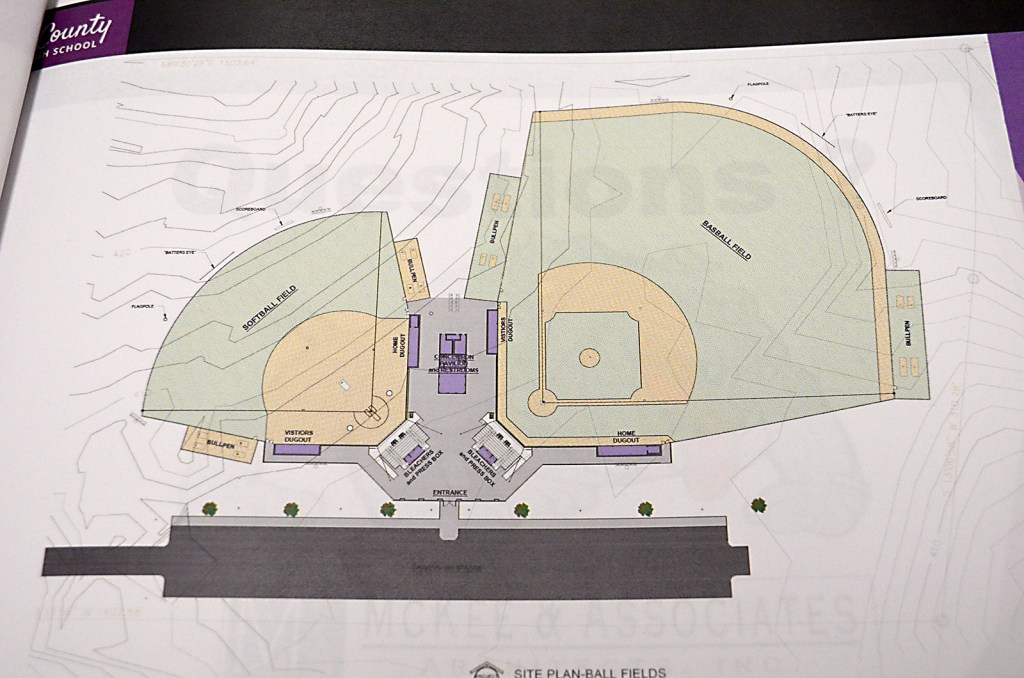 Jaine Treadwell | The Messenger A photograph of the plans for a baseball and softball field at Pike County High School.

The board approved the contract with McKee & Associates for architectural service for the 28-acre athletic complex to be located across from Pike County High School on South Main Street in Brundidge.

Dr. Mark Bazzell, Superintendent of Pike County Schools, said, as far back as he knows, and for sure since 1982, Pike County High School, has not owned its baseball/softball facilities.

“However, plans now are to build a first-class athletic facility that will be a tremendous benefit to Pike County High School and to the town of Brundidge, as well,” Bazzell said. “The Pike County Board of Education is excited to be able to provide an athletic complex like this for the school and the community.”

The PCHS athletic complex is initially planned as a $3 million, two-phase project.”

“The plans are to build a first-class athletic facility that will, in phase one, include baseball and softball fields, dugouts, batting cages and irrigation systems, restroom facilities and a concession area,” Bazzell said. “Phase 2 will include an outdoor track that will make it possible for Pike County High School to host track and field events. Phase 2 will also feature a soccer/intramural, field, a concession area and restroom facilities.

Bazzell said the inclusion of a track at the athletic facility will make it possible for PCHS to host meets that will bring a broad community of partici-pants to town.

Bazzell said even though the initial plans for the PCHS Athletic Complex are proposed in two phases, there is a possibility it could be a one-phase project.

“The Banks School project began as a two-phase project, but is now a one-phase project,” Bazzell said. “That is a possibility for the PCHS Ath-letic Complex project. We will just have to see how the bids come in on the project. The board would also like to make the entrance to the athletic facility attractive. We are also working toward that.”

The property for the athletic complex was donated to the Pike County Board of Education by the Brundidge Industrial Development Board through the City of Brundidge.