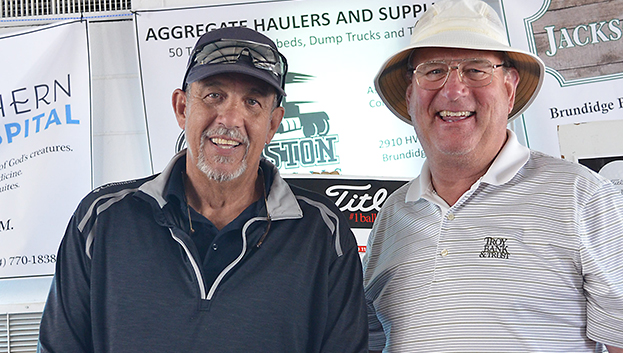 Eighteen two-man teams vied for the tournament championship but there was no way to beat a 60 said Cot Wallace, tournament awards emcee.

“I don’t know who could beat a score like that and Randy and Ronnie played with the lowest handicap,” Wallace said as he congratulated the winners, making note that Walls was a highly-recruited Pike County High School quarterback, who went on to quarterback Auburn University in the “Punt-Bama-Punt” game that still sticks in the craw of Bama fans. Mobley was a championship golfer at Troy University, a four-time All-American, a two-time National Champion and is a Troy University Hall of Fame member.

“We were just way outclassed,” the other golfers laughed.

The second-place finishers in the tournament were Chuck Dickert and Jason Ellis. Third place was awarded to Cot Wallace and Andy Head.

The longest drive was also almost unbelievable. Jackson Cleveland drove his tee shot on No. 5 an astonishing 392 yards with no wind to urge it along.

Closest to the hole on No. 8 went to Allen Rodgers and, on No. 12, to Josh Prestwood. Both, laughingly, said that was the closest they’ve ever gotten to a hole-in-one.

The Rotary Club thanked Julia’s Restaurant and Hook’s Barbecue for providing lunch for the golfers and for all the club members for their support in the planning and carrying out of the annual memorial tournament. Douglas Botts was a longtime active member and was always involved in club fundraisers. He served the club as president and was secretary/treasurer for more than 30 years.

Botts was also honored by the club as a Paul Harris Fellow, which is the highest award in Rotary.