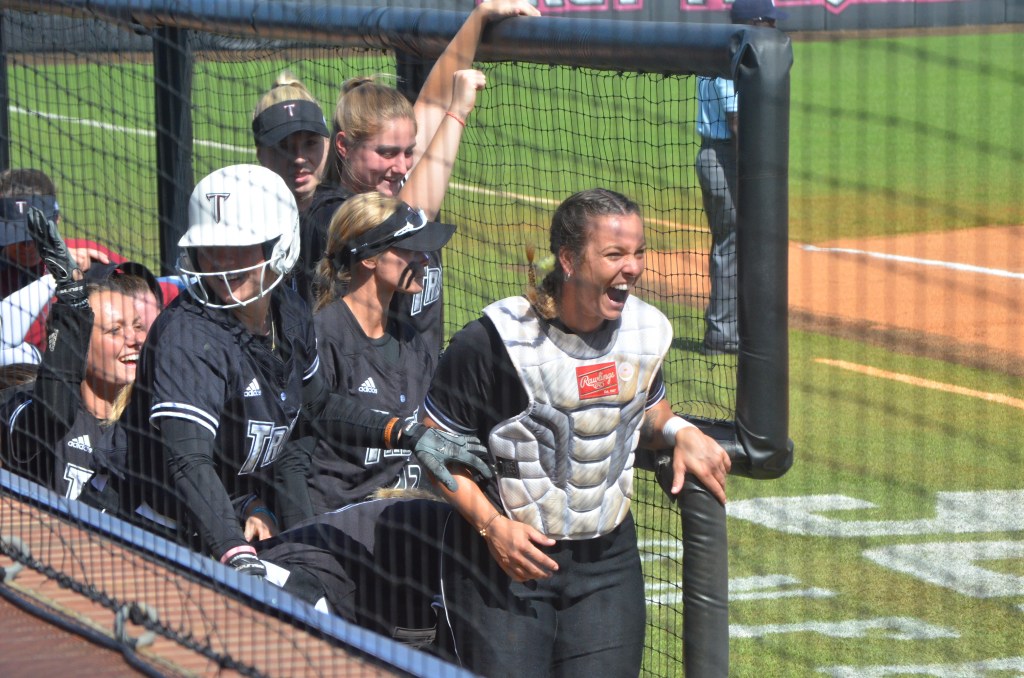 Mike Hensley | The Messenger The Trojans celebrate after a Kelly Horne home run on Thursday afternoon in Troy.

Troy Softball is heading to the NCAA Tournament for the first time since 1996 and the first time as an at-large selection after earning the No. 3 seed in the Tuscaloosa Regional, the Trojans learned Sunday night while watching the NCAA Selection Show in their team room at the Troy Softball Complex.

Troy will take on No. 2 seed Clemson in the opening game of the Tuscaloosa Regional on Friday at 2 p.m. from Rhoads Stadium, while Alabama, the No. 3 overall seed, will play Alabama State in the nightcap of the opening round.

“I’m just so proud for the program, our university, our girls and the Sun Belt Conference,” head coach Beth Mullins said. “I know everything that our girls have worked for. It’s been a year-and-a-half filled with adversity, but they just bought into the one game at a time moto. For it to work out this way, I’m speechless. I’m a really proud coach and I cannot wait to get back to work on Monday and take this amazing group of kids to Tuscaloosa.”

The Trojans posted a 17-6 mark in league play and swept five conference series for the first time since 2005. Troy finished the season 36-15 overall and second in the Sun Belt Conference, which received four overall selections into the NCAA Tournament.

“I am so proud of our softball team and our entire coaching staff who in an extremely challenging year due to COVID-19 excelled on the diamond as proven by earning one of just 33 at-large selections into the NCAA Tournament,” Director of Athletics Brent Jones said. “They finished second in the regular season in the premier mid-major conference in the country and won multiple games against Power Five opponents. This is well earned, well deserved and the entire Trojan Nation is celebrating tonight.”

The Trojans advanced to the semifinals of the Sun Belt Tournament this past week and recorded three wins over Power Five opponents – Ole Miss, North Carolina, Georgia Tech – their most since 2012.

Ticket information will be made public on TroyTrojans.com and Troy Softball’s social media accounts (TroyTrojansSB) when available.