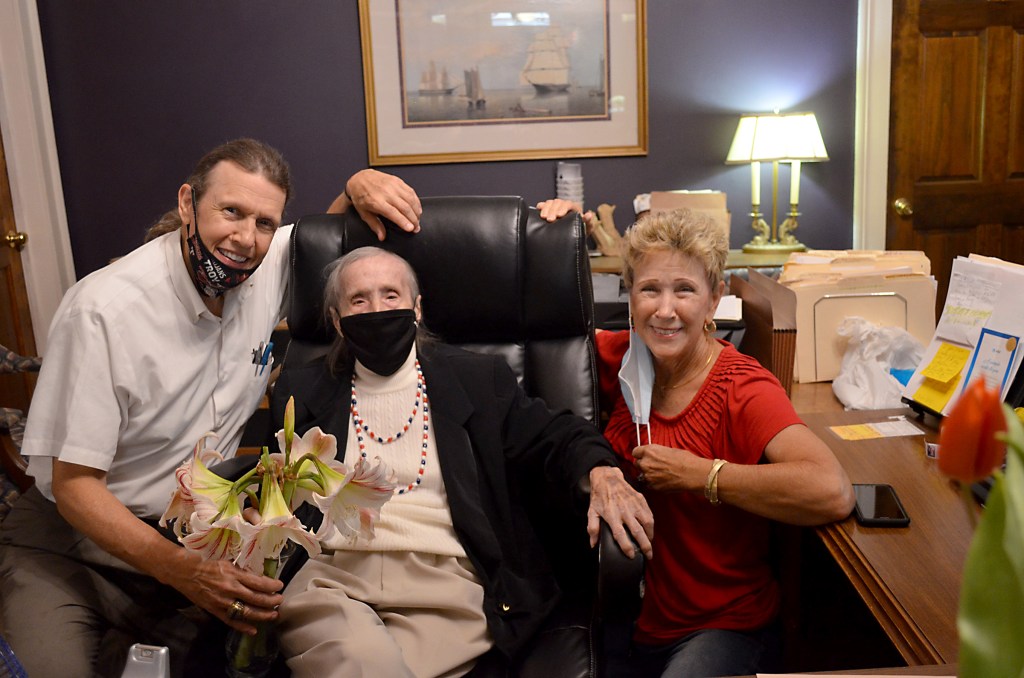 Jaine Treadwell | The Messenger Tim Magee (left) threw at 95th birthday party for his mom, Dorothy Magee, Monday. Dorothy Magee’s life has been adventure-filled with travels around the world and “down under.” Sometimes she traveled solo; other times her son was her chaperone. Her daughter, Sherry Cook, is pictured at right.

For Dorothy Magee, it was a happy 95th birthday.

Her son, Tim Magee, hosted the party for her, as he has done so many times.

The party was held at Magee’s law office on South Brundidge Street Monday, and all the attention was focused on Dorothy Magee, who has led an adventurous life, from the “git go,” said her daughter Sherry Cook of the Gulf Coast.

At age 95, Dorothy Magee has lived through 18 United States presidents. She lived through the Great Depression and lived at a time when people were still talking about the sinking of the Titanic.

“Dorothy had the wanderlust,” Tim Magee said with obvious pride in his mom and her adventurous ways. “There were three of us kids, and our dad was a flight engineer and co-pilot for TWA. He wasn’t home a lot so we were greatly influenced by our mom. She had grown up in Iowa, but she was not grounded there.”

Dorothy Magee was not going to stay in the Iowa cornfields all her life. She wanted to go places, see things and have adventures along the way. The best way to see the country was from “up top.” So, she became a licensed pilot and she flew in powder-puff derbies all over the country.

But, flying across the country was not exciting enough for Dorothy Magee. She wanted to see the world. And, with a husband who worked for TWA, the world was her oyster.

She traveled to countries that would otherwise have only been a dream for her. She visited 13 countries and went to Australia 15 times, some of those trips with her son.

“On one of those trips, Dorothy and I climbed the Sydney Harbour Bridge,” Magee said. The bridge is 3,770 feet in length and 161 feet in height and Dorothy walked and climbed it like she was 29 years old. The view was beautiful and neither of us would have taken anything for the climb.”

Dorothy Magee was a teacher. She enjoyed teaching and she loved Australia, so why not combine the two?  She did, and found a teaching position at a 15,000 square-mile cattle station along the Marsh River in the Australian Outback.

“She was at the cattle station for more than year and lived in a small cottage on the ranch,” Magee said of his mom. “She loved being there and, if she found the living to be a hardship, she never said so.

“Dorothy has always loved adventure and she would go looking for it. She traveled all over the world and she found adventure everywhere she went.”

When Dorothy Magee decided it was time to come in for a landing, she did so here in Troy, Alabama.

She worked for Dr. Johnny Long at Troy University until she decided it was time to enjoy the quieter kind of life. However, she and Tim continued to travel many miles in support of Troy University football and she was one of the Trojans’ biggest fans.

For 13 years, Tim Magee has been the primary caretaker for his mom and he wouldn’t take anything for the time they have spent together and the adventures they have shared.

“My mom was adventurous,” he said. “She was as happy grading redwood trees as she was flying solo across the country. You can’t ask for a better life than that. I’m thankful for the adventures that we have shared and that, at age 95, she is here with us. She is a blessing.”