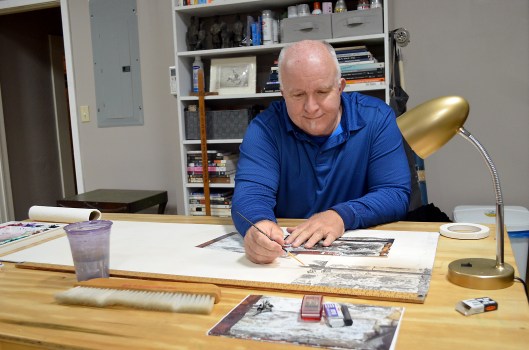 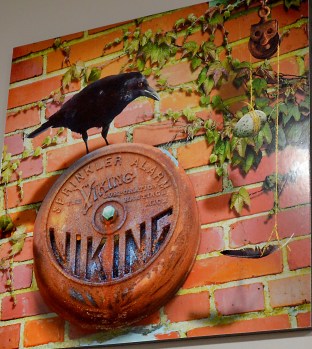 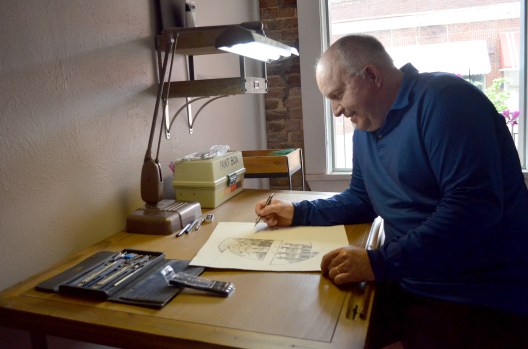 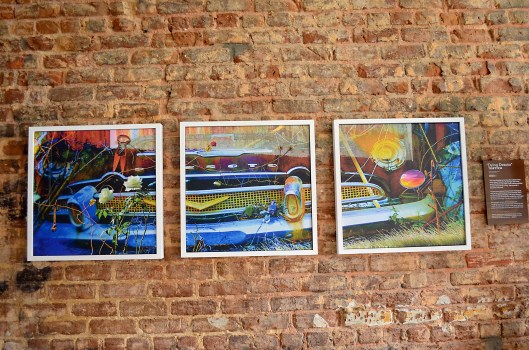 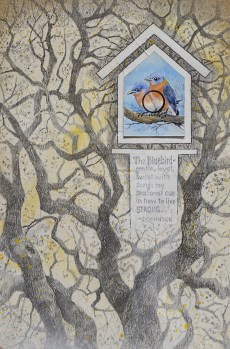 Jerry Johnson grew up in Oklahoma, the Dust Bowl State. He learned at an early age about the dark clouds that are often the handiwork of Mother Nature. Later in life, he learned that dark clouds may also be the storms of life.

But, Johnson also recognized that there is mystery, wonder and beauty in those dark clouds, those sienna clouds.

As an artist, Johnson, who is semi-retired from Troy University, explores and captures those moments in his artwork as a designer, illustrator, educator and artist.

“It has been my life’s work to explore the impact of the creativity and design processes for facing life’s issues and obstacles,” Johnson said, as he relaxed at his desk at Sienna Cloud Creative in Troy.

Johnson’s downtown studio might be thought of as his man cave where he goes to create and also as a pub for artists and art lovers to gather to share ideas and thoughts. His studio is also an art gallery and even a museum of incidental, but collectible, items related to art and with ties to family, friends and places.

Sienna Cloud Creative is a place that has been in Johnson’s heart and mind for more years that he can remember, perhaps, even as long ago as when he was a young man playing with a Christian rock band, that charted two Top Ten songs.

And, certainly during the 30 years that he was a full-time teacher of art.

But it was not until Johnson semi-retired from Troy University that Sienna Cloud Creative became a reality.

“I wanted a studio that was away from where I lived and worked,” Johnson said. “I really wanted a place downtown Troy where friends could come to work and share ideas. A place for collaboration with results.”

Johnson found the near-perfect place on North Three-Notch Street just off the square in downtown Troy. And, the foundation of the available building was in the arts. It was once the studio of noted Troy photographer Holman Johnson, no relation to Jerry Johnson, but certainly the two were kindred spirits.

“The building had been vacant for a long time and a lot of work was needed,” Johnson said. “But, for me, for an art studio, it was the perfect place.”

Next door to the available space was Make Art, an art studio for children. Just down the city street were the Johnson Center for the Arts, The Studio and a pottery workshop. Down and across the street was a tattoo parlor and a T-shirt design shop.

Jerry Johnson could not have found a more perfect place for Sienna Cloud Creative than the former photography studio.

Johnson’s studio has office space, work space, a collaborative space and gallery spaces. There is also space to host featured even and impromptu gatherings.

The artwork featured at Johnson’s downtown studio is his own and that of friends.

Included in the “Birds Inspire” showcase are two verses from Matthew 6: “Look at the birds of the air; they neither sow nor reap nor gather into barn, and yet your heavenly Father feeds them. Are you not of more value than they? And, which of you by being anxious can add a single hour to his span of life?”

Jerry Johnson’s Sienna Cloud Creative is a place of peaceful solitude. A place where artists are invited to come and create, to reflect or to share. And, his hopes are that his studio will be a part of a larger community of artists who come together for inspiration much as the birds of the backyard provide inspiration for artists and others.