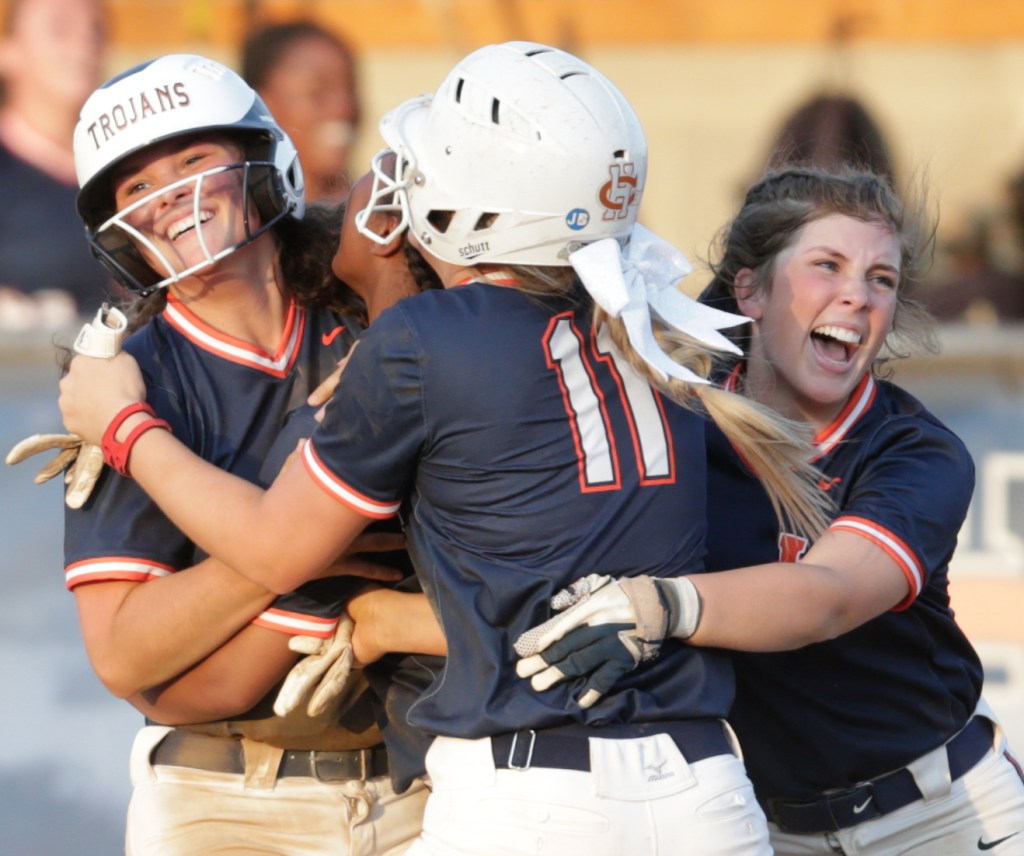 Dan Smith | The Messenger Stella Gilbreath, left, is mobbed by teammates Dakota Berry, Madison Stewart and Ashly Shaver, right, after hitting a walk-off, two-out double in the bottom of the seventh inning

Charles Henderson High junior Stella Gilbreath crushed a double with two outs in the bottom of the seventh inning to drive in two runs and give the Lady Trojans a dramatic 8-7 come-from-behind-win over Carroll of Ozark Thursday night in Troy.

Trailing 7-4 heading into the bottom of the seventh, the Lady Trojans sent seven batters to the plate, with Gilbreath driving the ball into the gap to score Madison Stewart and Ashlyn Shaver for the tying and winning runs.

“We’ve been a team that has been able to come back, and sometimes we fall short, but I am very proud of these girls for being able to stick through the game,” said first-year CHHS Head Coach Khadija Neely. “They’ve shown this fight against adversity a long time this season, and I am glad they are able to come out on top today.

“I think we have a great team here. Every one of these girls rely on each other, and none of them are selfish. I teach them all to be selfless. They just continue to pass the at-bats back and back, and that’s been our mentality all year.”

The Lady Eagles of Carroll took a big 6-0 lead in the top of the second inning, but CHHS responded with one run in the bottom half of the second when Gilbreath doubled to right, reached third on a passed ball and scored on a sacrifice fly by Dakota Berry.

Ozark extended their lead to 7-1 in the top of the fourth inning, and it was not until the bottom of the sixth before the Lady Trojans could cut into that lead.

Madison Allen led off the bottom of the sixth with a single, Heather Maxwell reached on an infield error, Stewart and Gilbreath singled, and the score was 7-4 after six.

Carroll was held scoreless in the top of the seventh inning, with the Lady Trojans staging their comeback in the bottom half of the inning.

Allen and Mckenzie Cain scored with one out, and after another out, Stewart walked, Shaver reached on a fielder’s choice, bringing Gilbreath to the plate, who wasted no time in launching the double to left-center field, scoring Stewart to tie the game and Shaver with the winning run.

Gilbreath had quite the game, going 3-for-4 at the plate with four RBI, and earning the pitching victory on the mound in relief, allowing one run on four hits over 5.1 innings while striking out five.

Stewart, Molly Garrett and Allen had one hit apiece also for the Lady Trojans.

Coach Neely also had high praise for the two seniors for the Lady Trojans on Senior Night, in Ashlyn Shaver and Gracie Sneed.

“Those two have been the leaders of this team,” said Coach Neely. “Both of them have done over and beyond what I have asked them to do. They have been there for all of their teammates. They are vocal, and they play every game for us. I could not ask for a better night tonight.”

CHHS is in a tournament this weekend in Montgomery, and will begin the Area Tournament Tuesday at Andalusia. The Lady Trojans will face Greenville at 10 a.m. Tuesday, and if they finish in the top two, will advance to the Super Regional Tournament to be played at Gulf Shores.