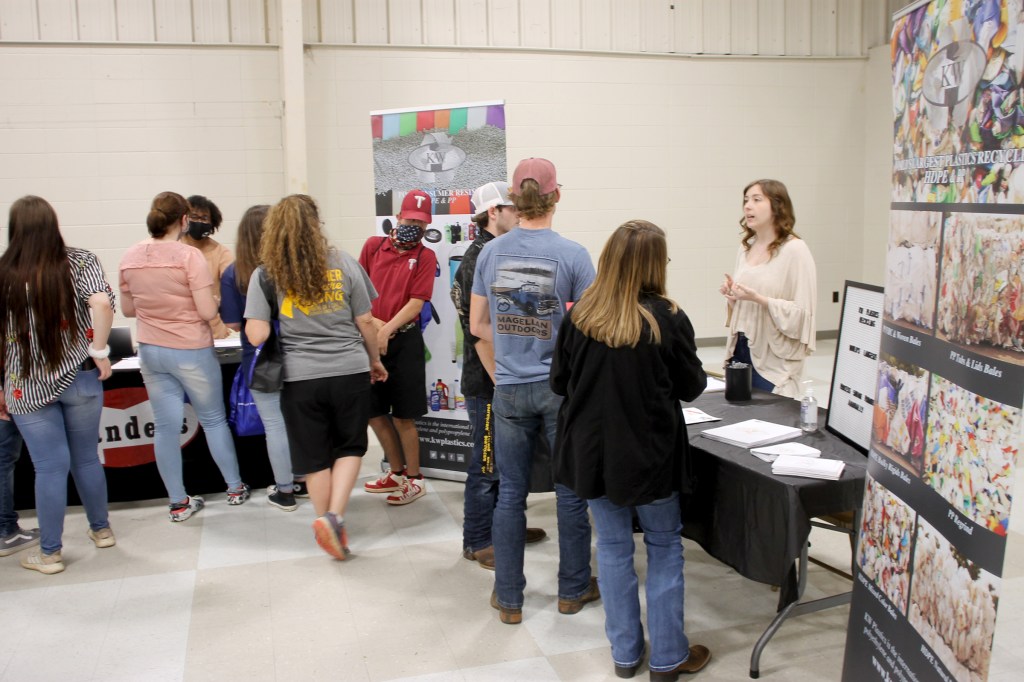 Huck Treadwell | The Messenger A majority of the franchise owners on U.S. Highway 231 (top left) are looking for employees to fill jobs. The restaurant and tourism industry aren’t the only employers searching for employees. The Pike County Chamber of Commerce and Southeast Alabama Works hosted a job fair at the Pike County Cattlemen’s Complex to try and connect potential employees with employers.

The landscape of the American economy is changing as the country begins to transition to a post-COVID era.

Katie Thomas, workforce development manager for Southeast Alabama Works, said the state is down to about a 3.6 percent unemployment rate. She said that meant people that wanted a job, probably had a job. But, the majority of franchise restaurants on U.S. Highway 231 in Troy need employees.

Pike County Chamber of Commerce President Dana Sanders said  the restaurant and hospitality industry had been hit hard by the pandemic. And, for those businesses, recovery was proving to be problematic because they were having a hard time hiring new employees to return to normal staff levels and operation hours.

Thomas said the way unemployment statistics are tracked, when a person files for unemployment, they receive benefits. When those benefits end, if the person still doesn’t have a job, they are no longer statistically tracked. So, she said, there can be a lot more people without a job than the unemployment rate indicates.

So, the questions becomes, why aren’t people returning to work?

According to Troy University Professor of Economics Dan Sutter, it’s a simple matter of math.

“Nationally, we have millions of people on unemployment and about 7.4 million jobs to fill,” Sutter said. “The problem were having now is solely attributed to the extension of jobless benefits. When [the federal government] adds $300 a week on top of what unemployment benefits the state is paying, as much as 40 percent of the work force would make more money on unemployment compared to what they would make working a job. In many cases, people can make a lot more money by not working.”

In order to try and get people back on payrolls, Thomas said they were trying to think creatively and draw people back into the job market.

Troy Mayor Jason Reeves said so few people searching for jobs is putting pressure on employers to raise wages or offer better benefits. He said he encouraged people to think about the long term and take advantage of the opportunities employers were offering now.

Reeves said there was also a danger the unemployment benefits could have long-term consequences for the local economy.

“What we don’t want to do is keep people out of work so long the demand for employees goes away,” Reeves said.

Sutter said until the federal government makes changes to its unemployment policies, there will continue to be a shortage of workers.

“It’s an ill advised policy at this time,” Sutter said. “The issues we were having last spring, you could see the rationale in the policy. Businesses were being closed, especially restaurants, because of the pandemic. So, the policy was justifiable because some people were going to lose their employment through no fault of their own.”

Sutter said the problem would continue as long as people were making more money by not working. He also said he anticipated a policy change in regards to unemployment benefits.