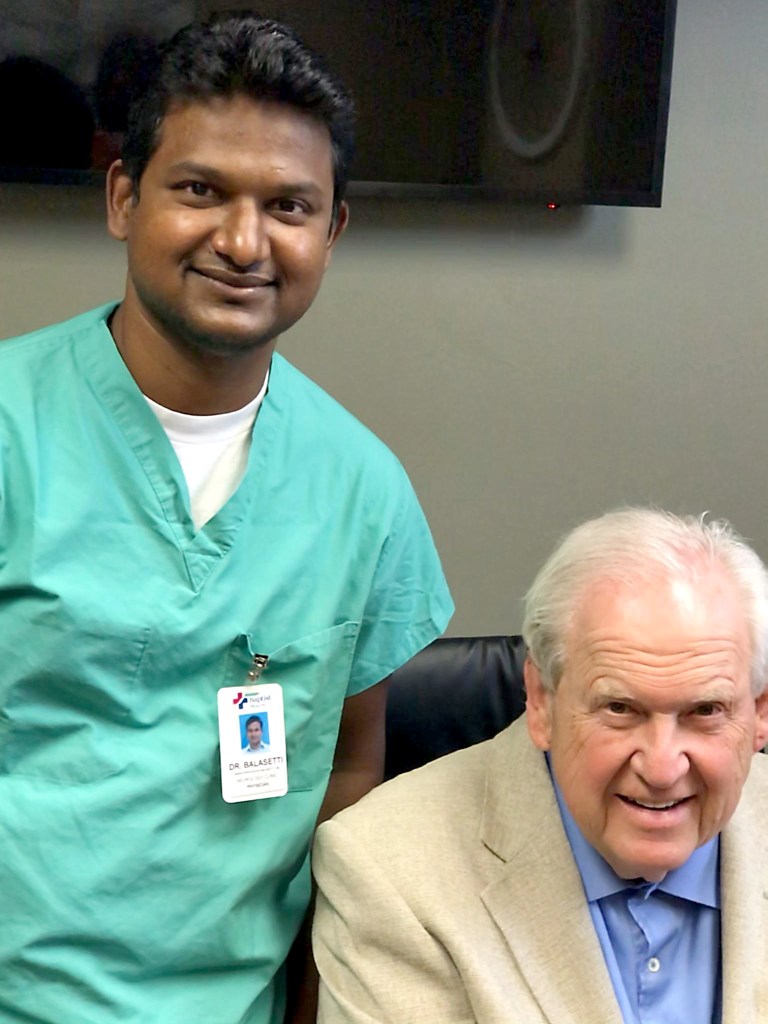 Mike Amos, right, had a stroke April 5 and was rushed to Baptist Medical Center South in Montgomery. Dr. Vamshi Balasetti, left, a neurointerventionalist, preformed an innovative medical procedure, called a thrombectomy, that removed the blood clot from Amos’ brain.

Mike Amos fell asleep after watching Baylor defeat Gonzaga 86-70 in the NCAA men’s basketball tournament finals. When he woke up, he was in he hospital.

His wife, Carol, said she had gone to bed at 9:30 p.m. after the game and was up early on Tuesday morning. She said Mike was still asleep in the recliner But, she didn’t think anything of it. Mike normally would go back and forth between sleeping in the bed and his recliner.

The alarm went off at 5:30 a.m. But, when Mike didn’t get up to get ready for his Today in LA show on Troy Cable, she knew something was wrong.

“When the alarm went off and he didn’t respond, I went over to wake him up,” Carol said. “He didn’t open his eyes and I could tell instantly from the way he was holding his head, something was wrong. He was moving his left arm, like he was trying to get up, but his right side was paralyzed.”

Carol said she dialed 911 and paramedics from the Troy Fire Department arrived within minutes. She said it was obvious to everyone that he had a stroke. Carol said Mike was outside of the treatment window to use clot busters, so the paramedics were on their phones looking for hospitals with a “green light” for treating stroke victims. They had two options — Baptist Medical Center South and Jackson Hospital. Carol just picked Baptist.

She said her decision to pick Baptist must have been guided by God.

She said the ambulance took Mike to Baptist and by the time she arrived, he was already in surgery.

“I was told he had a large clot that was more than three inches long,” she said. “They had already started the surgery. That’s how quickly things were moving. Time is a very important factor when treating a stroke.”

Carol said she was informed that Baptist South had a neurointerventionalist on staff, Dr. Vamshi Balasetti, who specializes in minimally invasive techniques to diagnose and treat vascular diseases of the brain and spinal cord. Balasetti performed a surgical procedure called a thrombectomy on Amos. Balasetti inserted a catheter in an artery in Amos’ groin and maneuvered the catheter to his brain. He then inserted a stent-retriever into the catheter and used it to remove the blood clot.

“A couple of hours later, they told me I could see Michael in the ICU,” Carol said. “When I was going up the hall, I could hear him talking in his normal voice and he was making sense. It was the most amazing thing I have ever seen.  I could see him moving his arms and legs. It was two days before they would allow him to try and walk. But, he was able to get up and walk with some attendance.”

Mike said he didn’t really remember anything after he went to sleep the night of the championship. He said he thinks he remembers some things — riding in the ambulance, the ambulance making a turn and a nurse wheeling him into surgery on a gurney. But, he said he’s not really sure if those are actual memories.

But, he said there is one thing he is sure of.

Carol said she wants to tell Mike’s story to raise awareness about strokes and the type of lifesaving treatments that are available.

“After Mike’s stroke, I did some research and found out there are only neurointerventionalist in Birmingham, Huntsville, Mobile, Dothan and Montgomery,” Carol said. “I really want people to be aware of what they can do for stroke victims. We didn’t know about this. It just happened that all of these details lined up for Michael to get the treatment he needed. We were just really lucky. I want all of the first responders in this area to be aware of this treatment. I also want everyone and their families to know about this. I just want to get the word out so people know about this procedure.”

Mike returned home on Friday, just three days after he was admitted with a life-threatening blood clot. On the following Monday morning, he picked up the phone and participated in the call in on Today in LA. The following Monday, he went to the studio and returned to the daily broadcast of Today in LA. This Friday morning, Mike, Bill Rice Jr., and Forrest Lee will broadcast Today in LA from the downtown square to promote TroyFest. His son, Mike, will also join the broadcast through Zoom.

Mike said he wouldn’t be on the square on Friday morning, if it weren’t for a lot of people.

“I’m very, very grateful to a lot of people,” he said. “I want to start with the firefighters. They are really our local heroes. The people at Baptist were all very professional and took good care of me. I’ve become friends with Dr. Balasetti. I’m very thankful he could treat me and that I was able to go right back to work. I think he is going to make a lot of families happy in the future by treating people with this procedure.

“I also want to thank all of my friends that have prayed for me and shown so much love for me and my family. And I want to thank my family for supporting me and taking care of me. And, lastly, I want to thank the Lord for giving me a second chance at life.  I love Troy and I love Troy University. I’m thankful I’ll have an opportunity to see my community and the university continue to grow and I hope I can be a part of that.”