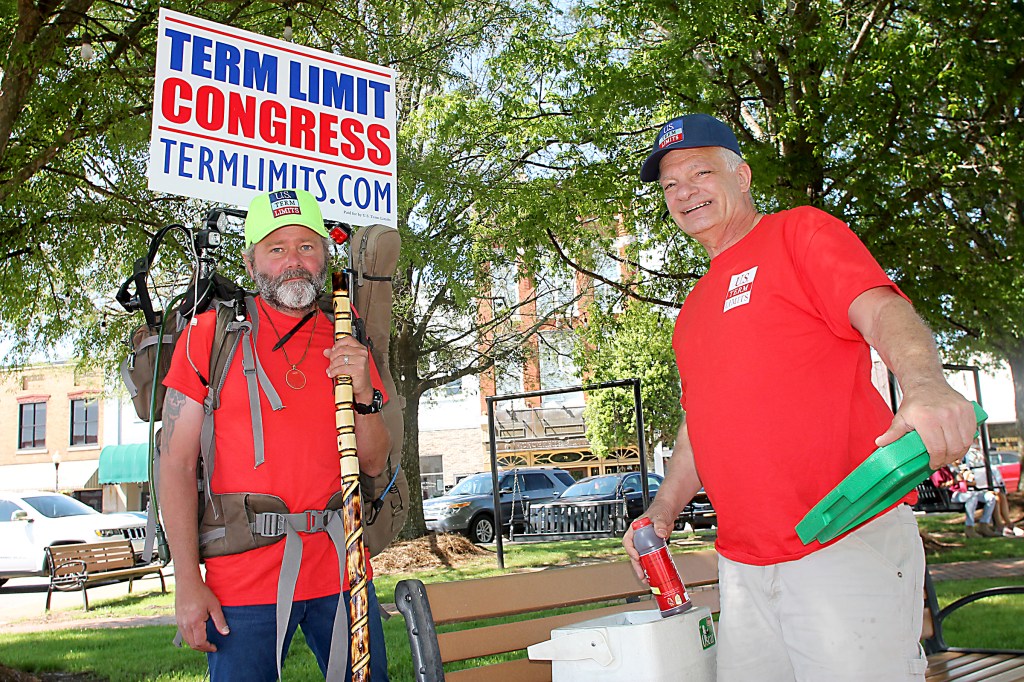 zzy Israel, left, is trekking from Florida to Washington State to raise awareness for a movement to limit terms in the U.S. Congress. Jeff Tillman, right, is a member of U.S. Term Limits and is acting in a support role for Israel. The men traveled through Troy on Monday and stopped at the downtown square for a rest break.

When Izzy Israel decided it was time to make a change, he put the rubber to the road.

Israel, from Nashville, Tenn., lost his job in the music industry during the coronavirus pandemic. He said he had time to do some thinking and focused on something he could change, or be a part of changing. And, he believes it’s time members of the U.S. Congress have term limits.

“It’s something I’ve been thinking about for a decade or more,” Israel said. “We have people in Congress that are making policies and laws for their entire lifetimes. I think that’s highly corruptible. Big money is guiding our policies. You can see it. I think it’s time for term limits and I wanted to be a part of that change.”

In order to get the message out, Israel decided to walk across the United States, from the southeastern most point in the Florida Keys to the northwestern most point, Cape Flattery, Washington.

He began his cross-nation odyssey on Dec. 22, 2020, and hiked up the Florida panhandle solo until he reached Tallahassee. While generating some publicity for his cause, he attracted the attention of the national organization, U.S. Term Limits.

Jeff Tillman, a member of U.S. Term Limits, volunteered to make a trip down south from his home in Michigan. His job is to provide support for Israel in his trek across the nation.

“Once I met this guy, I was amazed at how dedicated he was,” Tillman said. “He has a wife and six children. He left home, with the support of his wife and children, to get out and promote a cause he believes in.”

Tillman said his role in the mission is to provide support to Israel as he treks across the country.

“I offered to go with him,” Tillman said. “My job is to support him and make his life a little bit easier and a little bit safer.”

Israel said a lot about his journey has changed since meeting Tillman and teaming up. He said having support enabled him to lighten his by only carrying essential supplies on his back as well as having a safe place away from the bugs and out of the weather to sleep.

Tillman said it would take a constitutional amendment to limit the terms U.S. congressmen and senators serve. He said there are two ways this can happen. The first is for Congress to impose term limits on itself. Israel said “Congress was having a hard time doing that to itself.”

However, Tillman said the U.S. Constitution provides a provision that allows the American people to bypass Washington and impose legislation through a  convention of states. In 2016, U.S. Term Limits launched the Term Limits Convention, which requires 34 states to pass legislation to support term limits. Once 34 states have signed on, the convention can convene and set the groundwork for a proposed amendment to the U.S. Constitution.

“Every year we get more and more senators and congressmen in support of term limits,” Tillman said. “Polling has shown that about 85 percent of Republicans and 80 percent of Democrats support term limits. The most popular option is three terms (six years) on congressmen and two terms (12 years) on senators.”

Israel said his trek has gotten a little longer now that he has some support. He plans to travel through as many states as possible, not just the ones on a straight line from Florida to Washington state. He hopes at the end of the road he will see a change in Washington, D.C.

“Times are changing and we need to keep changing with the times,” he said. “And, so too do the faces in Washington, D.C.”