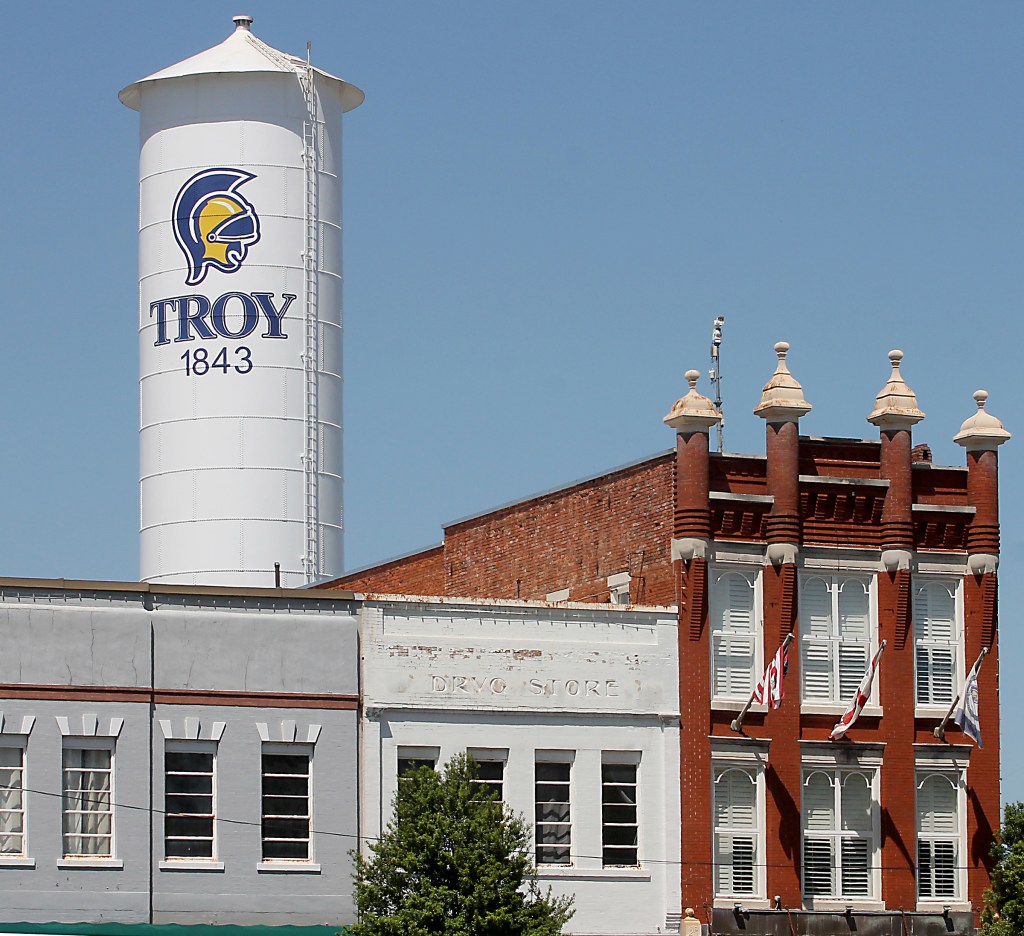 Huck Treadwell | The Messenger The standpipe, or water tower, on the north side of the square in downtown Troy was recently recognized with a Landmark Award from the American Water Works Association.

One of Troy’s most recognized landmarks has been recognized by the American Water Works Association.

Ethan Mount, water and wastewater engineer for the City of Troy Utility Department, said the 125-year old standpipe in East Walnut Street was recognized with a Landmark Award by the AWWA.

The standpipe, more commonly called a water tower, towers over the square in downtown Troy. The standpipe was erected in 1895 and Mount said water tower has been in use by the city ever since. He said the award recognizes water works that are at least 50 years old and have a significant relationship with water supply, treatment distribution or technological development.

The water tower is painted white and bears the city’s logo, marked with 1843, the year of the city’s incorporation.

“The standpipe is 125 years old,” Mount said. “In 2014, we put up scaffolding and painted it. We do regular maintenance on it every three to five years when we drain it and clean it out. It’s still in good shape and is still used for potable water and for fire prevention.”

Mount said the standpipe was built for fire prevention after much of downtown Troy burned in a fire in 1890. It stands 120-feet tall, is about 20-feet in diameter and has a capacity of $250,000 gallons.

According to Bill Rice Senior’s book, Troy: 1838-2006, the fire burned all of he buildings on the west side of the square, jumped over North Three Notch Street and destroyed every building on Love Street. The fire continued and spread to Oak Street.

Rice wrote that fire protection was limited at the time and Troy’s fire truck broke down. According to Rice, Mayor Charles Henderson telegraphed Montgomery for help and a fire truck was put on a train and sent to Troy. The fire truck arrived in time to put out the remaining flames.

Rice wrote that the disaster resulted in the construction of a riveted, steel plate, 250,000-gallon water tower on the north side of the square. Rice wrote that the city continued to be plagued by fires and an city firehouse was not established until 1906. The firehouse had two employees to maintain equipment, but fires were fought by the Charles Henderson Company and the all black Hook and Ladder Company. The city’s full-time fire department was established in 1914.