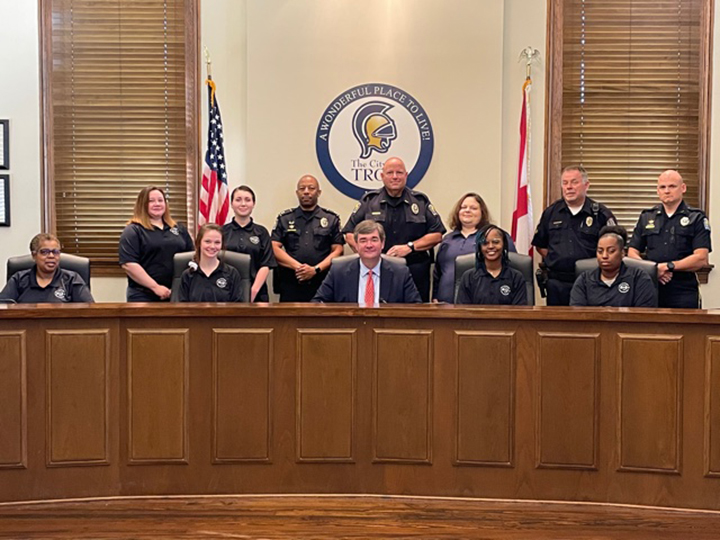 The City of Troy is celebrating this week as National Public Safety Telecommunicators Week, April 11-17.

“These are the first folks you talk to when you make a call to the police department of an emergency call to 911,” Troy Police Chief Randall Barr said. “They are the first voice you hear. They’ll take your information and pass that information to the appropriate agency and get first responders on the move.”

Barr said the city’s safety telecommunicators have a critical job. He said they have to determine what the emergency is, collect all necessary information and then get the proper emergency personnel in place to respond.

He said Troy’s call center acts as the dispatch for the entire county. He said all 911 calls are routed to Troy and the 13-person staff has the responsibility of making sure those calls are addressed as quickly as possible. He said Troy dispatches for Troy and Brundidge, but passes the county 911 calls to the Pike County Sheriff’s Office, which handles its own dispatch.

“They have a difficult job,” Barr said. “It can be quiet for a long time and then everything can happen all at once. They may have four or five wrecks at once and at the same time, they have a domestic violence call coming in. They have to handle calls in difficult situations. A lot of times they have to keep people on the phone so they can relay information to the officers going in.”

Barr said the dispatchers also have the responsibility of gathering as much information about the situation as possible, then pass that information on to the responding personnel.

“They do an awesome job every day,” Barr said. “They have a high-stress job with a lot of responsibility. We’re very proud of them and what they do. We couldn’t do our job without them.”