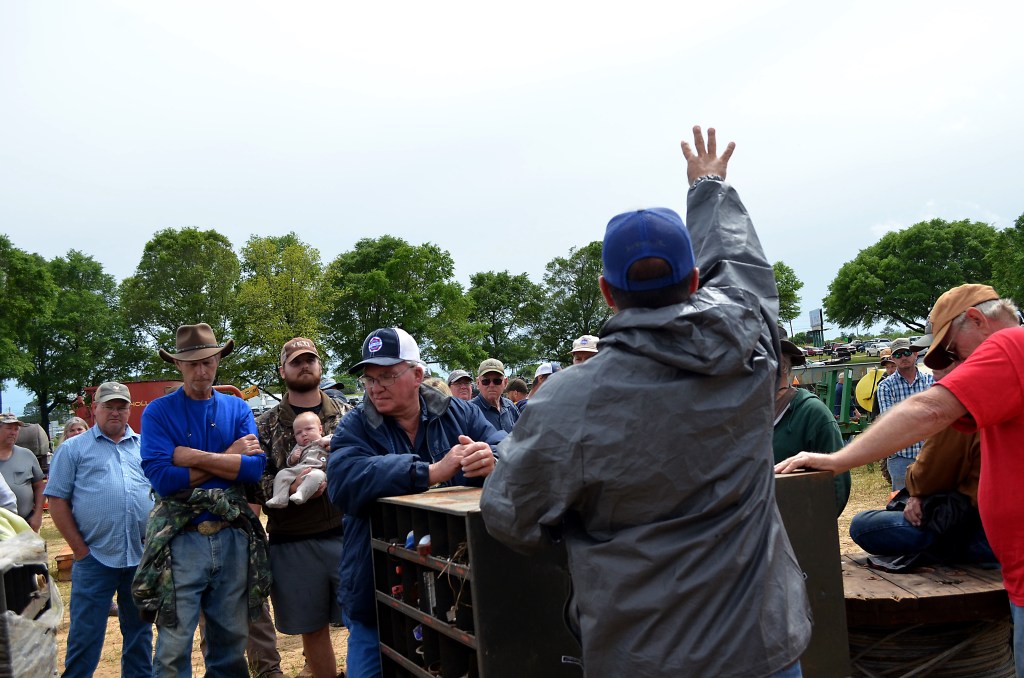 Photo/Jaine Treadwell A large crowd waited out the rain for the auction to begin on Saturday.

The Pike County Cattlemen’s Equipment Auction on Saturday was “at least” the second most successful in the auction’s history.

“Maybe the most successful,” said Johnny Garrett, Cattlemen treasurer. “We know it was a tremendous success. However, we won’t know exactly how successful until Wednesday when we get everything in. But people had stimulus money to spend and they were ready to get out and do something. It was a good day for an auction. We thank all of those who brought items for sale and all those who bid and bought.”

The Saturday morning rain did little to put a damper on the Pike County Cattlemen’s Equipment Auction at Cattleman Park. The auction got off to a late and slow start when the rain broke around 9:30 a.m. but shifted into high gear when the sun appeared an hour later.

“We had a large number of sale items and just about anything and everything that you could imagine,” Garrett said. “And, it all brought a good price. We sold every item and everybody, buyers and sellers, should have gone home satisfied.”

Bidding was competitive on the small ticket items as well as the large items. A syrup kettle went for $500 and a box of gourds for $25.  On the upper side, were a pontoon boat, an Amish-style buggy and 50 bicycles.

“We were going to bid the 50 bicycles one at a time but a man from South Florida got the first bid at $55 and then bought all 50 of them at the same price,” Garrett said. “The buyer said he could go back to Florida and make a fortune. That was a big sale. But, then every sale was a big sale. The Pike County Cattlemen appreciate everybody who brought items for the auction, those who bid, those who bought and those who just came out and enjoyed the day. Each person made the auction a success.”

The funds raised by the Cattlemen’s annual equipment auction supports the Cattlemen’s youth programs including scholarships presented annually to graduating seniors from local high schools and for the upkeep of Cattleman Park and related expenses.

The Pike County Cattlemen welcome new members. Ownership of cattle is not required to become a member.