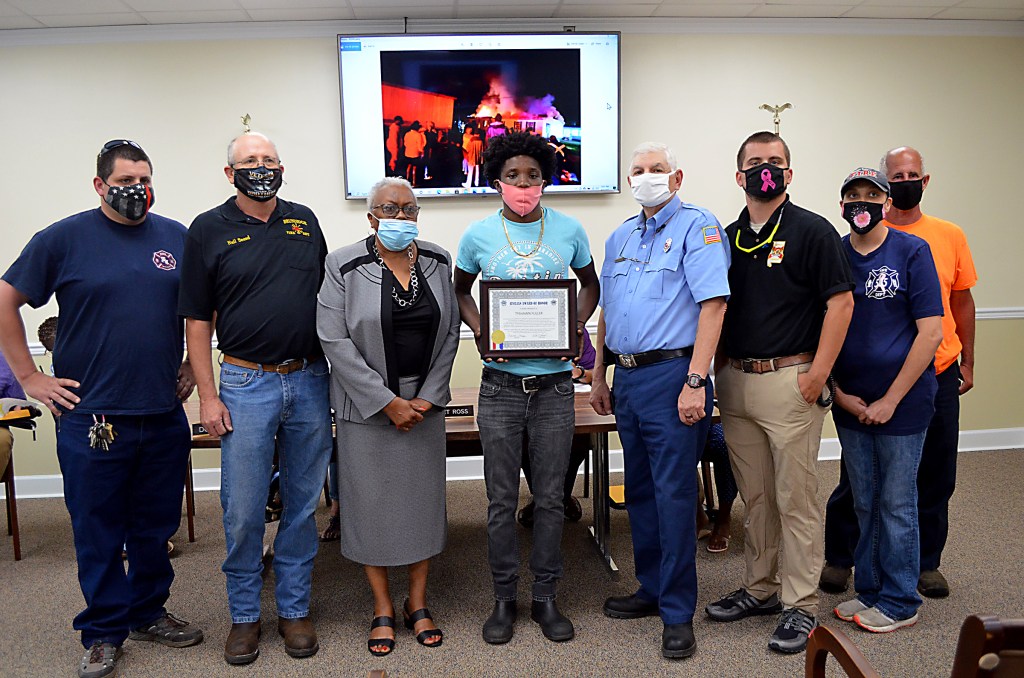 The Messenger | Jaine Treadwell Tyshawn Fuller (center) was honored for heroic actions during a house fire in March. Fuller saw a house on fire, but was unable to get the occupants to the door to warn them. He kicked in the door, went inside and was able to get the all five residents to safety.

At the opening of the Brundidge City Council meeting Tuesday night, Brundidge Mayor Isabell Boyd and Brundidge Volunteer Fire Department Chief Neil Sneed presented a Civilian Award of Honor to Tyshawn Fuller for an act of bravery that possibly saved the lives of five victims of a house fire on March 20, 2021.

Boyd expressed appreciation to Fuller for his heroic actions and to the Brundidge Volunteer Fire Department for its quick response.

Sneed said the Brundidge VFD responded to a fire on Country Road 3320 behind the Corner Store south of Brundidge.

“When we arrived the middle of the house had already fallen in,” Sneed said. “The five occupants of the house were standing in the driveway watching as their house burned. This young man, Tyshawn Fuller, had gone inside and gotten them out.”

Sneed said Fuller, a neighbor, saw the house was on fire and went to the back door to alert the occupants.

“The fire was in the ceiling and I don’t think they even knew the house was on fire,” Sneed said. “Tyshawn tried to get the occupants to the back door. When they didn’t come, he went around and kicked in the front door and got them out and to a safe place.”

Sneed commended Fuller on his efforts that possibly prevented injuries or saved lives on that cold March night.

“I told Tyshawn that if he ever wants to join the Brundidge Volunteer Fire Department, we have a place for him. We need people like him.”

In council business, the council discussed and appointed or reappointed members to city board/committees.

Those appointed upon acceptance are:

Willie Wright, city manager, said the city received only one bid from RPF Emergency Services of Hoover in the amount of $423,000.

Wright said RPF is not licensed to do demolition work. Poly Engineering recommended that the bid be rejected. Because only one bid was received, the city has the option to negotiate a contract not higher than the bid.

The lawn mowers will be purchase from the state bid list and the truck from Dixie Electric.