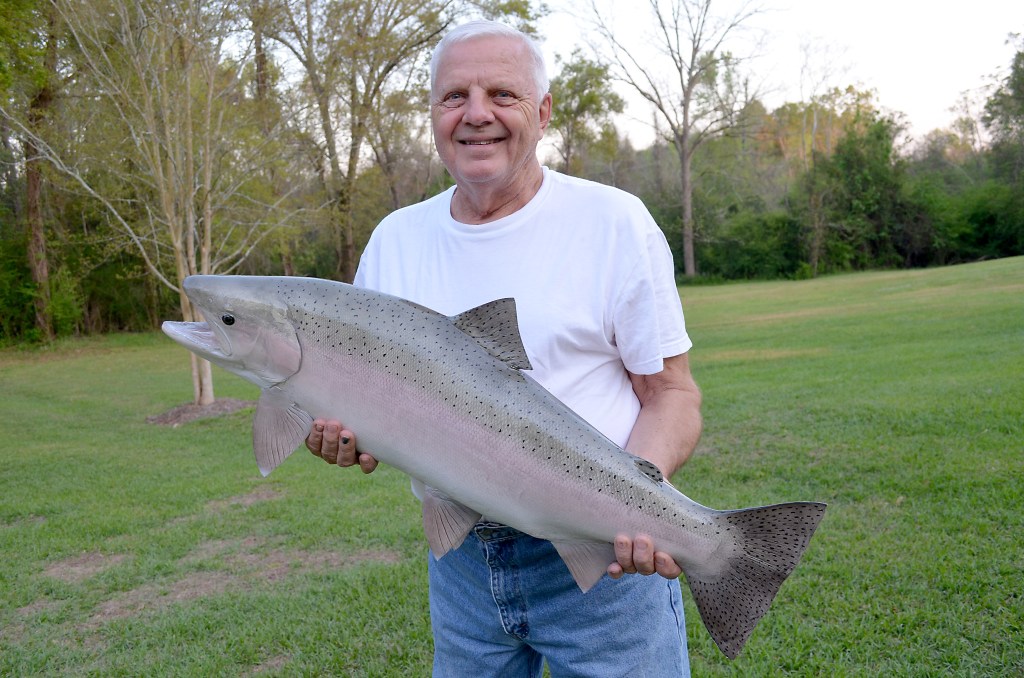 Jaine Treadwell | The Messenger The big one did not get away from Mike Richards. The trophy rainbow trout has been cast for mounting. The record breaker was caught on North Georgia’s Soque River. But, Richards has a fish tale with an unusual ending.

Mike Richards was “wading” in the crystal, clear waters of Georgia’s Soque River, rhythmically casting a fly line back and forth, his thoughts drifting to landing a big one, a rainbow trout that does not get away.

In his mind and in this place, Richards was as far from the sleepy, Tarentum community as he could ever be. He was a fisherman and he was fishing for the big one.

But, Richards never dared to dream of landing a rainbow trout that would carry the title of Georgia State Record. That was never a thought.

Mike Richards didn’t grow up fishing on river banks. His love of fishing came later when he and his buddies would get together for a weekend of camping and fishing in the North Georgia mountains.

“You pay to fish these private areas and you fish to release,” Richards said. “It’s all for the fun of fishing and the hope of bringing in the big ones.”

The late March weather was perfect fishing weather. Richards and his buddies were fishing with a Paradise Fishing guide in a private area of the Soque River.

“Every night, the fish in the private area of the river are fed protein so they are heavy fat,” Richards said with a smile. “That makes for good fishing. The water is clear and you can see the fishing running. I saw this really big rainbow trout and I cast for him, over and over but he was not taking the bait.”

When the big, fish hit Richards’ line, he didn’t realize it at first but, when he did, he couldn’t pull it in. In fact, in the trying his waders filled with water and several times, Richards found himself in the river waters.

“I just had to let him run with my line,” Richards said. “For about 20 minutes, it was him and me. Him trying to get away and me trying to keep him from it. That’s the beauty of fly fishing.”

When Richards got the fish to the net, he knew he had caught a big one but he didn’t know how big until it was measured.

Richards’ catch was 24 inches around the girth and 36 inches long and weighed 19 pounds and 13 ounces and topped the standing Georgia State Record for rainbow trout.

“To think that I had caught something that amazing with a fly made of feathers, hair and thread and no bigger than a gnat.” Richards said.

The fisherman watched as his dream catch was released back into the Soque River to, perhaps, be caught again or maybe not.

Richards had a record-breaking fish tale to tell.

However, there’s a snag in Mike Richards’ record breaking fish tale. He didn’t have a fishing license.

He was fishing in a private area of the river and no fishing license was required. So, his state record for rainbow trout is unofficial.

But, Richards said, never mind. Official records aren’t of importance to him.  He had the thrill of the catch and, too, the holder of the state record is the son of his fishing guide.

“I met Mark Cochran about 15 years ago when he was a young boy,” Richards said. “He has the official Georgia State Record at 13 pounds, 5 ounces. I’m proud for him.

“I’m satisfied with the unofficial record. I caught the big one that didn’t get away. Fly fishing is a whole ’nother degree of fishing and that’s enough for me.”