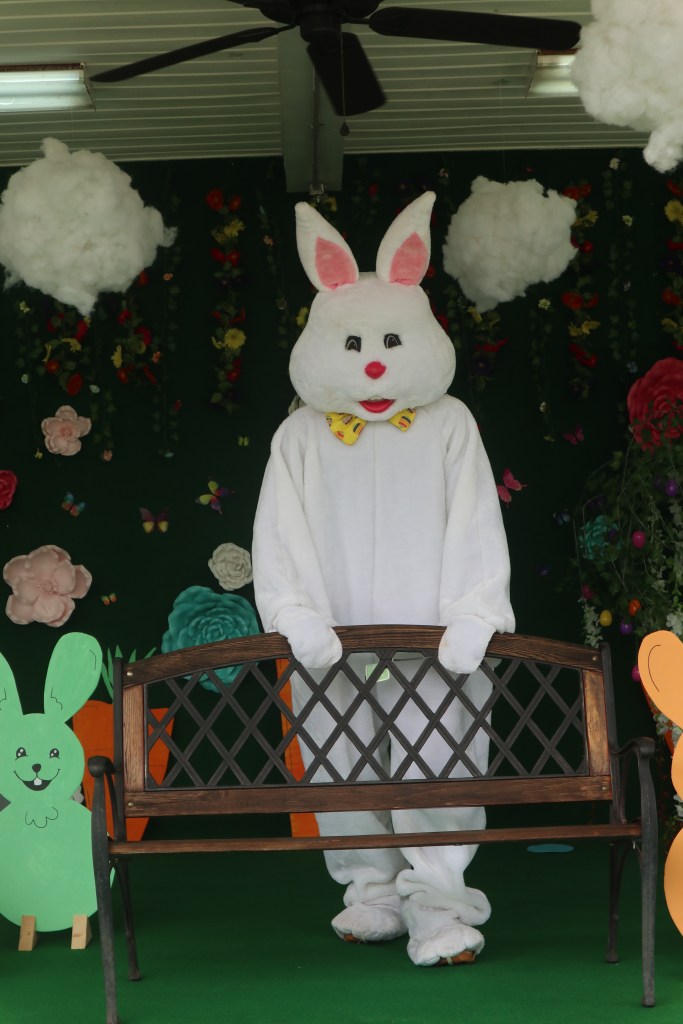 The Easter Bunny came hoppin’ down the bunny trail Saturday and found a great stopping place at the Tupper Lightfoot Memorial Library in Brundidge.

Garneshia Lampley, children and teens coordinator, said the Easter bunny stopped at the library and joined the children on an Easter egg hunt, led them in the Bunny Hop and had an all-around good time.

Before the Easter Bunny got back on the bunny trail, he took time to have pictures taken at the pavilion that has been decorated for Easter by the library staff with assistance by City of Brundidge employees.

“The Easter egg hunt was a lot of fun as children searched for and found 200 eggs the Easter bunny had hidden on the grounds of the Historic Bass House,” Lampley said. “Six golden eggs were found with special prizes inside. The children also participated with an Easter craft and also received a special Easter treat.”

Theresa Trawick, library director, said the library staff’s preparations for the Easter Egg Hunt and activities was outstanding, “as always.”

“I have seen photographs taken at the pavilion and the set looks professional,” Trawick said. “We are leaving the Easter set up to allow parents the opportunity to take their children’s pictures. The lights are turned on at night so it’s available throughout the day and until around 8:30 at night.

“We would like for those who take photographs at the pavilion to tag the Tupper Light-foot Memorial Library on Facebook.

Trawick said the library staff is very involved in the community.

“Families had the opportunity to paint and decorate a wooden egg,” she said. “The eggs are very colorful and well-designed. Several of the are in the widows at the Tup-per Lightfoot Memorial Library. Plans are to display them in several stores in the down-town area.”

Trawick expressed appreciation for the city’s strong support of the library and for the patrons who support the library’s programs and activities and all those who read books.