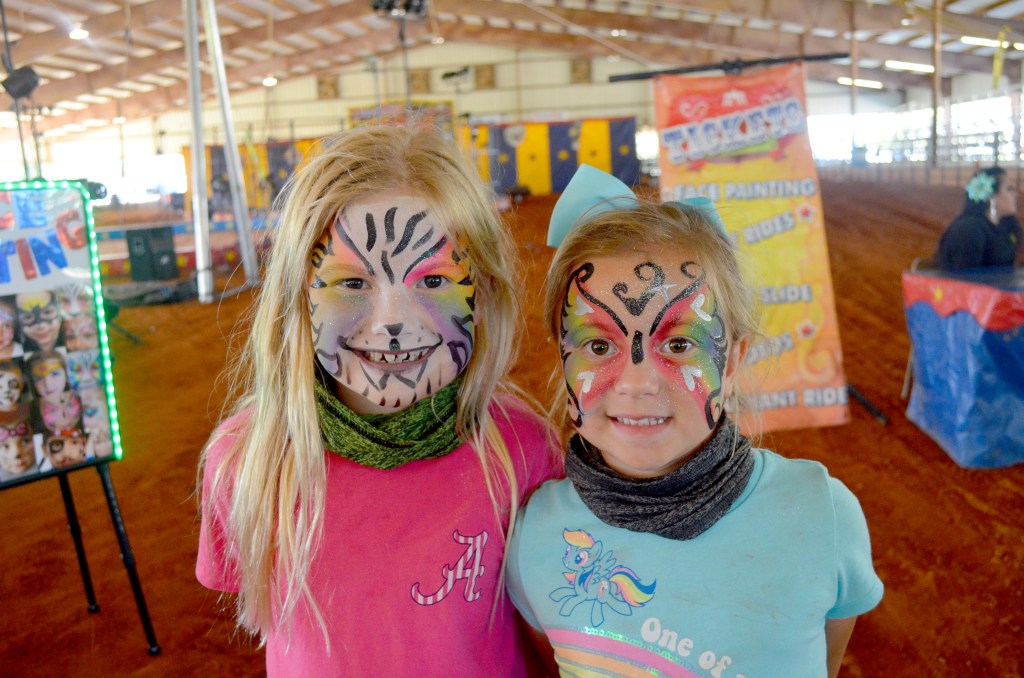 Jaine Treadwell | The Messenger Cate and Charlie Barron got face decorations before enjoying the fun and excitement of the Loomis Bros. Circus Monday afternoon.

From babies in arms to granddads holding tightly to little one’s hands, they came.

The Loomis Bros. Circus, billed as America’s Greatest Circus, opened Monday at Cattlemen Park and provided a rather-rare treat for “kids” of all ages.

The Loomis Bros. Circus is a “real” 3-ring circus featuring elephants, tigers, ponies, clowns, daredevils, acrobats, a live band and just the fun of being at a circus.

The circus featured two performances, afternoon and night, and will be back at Cattleman Park today at 4:30 and 7:30 p.m. Tickets are available at the gate.

Evelyn Prescott brought her two granddaughters to the Monday afternoon circus because she doubts that “the circus” will be around many more years.

“The Ringling Brothers Circus shut down and it was the biggest and the best,” Prescott said. “But, I hope the circus will always be around but, if it’s not, I want these girls to be able to say they’ve been to a circus.”

For some, it was the nostalgia of the circus that brought them to the Loomis Bros. Circus. For others, it was just something fun to do or something different to do.

For Lorie Welch, the circus was a chance to see animals she had never seen before, “except in pictures.” For Autumn Murphy’s “Nannie” it was the opportunity for them to do something together they had never done before. For Cate Barron and Charlie Barron, the circus was a “change of face” done by talented women with a brush in hand and a spray of glitter. For Colton Horner, the circus is all about cotton candy. For Cadi Bowden, it was an opportunity to introduce something new to a friend and to share the time together.

Tashia Snell was at the circus to “once again” experience the thrill of a three-ring circus.

“There’s just something about a circus,” she said.

An older gentleman, “Just call me Red,” said he remembers going to the circus as a little boy

“I was scared to death,” he said. “I’d never seen tigers and elephants except in pictures in a book. I was afraid. What scared me the most was the women on the trapeze and the men on those high wires. I was afraid they were going to fall.”

Red, laughingly, said children today probably don’t experience those kinds of fears. “But it’s good for kids to get a scare put in them every now and then.”

The circus may not be as the older generation remembers it. But it’s still the circus.

P.T. Barnum said that the noblest art is that of making others happy.

On Monday afternoon, Justin Loomis and “America’s Greatest Circus,” artfully, made many others happy.