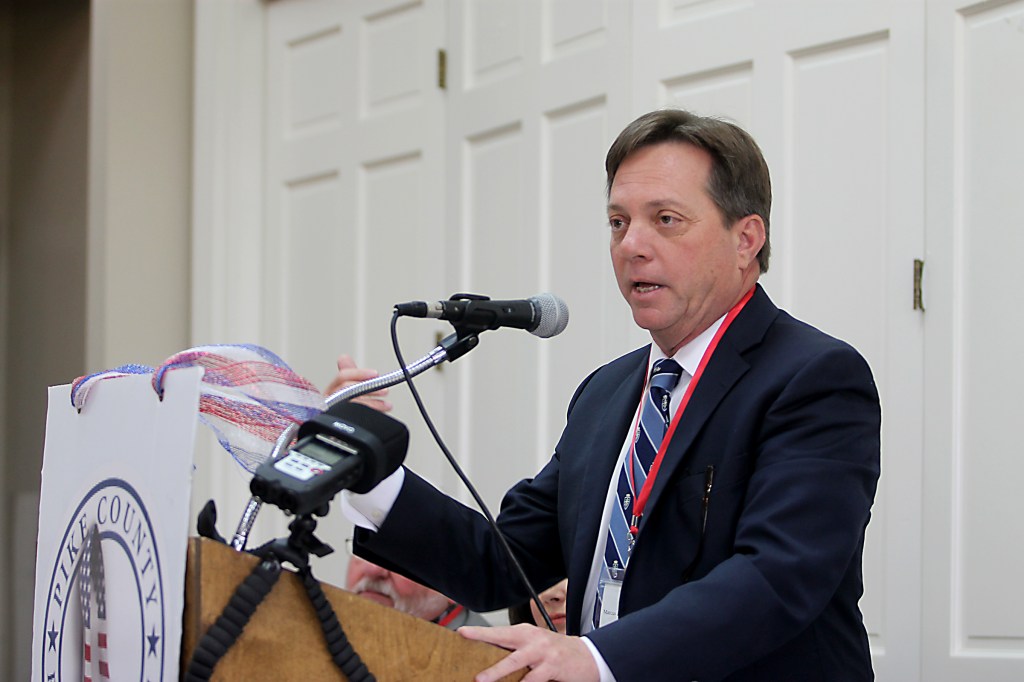 Huck Treadwell | The Messenger Troy City Council President Marcus Paramore talks with the Pike County Republican Women. He was one of four panelists that discussed local issues with the club.

The members of the Pike County Republican Women had some  poignant questions for four local leaders.

Virginia Hamm, Republican Women president, acted as moderator and asked the panel questions selected from club members. Hamm said questions were selected based on how many people showed concerns in the same area.

She said people had heard a lot of rumors about consolidation of the county and city schools systems and asked Paramore to update the club on whether or not consolidation was a possibility.

“There are a lot of rumors on consolidation,” Paramore said. “Rumors were really rampant before COVID hit. Now, that people are starting to get out again, the rumors are ramping up again. There are no formalized plans for consolidation that I am aware of today.”

But, he said, there has been a growing sentiment for Troy City Schools to bus children. He said the city school system currently doesn’t bus students, but county has a bussing mechanism in place. Paramore said people shouldn’t read anything into that, he was just pointing out the facts.

“Right now, there a lot more rumors than concrete plans,” he said.

Hamm asked how much money the county would receive from the CARES Act and how it would be spent and followed up with a question on how much the new judicial complex would cost and how it would be paid for. Sullivan said the county would receive $6.5 million, but the commission was waiting on a state committee to decide how the money could be spent locally.

“[County Administrator] McKenzie Wilson has been selected for that committee,” Sullivan said. “So, we’ll have a voice in the decision on how the money can be spent. But, right now, we don’t know how we can spend it.”

Sullivan said the total cost for the project would be $36.5 million and the project would be funded by a 1-cent sales tax that was enacted in 2017. He said the tax has generated about $14 million to date and generates about $4 million annually. He said former State Rep. Alan Booth and Sen. Jimmy Holley wrote the bill and it was worded so the tax would end when the new judicial complex was paid off.

Sanders was asked what project the chamber had in the works for the county.

“We’re working on a 200th birthday celebration for the county right now,” Sanders said. “We’re also looking into things people have been asking about, like a dog park and putt putt golf. Coming out of COVID-19, I’m not sure we’ll ever get back to what was normal, but we’re looking at everything possible to bring people in to locate or visit and shop in Pike County.”

Paramore said he had attended a meeting of the Troy Rotary Club and the club had secured a Rotary International Grant to help fund a dog park. But, Paramore said the project was in the early stages and a site had yet to be selected.

Cobb was asked about the current state of retail and industry in the county, especially the new Trojan Marketplace. Hobby Lobby opened last Friday.

“At this point, you really know as much as I do,” Cobb said. “They’re developing the outparcels now, and have been really tight-lipped on who will be in them. We have Hobby Lobby, TJ Maxx, Ulta Beauty, Five Below, Rack Room Shoes and Ross Dress For Less. In the outparcels, the one on the left if supposed to be  a Mexican cantina-style restaurant. But, I don’t know who it is. The Starbucks will be on the outparcel on the right.”

Cobb also said the Economic Development Corp. was also partnering with the Pike County Chamber of Commerce to work on quality of life enhancements.

“One of our major focuses is quality of life,” Cobb said. “The City of Troy does a good job of welcoming students back. But, there’s always room for improvement. We want to work on ways to enhance the quality of life for students.

“We also want to work on improving quality of life downtown. Troy has a historic downtown. We’re diligently trying to work on that. It’s in its infancy stages right now. But, we want a strong downtown. Downtown is the heart and soul of Troy.”