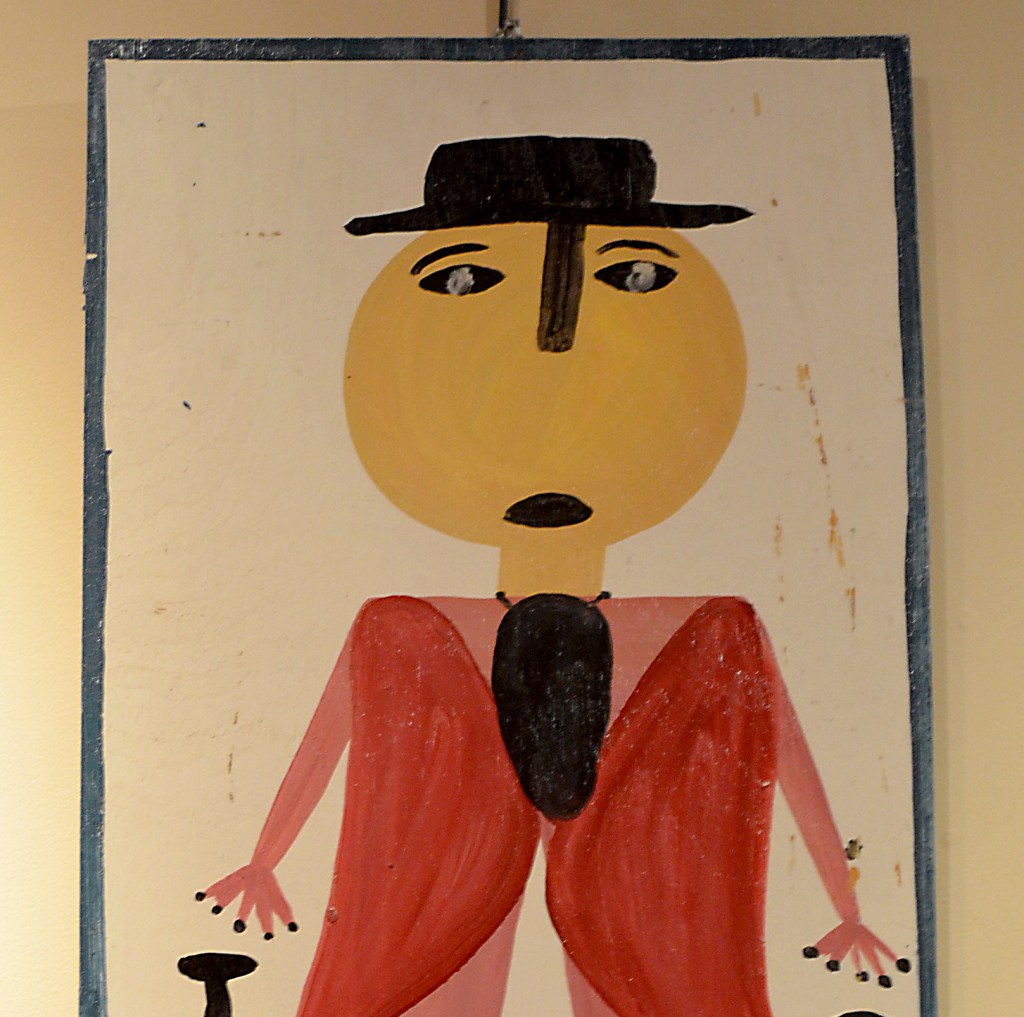 Jaine Treadwell | The Messenger Mose Tolliver’s ‘Self Portrait in Red with Walking Sticks’ is one of the pieces the Johnson Center for the Arts will sell to scale back its permanent collection.

The Johnson Center for the Arts is scaling down its permanent art collection by providing an unprecedented opportunity to purchase original artwork by highly regarded Alabama folk artist Mose Tolliver, or Mose T.

Brenda Campbell, JCA director, said the arts center has limited space to store and maintain its art collection so the decision was made by the JCA board of directors to sell a portion of its Mose Tolliver collection.

“There is a lot of continuing interest in the artwork of Mose Tolliver,” Campbell said. “The JCA is a strong supporter of the arts and, rather than have Mose T’s art stored, it would be better for it to be enjoyed by those who appreciate his talent and the role he, as an Alabamian, has played in the nationwide interest in folk art.”

Campbell said the Johnson Center for the Arts has 40 pieces of Tolliver’s artwork available for purchase.

The prices for the JCA collection of Mose Tolliver artwork ranges from $250 to $3,000.

Campbell said the higher priced pieces include “George Washington,” bust portrait; “Self Portrait in Red with Walking Sticks,” “Portrait of Nall,” “Woman in House,” and “Bus with Passengers.”

“We have pieces that are priced in the $250 to $400 range that include watermelons and snakes, fish and birds of different colors,” Campbell said. “They are all great pieces and will be at home in a lake cabin, a beach house or a family home.”

Campbell said Mose Tolliver grew up near Pike Road and was the son of a sharecropper. He attended school through the third grade. Although his family lived in what Tolliver said was a shack, his mama had pictures all over the walls.

Tolliver worked for a truck farm and later as a gardener. While working for a furniture company, a crate of marble fell on him and crushed his left ankle and damaged the leg tendons and muscles leaving him unable to walk without assistance.

“He is quoted as saying that he probably would never have painted if he had not gotten hurt,” Campbell said. “Mose T began to create art in his own way and on any surface.”

Tolliver became one of America’s most noted folk artists. Dr. Robert Bishop, director of the Museum of American Folk Art, said of Mose T’s paintings that his work could be hung beside a Picasso and there will be the same kind of creativity and deep personal vision in both. What better can be said of Alabama’s most noted folk life artist, Campbell said.