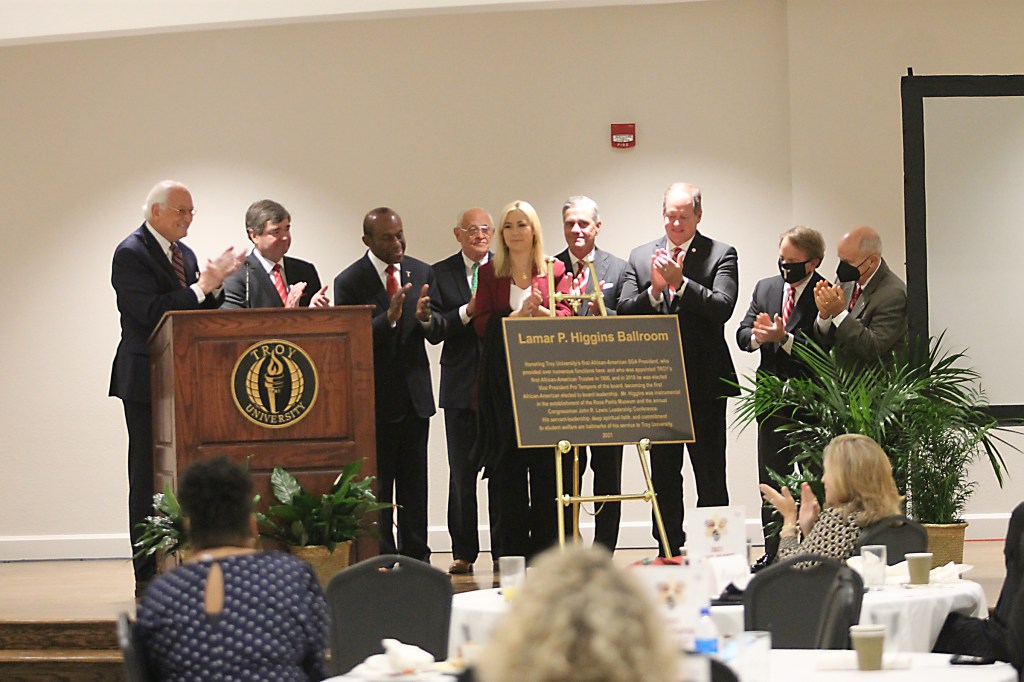 Huck Treadwell | The Messenger Troy University unveiled a plaque that will adorn the entrance to the Lamar P. Higgins Ballroom, formerly known as the Trojan Center Ballroom.

Troy University hosted the first Unity Prayer Breakfast on June 25, 2020, as a way of bringing leaders from across the county together to talk about the social injustice and racial tensions prevalent throughout America.

“Mr. Higgins was instrumental in us building and locating the Rosa Parks Museum on our Montgomery Campus on the very spot where Mrs. Parks was arrested,” Hawkins said. “It was Mr. Higgins’ idea to initiate the African American Leadership Conference which now, for two decades, has been the centerpiece of Black History Month at Troy. We owe so much to him.”

C. Gibson Vance, president pro-tem of the Troy University Board of Trustees, said the university’s culture is one of diversity and inclusion.

“No single person has helped to establish and maintain that culture more than Lamar Higgins,” Vance said. “From his years as SGA president until his time as vice president pro-tem of the board where he serves now, no one has loved Troy University more.”

In the documentary, “In His Own Words,” Higgins spoke of 1979 as the year that was the “reckoning moment” for the establishment of that culture at Troy University.

“That was a banner year of change for the university and change for the better,” Higgins said. “It was an opportunity for people to see that Troy could be something different.”

Higgins said until then, he did not think people had put it all together.

“But, to get to Homecoming 1979 and see a Black quarterback, a Black drum major and a Black homecoming queen crowned by a Black SGA president, was our reckoning moment.”

Higgins said Troy University has been a part of his life for almost half of his life and during that time, he has tried to remind the University to be inclusive.

Now, he said, the students get it.

Students from across the country and the world, come together in the realization that more can be done than can be done divided.

Troy University gets it.