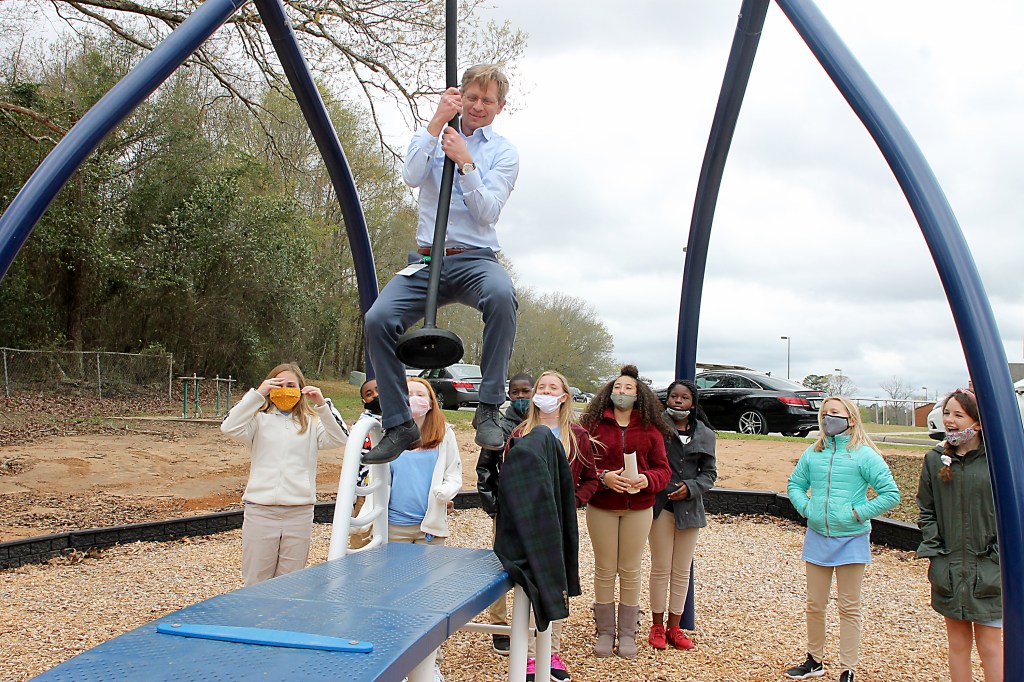 Huck Treadwell | The Messenger Alabama Superintendent of Education Eric Mackey jumps on the zipline on the new playground at Troy Elementary School. The playground was built through funds raised by the TES Parent Teacher Organization.

There’s more to school for small children than just reading, writing and arithmetic.

On Friday, members of the Troy Elementary School Parents and Teachers Organization gathered with school administrators to officially open a new playground at the school.

TES Principal Teresa Sims said playgrounds play an important part in a child’s development when it comes to physical and social skills. She said the school was built in 1990 and one of her top priorities as a principal was to update the school’s playground equipment.

She said to get the project done, she turned to the school’s Parents Teachers Organization. She said the PTO had done a phenomenal job of rallying the community behind the project.

“I want to thank everyone for every dollar they contributed,” Sims said. “I also want to encourage everyone to shop local and support those businesses that supported our school. The PTO raised the money and put in the sweat equity to make it happen.”

Troy City Schools Superintendent Cynthia Thomas said she was “very grateful for the people that put in the sweat and tears to make the playground possible for our children.” Thomas also introduced a special guest for the day, State Superintendent Eric Mackey.

Mackey said he wanted to be in Troy for the opening of the playground, because Troy Elementary School held a special place in his heart.

“I wanted to come down and join y’all because this school is a special place for me,” Mackey said. “We all learn every day. I’m still learning to do a better job and to be a better person. My best teacher and mentor was (former TES principal) Hank Jones. He was the greatest mentor in my life. Mr. Hank is not with us, but he would be very, very proud of what has gone on here today.”

Caleb Dawson, a member of the PTO’s playground committee, said a lot of hard work had gone in to the playground.

“Our group members were really invested in the playground, the kids and the community,” he said. “We raised $200,000 in grants, cash and in-kind contributions. I want to thank all of the people who invested their money and their time in this project. The PTO is very grateful for their contributions. We hope the kids will see the example the PTO set and continue to invest in the community.”

Debra Lauer said the PTO still has other projects currently in the works. The one at the forefront is to raise money for teachers for classroom expenses.

“We want to show our appreciation for teachers,” Lauer said. “We just launched a classroom grant program. Our goal is to get money in the hands of all the teachers. When we started this, we weren’t sure if we would be able to do it this year because of COVID. But, as soon as we saw we would have money available, we got it into the hands of the teachers.”

Lauer said the PTO had administered several $2,800  grants to teachers in the fourth, fifth and sixth grades. She said the money helped teachers to purchase manipulatives that were used in hands-on learning.

Lauer said the grants cap at $3,000 and she hopes the grants encourage teachers to be innovative and bring new methods of learning to the classroom.