Raymond Ledford shaves Forrest Lee’s head for a good cause 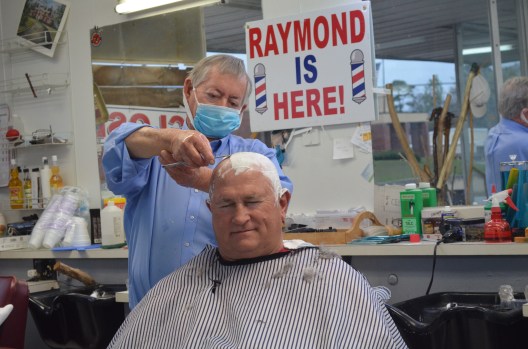 Jaine Treadwell | The Messenger Raymond Ledford gives Forrest Lee a shave for charity. Lee had his head shaved to raise money for Cara Carter Hussey, who is undergoing treatment for cancer. 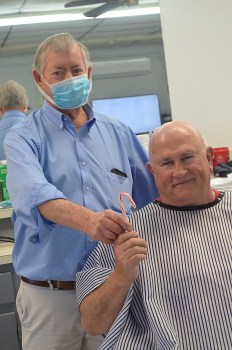 Lee was rewarded with a peppermint candy cane for his effort.

The sun was just peeping over the horizon when Troy barber Raymond Ledford turned on the clippers.

He had a job to do and it had to be done before the sun was high.

If the sun bounced off the soon-to-be bald heard of Forrest Lee, it would blind half of Pike County, Ledford laughed.

Ledford began to cut a path down both sides of Lee’s head leaving a strip of hair standing at full attention right down the middle. Lee had long wanted a macho Mohawk haircut and, for about a New York minute, he sported one. Then, the barber plowed the Mohawk down and Lee’s smile turned upside-down.

The scene was early morning Friday. Ledford and Lee were featured on “The Cut” broadcast live on TV2, Troy Cablevision and on Facebook.

“The Cut” is a fundraiser for Cara Carter Hussey and her family as she is undergoing cancer treatment at M.D. Anderson in Houston, Texas.

“The idea just came to me one morning that, if Raymond would cut my hair and shave my head and it was broadcast live, that might be a good fundraiser for Cara and her family,” Lee said. “I didn’t have to twist Raymond’s arm.”

Ledford was well aware of Lee’s long desire to be macho so, why not give him a Mohawk, let him enjoy it for a look and then buzz it off and pave for a head-shave.

Lee was all for the idea of having his head shaved before a live audience. Why, not? He might “come off” as the Telly Savalas of Troy.

More importantly, “The Cut” would be an opportunity for members of the community to support Cara and her family.

“While Cara is at M.D. Anderson, and it’s been about five weeks now, her family is not able to visit her in the hospital so her husband, Donnie, is staying in an apartment which is more cost effective than a motel or hotel,” Lee said. “Cara’s daughter, Lauren Boutwell, and son, Reid Knighten, are able to visit with her when she has the opportunity to stay at the apartment.”

Lee said Cara’s mother, Irene Carter, is in her 90s and is in the care of the family.

“Cara has touched so many lives in so many ways, in the community and in the three churches on the Methodist charge where she is a pianist,” Lee said.

“Cara was the guidance counselor at Goshen and Pike County high schools and retired from Zion Chapel as guidance counselor,” Lee said. “She is a wonderful, loving and giving person. ‘The Cut’ is a way to give back to her in a small way.”

Lee said Donnie Hussey called last night to thank everyone for all their prayers, thoughts and the kindnesses shown.

“Cara was there at the apartment with Donnie and it was good to hear her laugh,” Lee said. “Jodie and I enjoyed talking with them. They are wonderful, salt-of-the-earth people and they would be doing the same for others who are in similar situations. They are grateful for the love and support that is shown to them and asked for continued prayers.”