‘Life’s been a lot’ For centenarian Henry Grider 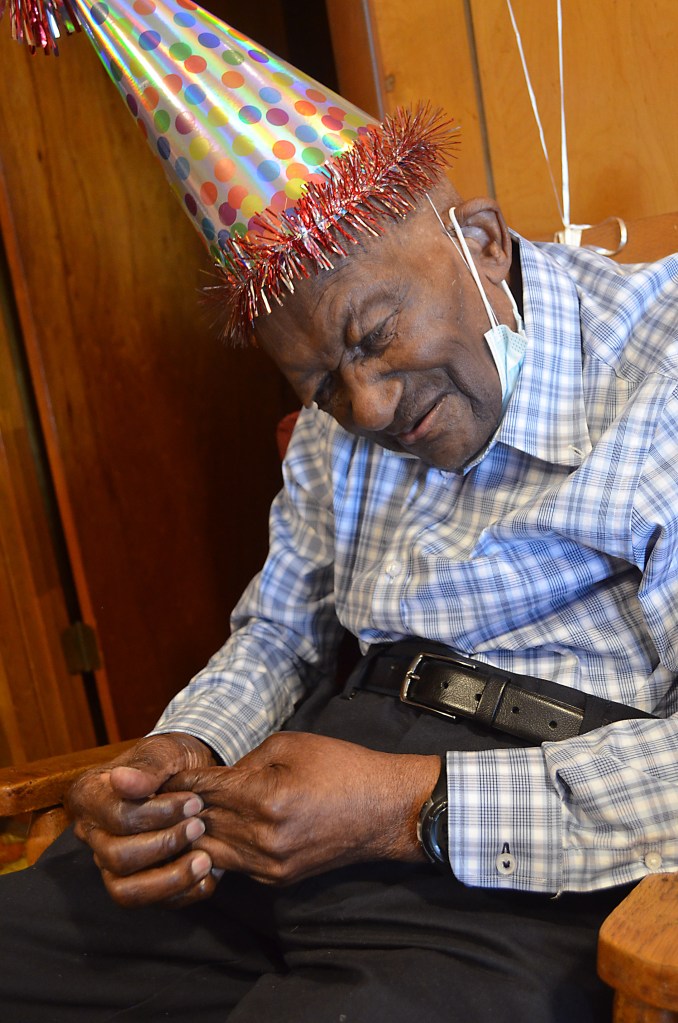 Jaine Treadwell | The Messenger Henry Grider of the Josie community celebrated his 100th birthday, March 16, 2021, remembering his blessings, his wife, Addie Pearl, their children, Bernice Grider, Betty Grider Curry and two sons, Joe, deceased and Albert, his parents and the many who helped him along the way.

Henry Grider’s centenarian story is not unlike that of others who grew up on a hard-scrabbled farm, worked their hands to the bone all their lives, loved their families and the Lord and feel blessed to have lived so long.

Grider of the Josie community is happy to say he’s 100 years old and that he’s looking forward to another day.

He has a sharp mind and a good memory and he’s up walking and not bed ridden. Grider has a good sense of humor that endears him to his family and friends.

“The old rooster crows a lot of the time,” he said, laughing.

Grider counts his blessings every day. Chief among them are his two daughters, Betty and Ber-nice, who care for him and keep him company. However, Grider said they need to let up on the push for him to exercise. His exercise is laughing and he gets “plenty of it.”

Grider came into the world March 16, 1921, and, like most babies, he came in crying, but not for long. Even though life was often hard, Grider found reasons for happiness all around him.

On Sunday before his 100th birthday on Tuesday, a “flood of folks,” family and friends, came to celebrate with him and it was a great day.

Grider said his mama and daddy tried to get married at age 15 but the preacher wouldn’t let them say “I do” until his daddy’s daddy signed for him and his mama’s mama signed for her.

“Tanyard School was too far off and it was too cold trying to get there,” he said. “I never had no schooling but I learned by heart.”

Grider grew up doing a big boy’s job behind a mule and working “to keep life going.”

“We had a garden with all kinds of vegetable greens, a tater hill and a cane patch,” he said. “You can’t get syrup no more like what comes from cane juice that was cooked in a kettle over a fire. Chickens from a store ain’t nothing like a yard chicken and store milk won’t hold a light to grass milk.”

Grider talked about slipping around and enjoying a sweet plug of Brown Mule tobacco.

His Mama tore him down for fooling with tobacco. “But she liked her Bitter Dental snuff,” he said laughing.

“If I didn’t pay mind to the cow and she’d go off grazing in bitter grass, Mama got the yard broom and put it on me. My mama cooked the best sweet potato pies, oh, how good. I’d say, ‘Mama, don’t you need to go out to the mail box?’ While she was gone, I’d slip and I’d cut me big piece of her good ol’ pie.

“One time when I was married, we had the last watermelon out way back. I wanted it bad, so I said to my wife, ‘Don’t you need to go to the store?’ I went and cut the watermelon and said, ‘Lord, please let me eat it all while she’s gone.’”

Grider laughed at the memories of so long ago and rubbed his hands as he remembered the struggles to make a day’s wages.

“Let me tell you something ….”

Grider said he worked long and hard on halves to buy a spot of land of his own. He worked the land, hauled cows, worked at fertilizer plants and at sawmills – hauling lumber and driving a lumber lifter. He drove a front-in loader and was hauling dirt for the Pike County Commission when his eyesight “went out.”

“I worked for many good people. I’ve been blessed,” he said.

“Early on” Grider joined the Mt. Hermon Baptist Church near Banks and, even when times were especially hard, he put a nickel in the church plate.

“Let me tell you something …”

“At Christmas time, men at the church would give the little children money coins wrapped in gift paper,” he said. “It was not much but a lot for little children.”