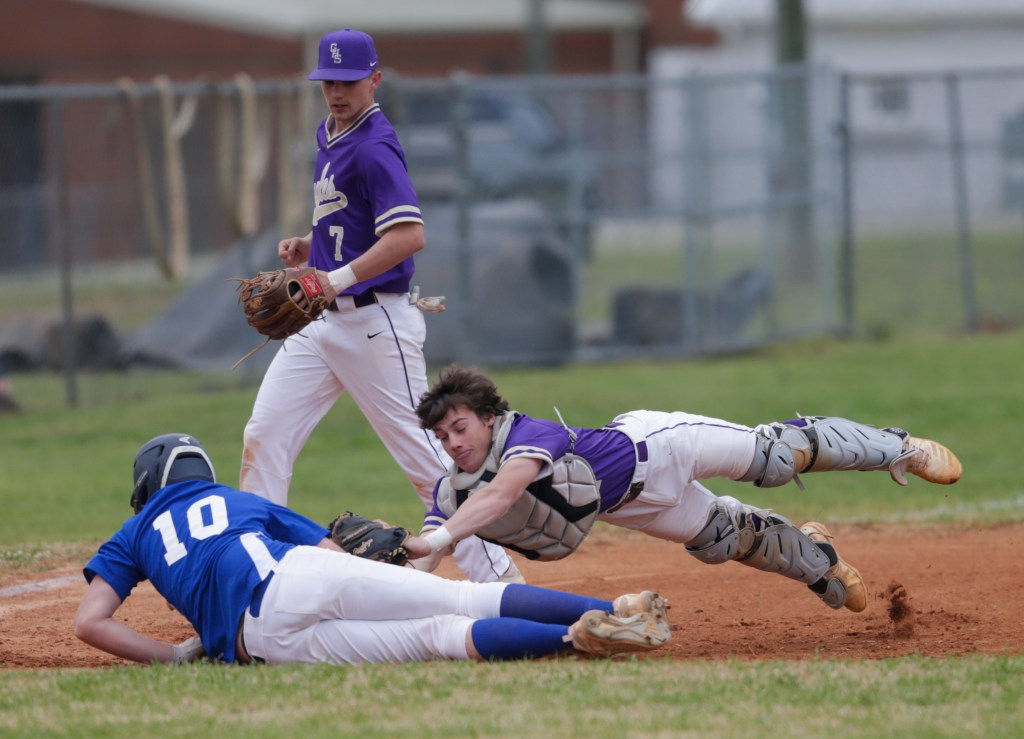 GOSHEN – Goshen High scored five runs in the second inning and five in the fifth en route to a 14-4 win over Highland Home Friday afternoon in Goshen, improving the Eagles to 6-1 on the season.

Andrew Galloway paced the Eagles at the plate with three hits, while Peyton Stamey drove in four runs and earned the win on the mound, allowing only one earned run on four hits while striking out four.

Highland Home had jumped out to a quick 1-0 lead in the top of the first, but Goshen responded with three in the bottom half of the inning when Tyler McLendon, Carson Williams and Nicholas Walters walked, and all scored in the inning to put the Eagles up 3-1.

Galloway got his first hit of the day in the bottom of the second, McLendon then singled, Williams was hit by a pitch, Jeff Warrick walked and Walters singled, with Bryce Williams and Stamey following with singles to put the Eagles ahead 8-1.

The Flying Squadron got two back in the top of the third, then Goshen tacked on one more to take a 9-3 advantage as Galloway singled and scored when Warrick reached on a fielder’s choice.

Highland Home scored one more run in the top of the fifth, and Goshen put the game away in the bottom half with five runs for the 14-4 win.

Galloway led off the rally with another single, McLendon and Carson Williams singled, Warrick reached when an infielder could not handle a fly ball, Blake Saupe reached on a fielder’s choice, Bryce Williams walked, and Stamey singled for the 14-4 win.

The Eagles were led by Galloway’s three hits, while McLendon and Stamey had two apiece. Carson Williams, Walters and Bryce Williams had one hit each.

Goshen Head Coach Robby Kinsaul believes the balance throughout the batting order, the defense, and the pitching has been instrumental in the fast 6-1 start for the Eagles.

“I’ve been stressing to the players that we need to focus on getting be better the next time out, and I believe we’ve really done that,” said Coach Kinsaul. “Everybody in our lineup in the last four or five games, has been doing a really good job. I’ve stressed to our players that with a runner on second or third, with less than two outs, we have got to put the ball in play. We can’t strike out. And today, our number nine-hole hitter, Andrew Galloway, went 3-for-3. Anytime you can do that, it is going to do good things for the rest of the lineup. I was proud that Peyton was able to go five innings, which really helped us. Five of those runs we pushed across in the fifth really helped. I thought we also played well defensively. Our players did a lot of really good things that they are doing on their own.”