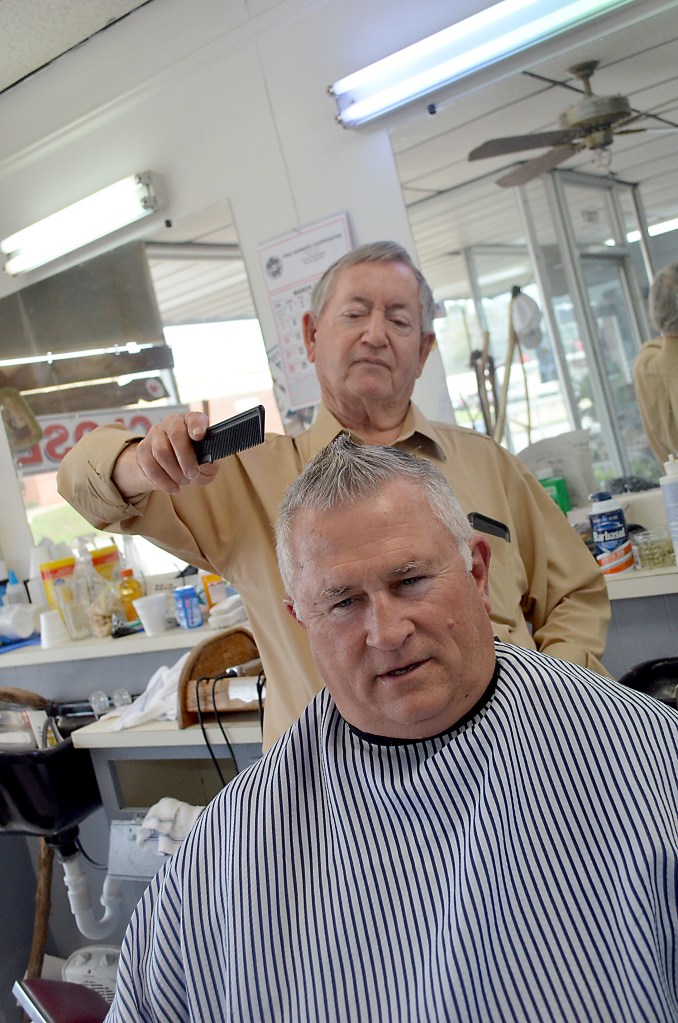 Jaine Treadwell | The Messenger Troy barber Raymond Ledford prepares Forrest Lee for a practice run for a spacial haircut. On Friday, Ledford will give Lee a Mohawk. After the first trim, Lee will pose for pictures and then have Ledford shave his head to raise money to help Cara Carter Hussey’s family. Hussey is currently undergoing cancer treatment in Houston, Texas.

Ledford and Lee will be the leads in “The Cut,” which is a fundraiser for Cara Carter Hussey who is undergoing cancer treatment at M.D. Anderson in Houston. The donated funds will be dedicated to assisting Cara’s family with travel and lodging during her stay.

The cast of “The Cut” will also include those who donate to the live production of “The Cut” at 7 a.m. Friday at Raymond’s Barber and Style Shop on South Brundidge Street in Troy.

Lee quickly admitted that he has always dreamed of having a Mohawk haircut yet he came to the rehearsal with another hair fashion, a spike. Ledford quickly whipped the spike into a Mohawk.

Lee will model the Mohawk at “The Cut.” Then, he will be available for photos with his “hawk” but only for a short time. As donations come in, Ledford will turn the clippers up to high gear and slowly buzz off the Lee’s Mohawk. Then, donations dictating, the barber will lather and slowly shave off Lee’s Mohawk. He will continue to shave until “the” Forrest is as bald as an eagle.

“We appreciate Raymond for agreeing to do this to help raise funds for Cara and her family,” Lee said. “‘The Cut” will be broadcast live at 7 a.m. Friday on TV2, Troy CableVision and on Facebook.”

For the fun of seeing Forrest Lee’s wavy locks come off and flutter to the floor, Raymond’s Barber & Style Shop will be open to the public for “The Cut.”

Contributions to the Cara Carter Hussey fundraiser will be accepted at the barber shop or may be mailed to Stephanie Snyder, 5850 County Road 2290, Goshen, AL 36035. All donations will be greatly appreciated.