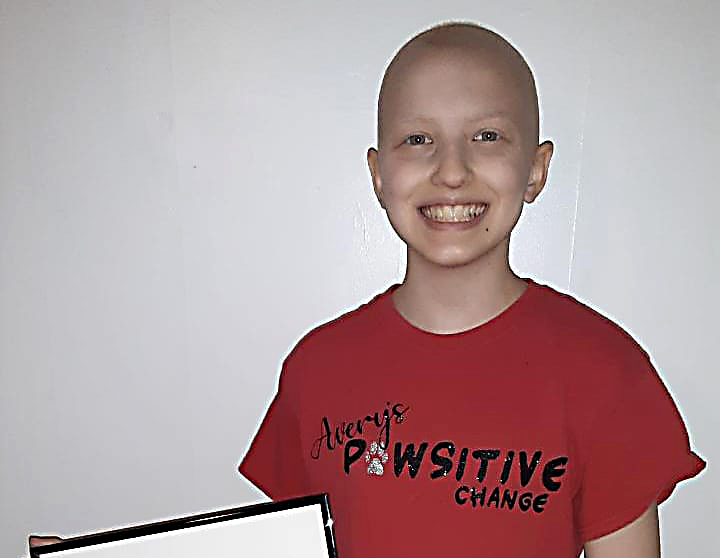 Contributed Photo The Humane Society of Pike County received a gift card from Avery Sontheimer of Corry, Pennsylvania, to help the animals at the Troy Animal Shelter. Avery was diagnosed with Ewing Sarcoma Cancer but she continues to keep helping animals. For her love and support of homeless animals across the country, Avery received PETA’s Hero to the Animals Award.

Donna Brockmann is often misty-eyed when she talks about animals that are unwanted, unloved and mistreated. But, reading the note from a young girl who feels exactly the same and is doing something to make the world a better place brought tears.

Brockmann, president of the Humane Society of Pike County, received a note from Avery Son-theimer of Corry, Pennsylvania that included a five-dollar gift card for the Troy Animal Shelter.

“Avery is a 14-year- old who, in March 2020, started her own mission of donating gift cards to random animal shelters, rescues and humane societies all across the United States,” Brockmann said. “She donates the gift cards in appreciation for those care for these unwanted animals and with hopes that the donation could make their lives better.”

To date, Avery has mailed 3,000 gift cards all across the United States for the love of animals.

“Avery is such a precious person with such a buoyant spirit and, even though she is battling this horrible disease, cancer, she remains dedicated to her mission of helping animals.”

Avery spoke by phone on Tuesday about her mission and her appreciation for those who care for abandoned animals.

“There are so many animals in this world that need help and to be cared for,” Avery said. “So many that are abandoned and never have a place to call home. I’m so thankful for the people who care for them at animal shelters and rescues and through humane societies. These people are my heroes and some animal’s hero every day.”

“It’s just who I am,” she said. “I love cats and dogs, especially those that need second chances at happy lives.”

Avery said she doesn’t know why anyone would mistreat a helpless animal. Her heart goes out to them.

“I just fall in love with cats and dogs that are homeless and I know that five dollars is not much but maybe it will buy a bag of food or a toy. It’s just what I can do right now.”

Random shelters and rescues receive the notes from Avery thanking them for helping animals. Avery’s hope is that others who share her passion for animals will do what they can to help homeless animals, because “animals can’t help themselves.”

Avery’s desire is to, one day, own a shelter for homeless animals and she would like for it to be as big as all outdoors.

But for now, while she is on the battleground fighting cancer, the gift cards are what she can do and what she will continue to do to make life a little better for a homeless animal somewhere.

“I want to make a difference as long as I can,” Avery said.

Those who would like to support Avery’s dedication to homeless animals may mail her at 351 E. Pleasant St., Corry, PA 16407 or to know more, go online to Avery’s Pawsitive Change.