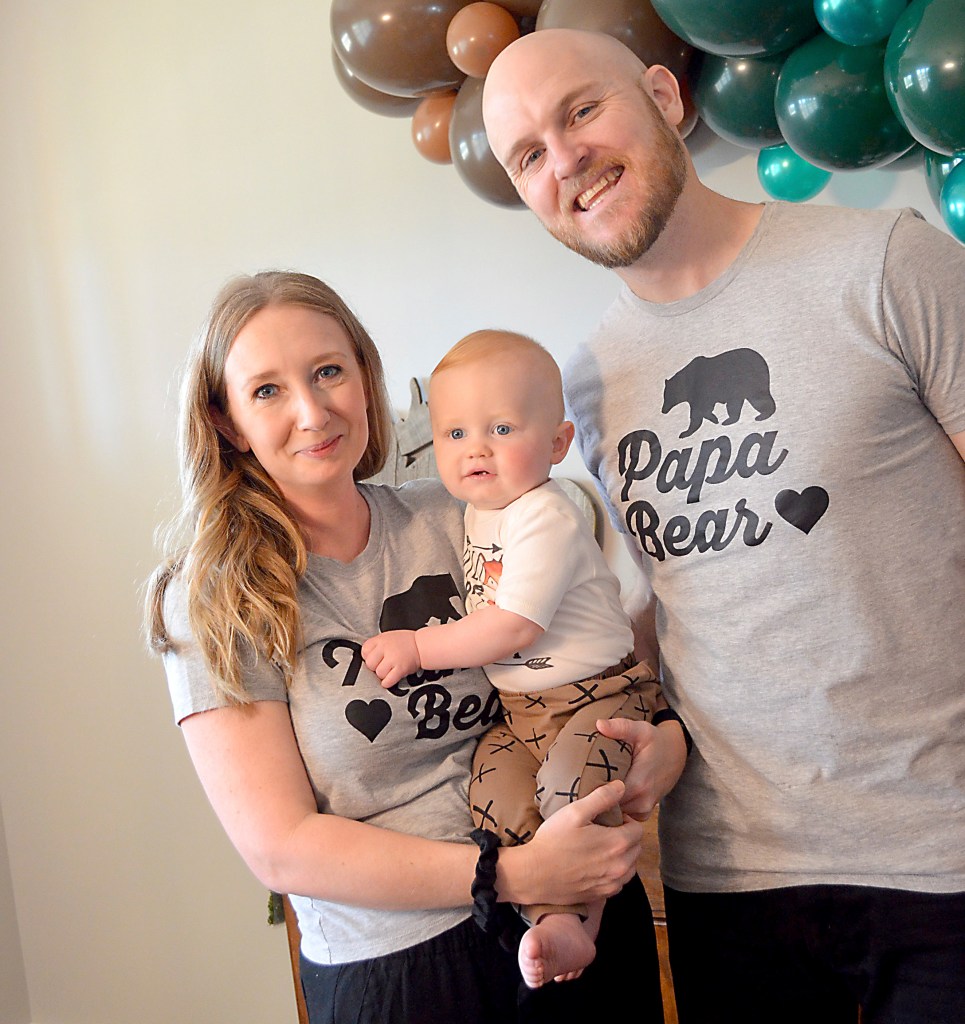 Jaine Treadwell | The Messenger Eli Connally celebrated his first birthday on Sunday with family members at his home in the Henderson community. Ryan and Savannah Connally were hopeful that Eli would be able to celebrate his birthday with the “village” that surrounds him. But COVID-19 restrictions were in place. Family and friends gifted him with items to be placed in a time capsule to be opened on his 18th birthday. In 2021, many couples are celebrating their babies’ first birthdays in the same way.

When Ryan and Savannah Connally moved from Washington, D.C., back to Pike County, her home county, the heart reason was to be near her family.

“They say raising a child takes a village, and we wanted our children to grow up surrounded by grandparents, great-grandparents and extended family just as we did,” Savannah Connally said.

Eli, the couple’s first child, was born in March 2020, just as the pandemic was starting in the United States. At that point, everything was unknown.

“Ryan and I arrived at the hospital just as many other expectant parents, full of anticipation,” Savannah said. “During our few days there, things across the country quickly began to change. Restrictions were implemented and there was discussion of looming state lockdowns. We brought Eli home not truly understanding the extent of what was happening as we were consumed by our new  role as parents.”

Family and friends dropped off care packages of Lysol wipes, bleach and other cleaning supplies that were starting to become scarce. They wanted to make sure the Connallys had everything they needed to protect themselves and their baby.

The next year went by so fast, but it was unlike anything like the Connallys had anticipated, like nothing anyone could have foreseen.

“Most new parents would agree that it’s an emotional time when your baby hits that milestone first birthday,” Savannah said. “You feel joy; you feel pride; you feel gratitude; you know you are blessed.”

The Connallys said, and other couples will probably agree, that another layer of emotion is added when their baby turns one and they’ve spent part of their life in isolation.

“Ryan and I know we are all so blessed to be healthy when so many people have experienced loss during the pandemic,” Savannah said. “But we couldn’t help but feel sad that so many people close to us have been unable to get to know Eli during his first year of life. We know this emotion is less about Eli’s experience and more about our experience as his parents. Ultimately, he has been safe, cared for and is a very happy baby despite being born in a time completely unlike any other in history.”

Eli’s parents know that he will not remember the uncertainty brought about by COVID-19. What he will know will come from stories told, books read and on whatever the internet looks like at that time.

So, Ryan and Savannah decided to put together a time capsule to commemorate Eli’s birth and first year of life that he will open when he turns 18.

“We asked family and friends from all over the country to send him personal stories, advice, tokens, photos and newspaper articles for him to look back on,” Savannah said. “The response was overwhelming and will require a rather large time capsule.”

What life will be when Eli and others born during the worldwide pandemic turn 18, no one knows. Who could have predicted the events of 2020? Only time will tell.

“Even though the last year has been difficult, Eli has given our family a profound sense of hope for the future,” the Connallys said. “We continue to move forward with absolute faith that God is in control no matter the situation. We are sure that other new parents also look forward with that same hope and assurance as they celebrate their babies’ first birthdays in the year 2021.